What show do you present on Triple R? When can we catch you on air?

Out on the Patio – every Wednesday 4pm-7pm

How long have you been at the radio station?

I started out doing fills in mid-2016

When did present your first show? How did that come about?

Like most, my first show was a Graveyard about two years ago. I then went on to fill in on as many shows as I could, before – much to my surprise – I was offered the drivetime spot to present Out on the Patio.

What is your earliest recollection of Triple R?

Born and raised in Melbourne, I can’t quite pinpoint the first time I saw a RRR bumper sticker, but I feel like I’ve always been aware of it. My older sister did high school work experience at Triple R when I was about 10, though, and I remember thinking it sounded like a pretty cool place.

I’m inspired by the need to rid the world of toxic masculinity. On a more tangible level, I think I’m generally inspired by people who do good yet retain humility. I’ve somehow managed to find myself with a partner and friends who are incredibly impressive people and let me bask in their reflected glow– intelligent, creative, funny, talented, driven people who make a truly positive difference in the world. But my favourite thing is that they’re just a whole lot of fun to be around. I’m also inspired by my family, especially Mum – she failed Year 12 after the sudden death of her father, only to go back in her 30s, after having three kids, to study for over a decade and become a psychologist. Now she spends her days helping people recover from trauma.

What genre of music is your favourite?

I love listening to a wide range so it is very hard to narrow it down to just one! Luckily, in my show I don’t have to – there’s a time and a place for folk, alt-country, garage, punk, rock, hip hop, pop, soul, funk, disco, electronic and techno; I just never know what time and place all the listeners are in, so I try to cover it all!

How would you describe your choice of music in food form?

Why is Triple R important? Why should we subscribe?

Triple R is integral to Melbourne – as a station it nurtures young talent, independent media, and gives a voice to those who otherwise wouldn’t be heard. As a community, it is inclusive, diverse, and tuned in to what Melburnians (and Australians in general) are all about. It truly is a unique asset and we should not take it for granted. Plus, subscribers are entitled to heaps of benefits (gigs, screenings, giveaways) all year round.

There’s a risk of being pigeonholed when you associate yourself with one particular scene, but the scene around Triple R – one that encapsulates a love of music, diversity, independence and creativity – is pretty great. 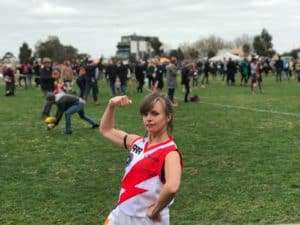 When Monique Sebire isn’t at Triple R, she works as a digital content coordinator and will soon be a secondary school teacher.

All manner of on-air shenanigans will be happening from Friday 17 August till Sunday 26 August.

Special guests on Breakfasters (Monday to Friday from 6am to 9am) will include:

* Comedian Anne Edmonds (having a chinwag at 7.45am Monday 20 August)

* Jen Cloher (breaking hearts with a live performance at 7.45am Wednesday 22 August)

More awesome people will be popping up on shows right around the clock.

For more information about Radiothon, head to:

WHEN? The on-air shenanigans happen from Friday 17 August to Sunday 26 August – but you have till 5pm Wednesday 26 September to subscribe and go in the running to win a slew of insanely awesome prizes.

The weird. The curious. The interested. Those with a hunger for more. We’re with you.


The spark in the dark. Discovery on the dial. The dangerous mind. Subversion of the status quo.

All manner of on-air shenanigans will be happening from Friday 17 August till Sunday 26 August. Special guests on Breakfasters (Monday to Friday from 6am to 9am) will include: * RVG (performing live at 8.45am […]

Reminiscing about events first attended over fifteen years ago can be fraught with vagueness and inaccuracy. All I remember about my first community cup was that it was freezing cold, cold beer was on offer, […]

Are you a Rockdog or Megahertz? Which band or radio station are you from? I am a HEGAHURT. And I really do, megaHURT! I am with 3RRR. As it has now gone national, which Reclink […]

Tegan Voltaire, The Voltaire Twins
Aside from music and everything creative, I love open-mind people, unexpected humour, seeing the world and nature, riding my bicycle, playing billiards. I’m also a fan of coffee, whiskey and most things vintage.
Jessica Stuart Few
Obviously to create music. My family. I love driving my Ferraris.
Yngwie Malmsteen
All of the above and more in my shed every Friday night
Hound
Anyone who welcomes a hairy, gold wearing, hot air blowing idiot to a dinner table is my scene.
Henry Wagons
My family, my friends, my home.
Cory Putman, Norma Jean
I like the beach more than anything. The beach feels like home all year round. In terms of a scene…I actually prefer to hermit most of the time.
Abbe May
My scene is finding any excuse to dance with my 2 year old daughter Ruby.
Matthew Hardy, Comedian
Local bands at sticky carpet venues. Vinyl. Social networking. Keeping healthy in order to play full throttle live sets. Loud rehearsals. Good people with creative ideas. PRIMITIVE ROCK.
Jon S Williams of City of Cool
The TV show “Full House
World Wild
Right now it’s a room with no lights on. An unmade bed. A laptop with 9% battery and a mosquito that just refuses to die.
Dave Larkin, Dallas Crane
It’s a delirium, really, but I like to live like this.
Hugo Race
Wherever there is music is where I feel most at home
Toby Robinson
Ep. 1 Series 3 of BBC’s ’Sherlock’ where Sherlock bungee jumps through a window and kisses Molly Hooper.
Miss Adelaide Everheart from Early Burley Burlesque
Flanelette pyjama pants.
Timberwolf
Leadfinger is a very strange band, hard to define, but we are free.
Stew, Leadfinger
I’m in with the Out-Crowd
Dave Warner
All the wandering. The bastards and the angels. The sound of the rain and the pains of the heart. The silence. All the houses and all the rooms. All the keys and phones.
Raised By Eagles
Tunes, mates, and honesty. No dickhead policy!
Buddha In A Chocolate Box
I like to think that I belong to the head-strong Independent Music Scene – where we – musos and audience and everyone in between – all make gigs/tours, recordings, releases happen for ourselves and work our arses off to keep it going for the rest of our lives – all for the love of Music!
Florelie Escano
Bed. Pringles. Whisky. Attenborough doco. Wham.
Marlon Williams
It’s Thonbury. It’s my dreaming. I’ve lived here 30 years and it’s evolved with me. The more I drink wine, the more wine bars appear in the neighbourhood. The more I eat, the more cafes appear in the neighbourhood. Fantastic.
Denise Scott, Comedian
Our scene is this big gorgeous wide world we live in all its majestic splendour!
Kim Salmon, The Darling Downs
All the kids who weren’t cool at school and still aren’t. Those people who didn’t manage to become awesome artists and uber hip performers. The raggy dolls who never found a way to make their raggy doll-ness work for them.
Jonathon Duffy
Our scene is folk that are interested in change. Not just music, but breaking the norm, the boundaries and stereotype of Australian ’rock/pop’ music. Unpredictable, the question marks, the new jokers in town. Don’t Believe The Haze.
Slumberhaze
I am a simple man. My scene is simple. I like playing metal and spending time with my family.
Waclaw ”Vogg” Kieltyka, Decapitated