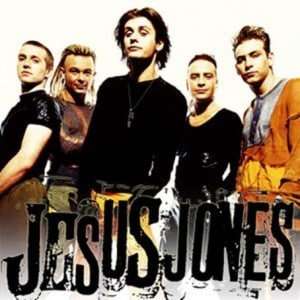 Luckily Edwards, and the whole band, loves to tour. “Between cycling and music there is not much time left, a bit of sleep now and again. We’re one of those bands who love touring. I’ve never understood those who moan about touring. We love touring and travel; loads of time to stick around and listen to music and more than that, get to visit loads of exciting places you wouldn’t have got to otherwise and that’s the view we had of Australia. So many great memories there. The last time we came was in 2011 and we had the most fantastic time. It was just so exciting to be there”.

Playing live and touring doesn’t seem to take its toll on the energetic, vivacious Edwards. He is proud of the fact that Jesus Jones has remained the original lineup, the same five guys it all started with. They have grown up together, and Edwards recalls a few on-the-road anecdotes that maybe the bassist wouldn’t want anyone to know about. “I remember being in a hotel in Washington DC, hearin 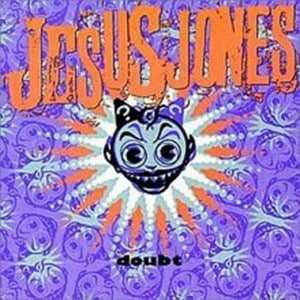 g the rest of the band having a party in the room above me and they were really quite raucous and I remember I got out of bed and, in my dictatorial mode, ran up the stairs. I walked into the room, and there on the sixth floor, I can see our roadie standing by the window and the window was open and I realized he was holding the bass player by his ankle. And I thought I’m just gonna pretend I wasn’t here”.

“Our bass player tends to monopolise these kinds of things. I think the crowning moment was when he woke up in a duck pond, in the Imperial Palace garden, in Tokyo. He was wearing someone else’s business suit. And he’s the last person in the world to wear a business suit”.

Now the leading purveyors of the early 1990’s Indie/Alternative Dance scene, Jesus Jones, return to Australia and are playing their influential Doubt album in full. Though Edwards says he “Cant give advice to bands these days the music industry is radically different,” he did in fact have excellent counsel: [pullquote]“One thing I would say is that you have got to be really inspired by what you do; this counts for more now than it did back then you have to do it for the love of the music everything else comes from that”.[/pullquote]

Personally Edwards states that: “Different people at different times have influenced me in my life. My first public performance was miming with fishing rods to a T Rex song. Glam rock that was the kind of stuff that influenced me earlier. I used to love The Sweet. After that I was very much into the Sex Pistols.

When they came out they were just brilliant; it was fantastic. For me, punk went off after that and I was much more into heavy guitar music, like Australia’s AC/DC. Soon after that I would say that guitar bands like REM leads into people like and U2 in the early days other bands like That Petrol Emotion and then there was Wonderstuff, who were friends with us. Beastie Boys and Public Enemy were brilliant, and at the end of the 80s the Acid House revolution did feel very much like punk in which it was clearing everything out and it was the only thing really worth listening to”.

[pullquote]“For me it then seemed a pretty obvious thing to take all those different influences and to bring them in to one band. I didn’t see why all those disparate things had to remain disparate”.[/pullquote]

Jesus Jones’ sound melds all different genres into a fabulous melting pot so it’s not surprising when Edwards says that he would describe their sound in food form as “Chili con carne; it’s spicy, lots of different ingredients and it’s going to make you feel hot and sweaty”.

Edwards jokes about expectations and says: “I would like to tell you that on this tour we’re going to bring on exploding dinosaurs or we are going to fire someone from a cannon. By and large we’ll probably do [our live show] a bit better these days, we ‘ve had a bit of practice over the last 30 years”.

“We’re playing Doubt top to tail. But when you program an album, I’m going back to the days of vinyl and Doubt was a 12” record, it doesn’t necessary work that way live, so we had to tweak a few things on some songs, and we can mess around with some songs. Obviously we wouldn’t mess with International Bright Young Thing and Right Here, Right Now because they’re amazing as they are so we will be keeping them the same, but there are songs on the record we were less happy with when rehearsing in the UK so they’ll be tweaked a little. So we’ll belt them out, and we’ll also do fan favourites, band favourites from other albums. [pullquote]And depends how badly we are going down, we might bash out something AC/DC”.[/pullquote]

Edwards continues, “You would have to be a fool to turn down (this tour). It is going to be a real privilege just to play there. We’d play in the back of someone’s garden. You’ll only have to provide a few beers”. 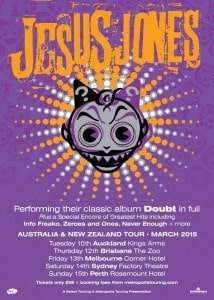 1990’s band Fridge have come out of deep thaw to play a run of shows across the country. After a few shows with Tumbleweed in Sydney, Brisbane and Adelaide, the band plays it’s first headline […]

Come and surrender your soul to the blues and grooving magic of the debut single from Willie J & The Bad Books, with Backdoor Man officially out in the world today. An energetic and passionate […]

Scene News: JEFF The Brotherhood Return to Australian Shores in July! Tickets on sale this Thursday 8am

Tegan Voltaire, The Voltaire Twins
My scene is finding any excuse to dance with my 2 year old daughter Ruby.
Matthew Hardy, Comedian
World/folk. Acoustic and proud of it!
Ilana Cravitz, The London Klezmer Quartet
Well these days my scene tends to revolve around my computer and being nudged by my dog to take her out for a walk. And then having my wife shout at me for spending time on my computer. I’m loving it actually. I’m quite relishing that scene. I miss them both very much.
Peter Hook, Joy Division/New Order/The Light
Wherever there is music is where I feel most at home
Toby Robinson
Right now it’s a room with no lights on. An unmade bed. A laptop with 9% battery and a mosquito that just refuses to die.
Dave Larkin, Dallas Crane
Sitting in the sun, in a nice chair, with a good book.
James Reyne
When I’m not working in the studio or doing shows I’m at home with my partner and our baby so I guess they are my scene.
Way of the Eagle
It’s beards.
Nathaniel Beard, The Beards
What’s my scene? well…
And another thing I’ve been wondering lately
Oh, baby,
Tell me where have you been?
Now the stage is set
Where’s my Juliet, baby?
Is it maybe
My Midsummer Night’s Dream?
What’s my scene?
Clowns
I love being on a little boat near home in South West Victoria with a fishing line in the water, the Sun coming up or going down. I also love walking the streets of Melbourne or Manhattan or many of the beautiful towns and villages of Ireland or anywhere. My partner and my family are central to it all. I also love being in the midst of a great music session, anywhere, anytime, being transported into the soul of the Universe.
Shane Howard
Going to the river on sunny afternoons with the blow up dingys and resting your beers on lily pads.
The Frowning Clouds
The beach. Tea with gin at your grandparents house. They have the best stories.
Betty & Oswald
Obviously to create music. My family. I love driving my Ferraris.
Yngwie Malmsteen
The TV show “Full House
World Wild
Our scene is folk that are interested in change. Not just music, but breaking the norm, the boundaries and stereotype of Australian ’rock/pop’ music. Unpredictable, the question marks, the new jokers in town. Don’t Believe The Haze.
Slumberhaze
I think my style is more just making cameos in everyone else’s scene.
Mojo Juju
If you’re a Max Chillington then you’re our scene.
Gunslingers