Tell us about your current tour…
I have a mixture of shows over the next three months. CHARLES HOTEL PERTH FRI JAN 23 will be a gig of Dave Warner’s from the Suburbs with original Suburb Tony Durant and my long time guitarist collaborator Martin Cilia. Lloyd Gyi drums, Phil Bailey – who played on the This Is My Planet album – is on bass. We’ll be doing Suburbs classics; a few arcane ones for those from the early Suburbs days (These Parts) and perennials like Mugs Game and Convict Streak for a very Australian celebration of Australia Day.   The same line-up but with GREG MACAINSH (from Skyhooks) on bass will play CARAVAN CLUB MELB SUN MAR 8.

A more acoustic Warner will play THU MAR 12 at the Django Bar in Marrickville Sydney.  This version of the show will include readings from my various prose writings and some of my mammoth performance poems. It’s a little more laid back and will also delve into the vaults to bring out some little known early Warner tunes.

From Feb17-22 I will be performing in my little musical THE KING AND ME at the VELVELT LOUNGE MT LAWLEY PERTH  for Perth Fringe. I wrote the play and Martin Cilia and I wrote the songs.

How would you describe your sound in food form and why?
I guess in my best form I’d like to think it was original, Australian rock with a lot of energy and covering a wide range of styles from in your face satire to pub rock to melodic melancholia.

Which song resonates most strongly and why?
This varies from gig to gig depending on my mood but Suburban Boy, John Arlott Makes Me Chuckle and Half-Time At The Football are favourites. Suburban Boy because it was a statement of veracity that still strikes a chord with the audience, John Arlott because it’s a personal reflection on the dilemma of balancing the pursuit of success with contentment and normality, Half Time At The Football because it’s as close as I’ll get to being Thomas Pynchon to music.

Any on the road anecdotes?
Many from the past but I still get a chuckle from the time Premier Artists in Melbourne would not pay us for gigs we’d done, wanting us to wait till the cheques from venues cleared. The problem was we had to be in Sydney for a gig that night and needed money for petrol and a stroppy road crew. My solution was to get the roadies to immure Philip Jacobsen the accountant in his office by completely blocking the doorway with 45/60s [Note: huge PA speaker boxes]. There was no window, no toilet so Philip was entombed until we were paid.

Where do you draw inspiration from?
Half the time I don’t know, something just pops into my head – sometimes its personal; I’m angry or frustrated or sad (not one for happy as an inspiration usually because if you’re happy what the hell are you doing stuck in a room with a keyboard. Actually first time I’ve thought of that: keyboard songs will tend to be sad because you’re on your own, but guitars can be grabbed and played in a social situation or with a fellow writer, more chance for upbeat) I think the concepts that inspire my songs often spring from literature – I mentioned Thomas Pynchon, then also Flann O’Brien, Gunther Grasse, Robert Browning, Richard Brautigan – and musically from  everything I’ve ever heard, Doors, Kinks, stupid pop songs, King Crimson, Julie London.

What’s next for you?
I very much want to record a new album. I have a number of new songs and three or four older songs which I want to re-record with new arrangements.

What’s your scene?
I’m in with the Out-Crowd 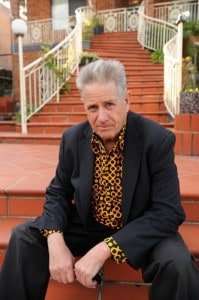 HAILING FROM PERTH in Western Australia, Dave Warner formed Australia’s first punk band PUS back in the early 1970s. By the time The Sex Pistols had formed, Warner had already moved on to a new phase of music and social commentary which he dubbed Suburban Rock. His band Dave Warner’s From The Suburbs was a major Australian pub band playing with the likes of Men At Work, Midnight Oil, INXS, Dragon and Skyhooks. His albums were highly original and successful, tapping into the psyche of the ordinary Aussie boy and girl. By the mid-80s, tired of touring Warner began writing in other forms. In 1997 his debut novel City of Light, a sweeping crime saga, won the Premier’s West Australian Literary Award. He continues to write novels and non-fiction books.

Dave has also written screenplays – two that have been made into films are Cut (1999), starring Molly Ringwald and Kylie Minogue, and Garage Days, co-written and directed by Alex Proyas. Warner still plays the occasional live show, sometimes with the full band, sometimes with a scaled down version, and often including live readings from his novels, plays and performance poetry.

Video Scene: We Wish You A Merry Christmas

Merry Christmas Everyone from What’s My Scene!  Here’s a video from our contributor, Martin Cilia from his Electric Christmas album.

Gig Scene: Mental As Anything – The Caravan Club, August 9th 2015

Winter in Melbourne can be chilly and bleak, and even the most upbeat of us can suffer from a bad case of S.A.D. unless we make a real effort to get out there and be […]

Comedy, surreal show girls, burlesque and theatre
MC KREWD
Our scene is this big gorgeous wide world we live in all its majestic splendour!
Kim Salmon, The Darling Downs
Leadfinger is a very strange band, hard to define, but we are free.
Stew, Leadfinger
The Astor Theatre on chapel st. Old cinema with copious amounts of atmosphere playing classic films (Chaplin, Gene Kelly, Kubrick, etc) and me with a honeycomb choc top spilt on my Tshirt because that’s just how I roll.
Jude Perl, Comedian
My scene is a Punk-hardcore scene or an underground, minimal electronic scene, something grungy – where everyone is wearing black. That’s my vibe; don’t go out until 11 when all the other vampires come out and go home when the sun comes up at 7. Oh shit. Creatures of the night.
Greg Puciato, Killer Be Killed & Dillinger Escape Plan
Country roots, old time, bluegrass, folk, Americana scene Traditional plus :)
Whitetop Mountaineers
We can be dirty, we can be imperfect, we can be classy, it doesn’t matter. We drift between scenes and eventually may just create our own.
The Ugly Kings
It’s Thonbury. It’s my dreaming. I’ve lived here 30 years and it’s evolved with me. The more I drink wine, the more wine bars appear in the neighbourhood. The more I eat, the more cafes appear in the neighbourhood. Fantastic.
Denise Scott, Comedian
Tunes, mates, and honesty. No dickhead policy!
Buddha In A Chocolate Box
Our gigs have an air of danger and sex. Beautiful women are free to express themselves and are as dangerous as hell. Everybody can have a good time ’cos there’s a lot of love in the room and we just can’t help but stomp out that primeval swamp boogie ooze.
Chris Russell’s Chicken Walk
It’s a delirium, really, but I like to live like this.
Hugo Race
It’s beards.
Nathaniel Beard, The Beards
I love being on a little boat near home in South West Victoria with a fishing line in the water, the Sun coming up or going down. I also love walking the streets of Melbourne or Manhattan or many of the beautiful towns and villages of Ireland or anywhere. My partner and my family are central to it all. I also love being in the midst of a great music session, anywhere, anytime, being transported into the soul of the Universe.
Shane Howard
Scones, savory, sweet I don’t mind
The Wooden Sky
All the wandering. The bastards and the angels. The sound of the rain and the pains of the heart. The silence. All the houses and all the rooms. All the keys and phones.
Raised By Eagles
No set scene. We have played with a variety of bands from King Parrot to The Datsuns. Offer us a show and give us a try!
Los Hombres Del Diablo
Yass KFC
Simon, Loon Lake
I have no idea what my scene is; I have been listening to Dubstep and a bit of Drum N Bass. I found a lot of Hip Hop and RnB stuff is getting very interesting again it is pushing different sounds out. I’ve been really into cycling since the early ‘90s; racing mountain bikes and racing road bikes. So between cycling and music there is not much time left, a bit of sleep now and again.
Mike Edwards, Jesus Jones
Staying home out of harms way.
Peter Milley, Cairo Club Orchestra
Melbourne. Nowhere else is as great as Melbourne.
Brat Farrar
Flanelette pyjama pants.
Timberwolf
I’m in with the Out-Crowd
Dave Warner
Anyone who welcomes a hairy, gold wearing, hot air blowing idiot to a dinner table is my scene.
Henry Wagons
Currently, I’m completely enveloped by writing my book; trying to complete the manuscript for my tome.
Jeff Duff
Fuck the Fucking Scene question! xo
Fuck The Fitzroy Doom Scene
Right now it’s a room with no lights on. An unmade bed. A laptop with 9% battery and a mosquito that just refuses to die.
Dave Larkin, Dallas Crane
Any scene with Al Swearangen & Mr. Wu from the show Deadwood ;)
Mathas
Sitting in the sun, in a nice chair, with a good book.
James Reyne
Deep 70s disco, wonky synths, shady lyrics, fairy lights and cheap wine.