Tell us about your new show?
Drizzle from the Sizzle is a comical hip hop cabaret about how I came to be MC KREWD.

How would you describe your sound in food form and why?
Sausages left out in the sun, topped with maple syrup and 100s and Thousands. It’s a dark show about ugly issues disguised in a sweet but grotesque shroud.

Which song resonates most strongly and why?
Ya’ll so Fake because it is a tongue and cheek song about coming into my own despite the expectation I should be ashamed of who I am and where she has come from. 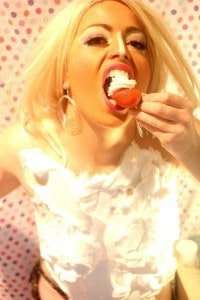 Any on the road anecdotes?
One time I went window washing to try and fund my hip hop career. I held up traffic, people were really mean and dishonest. You can watch the video in the link I’ve shared from YouTube.

Where do you draw inspiration from?
My experiences as a single mother on welfare, pop-culture, Antonin Artaud and everyone I’ve ever worked with.

What’s next for you?
Touring KREWD nights across Australia both with KREWD performers and performers local to the town we are visiting.

MC KREWD is a new Canberra based rapper, burlesque performer, storyteller and mother of eight. She is a by product of experimental theatre/event company, KREWD. KREWD has produced over 20 productions including A KREWD Chorale (You Are Here, 2015) and A KREWD Night (You Are Here, 2014) and is mother company to A KREWD Ensemble and comic duo The KREWD Sisters.

MC KREWD was co-producer and performer in sellout show Woodward’s Welcome you to Hell Inn and is about to have her Melbourne debut with her show Drizzle from the Sizzle in Melbourne at The Butterfly Club. Set on world domination she eagerly awaits to be signed up with Death Row Records.

Melbourne’s iconic venue curates a season of one-off encore MICF performances to support artists who were unfairly hindered by that one article in The Herald Sun. On April 16 2015, just in time for the closing weekend […]

Scene News: The Butterfly Club announces largest ever program as part of the 2015 Melbourne Fringe Festival

The Butterfly Club have a proud 16-year history of presenting independent cabaret, theatre, music, comedy and burlesque. For this year’s Melbourne Fringe Festival they have rolled out their most ambitious and exciting program to date. […]

Miss Everheart hosts a parade of parodies in vaudeville sensation. Miss Adelaide Everheart showcases a bevy of bold women, in a vaudevillian variety show that harks back to the stripped back, lewd and brassy days […]

Tegan Voltaire, The Voltaire Twins
I like to think that I belong to the head-strong Independent Music Scene – where we – musos and audience and everyone in between – all make gigs/tours, recordings, releases happen for ourselves and work our arses off to keep it going for the rest of our lives – all for the love of Music!
Florelie Escano
Bed. Pringles. Whisky. Attenborough doco. Wham.
Marlon Williams
Obviously to create music. My family. I love driving my Ferraris.
Yngwie Malmsteen
I think my style is more just making cameos in everyone else’s scene.
Mojo Juju
Act III, Scene VI of King Lear. A tense and gripping scene wherein the ageing king informs his three daughters that they have all been accepted as contestants on Family Feud.
Ben Pobjie, comedian
Currently its the Yarra River Trail I’m walking along. Generally my scene would be Melbourne. Nothing feels or compares to home.
Simon McConnell, The Delta Riggs
Yass KFC
Simon, Loon Lake
It’s Thonbury. It’s my dreaming. I’ve lived here 30 years and it’s evolved with me. The more I drink wine, the more wine bars appear in the neighbourhood. The more I eat, the more cafes appear in the neighbourhood. Fantastic.
Denise Scott, Comedian
Sitting in the sun, in a nice chair, with a good book.
James Reyne
Well I’m still looking for my scene, and I think I might have found it. Between the pages of What’s My Scene Magazine.
Dave Faulkner, Hoodoo Gurus
Book clubs, philosophy and extreme black metal
Elsen Price
The Astor Theatre on chapel st. Old cinema with copious amounts of atmosphere playing classic films (Chaplin, Gene Kelly, Kubrick, etc) and me with a honeycomb choc top spilt on my Tshirt because that’s just how I roll.
Jude Perl, Comedian