Formed in San Fernando in 1977, The Dickies were the first West Coast punk band to be signed to a major label. Surviving line-up changes and untimely deaths, The Dickies continue to play and record today with founding members Stan Lee and Leonard Graves Phillips. Lee recalls many moments from their career, from “Paul Weller’s advice when we first started: ‘get everything you can out of the record label’, to hanging out with The Stranglers and the Hell’s Angels in Amsterdam”. [pullquote]Though his proudest moment was when “Joey Ramone passed us the torch and said, ‘You’ve got to carry on now, we’re done’”.[/pullquote]

Lee feels honoured being touted as LA’s answer to The Ramones because “as for influences,” he states, “it wasn’t till I saw the Ramones and the Damned that I thought this is do-able. I had just started playing not much long before. It was actually Kevin DuBrow from Quiet Riot that talked me into playing guitar because he wanted to be a rockstar”. It was not much long after that The Dickies were touring with their idols. “It was great touring with The Jam, Ramones, Dead Kennedys, The Stranglers. If you’re a punk fan like I am, it was pretty great. I was in the front row every night watching The Jam. Paul Weller is such a great guitar player. And The Ramones every night, come on. My pride and joy is this picture on my wall of Joey singing and he’s wearing a Dickies’ shirt”. 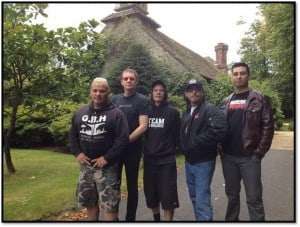 The Dickies’ music idealism and style came from the same place as their predecessors, yet lyrically they were miles apart. Lee states that they considered the moniker, “’Clown Princes of Punk Rock’ as amusing. We weren’t singing about Anarchy in the UK, no future or anything like that, that was a different place. We were going on waterslides, it was swimming pools and movie stars in LA. We had no angst against anything. We had a different spin on it”.

Though successful worldwide, including Australia, this will be the first time, in their 38 years of existence, that The Dickies will reach these shores. first time, Lee comments: “We haven’t forgotten Australia. It just never materialised. I said, ‘I’ll believe it when I see the airline tickets’. And this time, Metropolis Touring offered it and I guess it really must be happening cause you’re calling me so I guess there’s going to be airline tickets this time. We gonna fucken deliver as much as we can”. 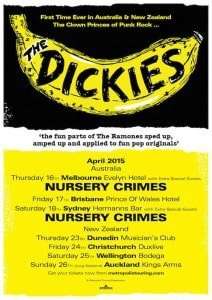 FUZZFEST returns bigger, louder and hairier than ever, and back at Cherry Bar this year with a kick ass lineup of Local and National touring acts from Australia, including our first International guest from Spain, […]

Dave Faulkner and Brad Shepherd, main men from the legendary Hoodoo Gurus performed a special show at the Caravan Club in Oakleigh, including the cream of the Gurus back catalogue. With Ron S Peno as […]

Tegan Voltaire, The Voltaire Twins
Going to the river on sunny afternoons with the blow up dingys and resting your beers on lily pads.
The Frowning Clouds
Yass KFC
Simon, Loon Lake
Flanelette pyjama pants.
Timberwolf
The beach. Tea with gin at your grandparents house. They have the best stories.
Betty & Oswald
Local bands at sticky carpet venues. Vinyl. Social networking. Keeping healthy in order to play full throttle live sets. Loud rehearsals. Good people with creative ideas. PRIMITIVE ROCK.
Jon S Williams of City of Cool
It’s Thonbury. It’s my dreaming. I’ve lived here 30 years and it’s evolved with me. The more I drink wine, the more wine bars appear in the neighbourhood. The more I eat, the more cafes appear in the neighbourhood. Fantastic.
Denise Scott, Comedian
Any scene with Al Swearangen & Mr. Wu from the show Deadwood ;)
Mathas
Melbourne. Nowhere else is as great as Melbourne.
Brat Farrar
Sitting in the sun, in a nice chair, with a good book.
James Reyne
I like the beach more than anything. The beach feels like home all year round. In terms of a scene…I actually prefer to hermit most of the time.
Abbe May
I love being on a little boat near home in South West Victoria with a fishing line in the water, the Sun coming up or going down. I also love walking the streets of Melbourne or Manhattan or many of the beautiful towns and villages of Ireland or anywhere. My partner and my family are central to it all. I also love being in the midst of a great music session, anywhere, anytime, being transported into the soul of the Universe.
Shane Howard
Obviously to create music. My family. I love driving my Ferraris.
Yngwie Malmsteen
We can be dirty, we can be imperfect, we can be classy, it doesn’t matter. We drift between scenes and eventually may just create our own.
The Ugly Kings
I have no idea what my scene is; I have been listening to Dubstep and a bit of Drum N Bass. I found a lot of Hip Hop and RnB stuff is getting very interesting again it is pushing different sounds out. I’ve been really into cycling since the early ‘90s; racing mountain bikes and racing road bikes. So between cycling and music there is not much time left, a bit of sleep now and again.
Mike Edwards, Jesus Jones
That’s a hard one, although I do love anything electronic with an indie-pop feel!
Franki
Aside from music and everything creative, I love open-mind people, unexpected humour, seeing the world and nature, riding my bicycle, playing billiards. I’m also a fan of coffee, whiskey and most things vintage.
Jessica Stuart Few
I will continue the continuum, singing my Songline.
Kutcha Edwards
Leadfinger is a very strange band, hard to define, but we are free.
Stew, Leadfinger
Hiking a 14K foot mountain in Colorado
Cole Washburn
Art is my scene. No labels, restrictions or judgement. I love art in all it’s varied glory.
The Last 5 Queers
“Malcolm Hill is a lifetime member of the Melbourne Music Mafia and part of the ratpack of post punk Melbourne artists who have been keepin’ it real across diverse art forms for thirty years.”
Malcolm Hill
Quirky cabaret bars that serve a mean G&T and boast a stellar cocktail list..which is why you’ll always find me returning to The Butterfly Club! I also love the buzz of a Fringe or Cabaret Festival, or a smart Opening Night. Any excuse for a dress up, really!
Amelia Ryan, Lady Liberty
Well I’m still looking for my scene, and I think I might have found it. Between the pages of What’s My Scene Magazine.
Dave Faulkner, Hoodoo Gurus
World/folk. Acoustic and proud of it!
Ilana Cravitz, The London Klezmer Quartet
Experimental electronica, musical metacreation, multiplicitous media, hacking.
Ollie Brown
When I’m not working in the studio or doing shows I’m at home with my partner and our baby so I guess they are my scene.
Way of the Eagle
Wherever there is music is where I feel most at home
Toby Robinson
Country roots, old time, bluegrass, folk, Americana scene Traditional plus :)
Whitetop Mountaineers