Tell us about your new single/ album/ tour?
My new show, Lady Liberty, is about the desperate quest to transcend from Queen of Calamity (a title I’ve been carrying around for a good portion of my life) to Lady of Liberty; it’s a quest that often departs from what is proper, prudent and polite. I take liberties. I swear liberally. I also have a go at the Liberal Leader! Ultimately, it speaks to the universal quest many of us have for self-betterment, and the various ways through which we obtain it…purpose, peace, pleasure, just to name a few.

How would you describe your sound in food form and why?
[pullquote]Leaving the headset microphone on when I left the stage to go to the bathroom was a real career highlight.[/pullquote]I haven’t been there, but I imagine my sound and style would be a bit like dining at a Heston Blumenthal restaurant. Quirky, unconventional and theatrical. It’s not always smooth and silky…I’m generally more concerned with story than sound.

Which song resonates most strongly and why?
I do a slowed down version of ‘I Wanna Dance With Somebody’ by Whitey Houston, and it’s close to the heart. In a show that’s otherwise filled with wordy parodies a quick whip’s, it’s a more sincere moment that reflects on the deep desire that many of us have for love.

Any on the road anecdotes?
More than I care to admit! Leaving the headset microphone on when I left the stage to go to the bathroom was a real career highlight. As was leaving my USA Visa to the last minute when I toured a show to NYC. I consequently had to delay my flight three times before finally getting my passport back. Lessons learned!

Where do you draw inspiration from?
Original artists who aren’t afraid to speak their mind, like Tim Minchin, Amanda Palmer and Eddie Perfect. And you can’t go past cabaret femme fatales such as Meow Meow, Ali McGregor and Lady Rizo…they’re sassy, sexy and smart but they’ve got a good set of lady-balls too.

What’s next for you?
I’m taking my original show, A Storm In A D Cup, over to The Edinburgh Fringe this year. It’s my UK debut, so I’m pretty excited! I will have spent a good portion of the year on the road by the time I return, so I dare say I’ll spend the last quarter of the year laying low, before touring Lady Liberty a little more extensively in 2016.

What’s your scene?
Quirky cabaret bars that serve a mean G&T and boast a stellar cocktail list..which is why you’ll always find me returning to The Butterfly Club! I also love the buzz of a Fringe or Cabaret Festival, or a smart Opening Night. Any excuse for a dress up, really! 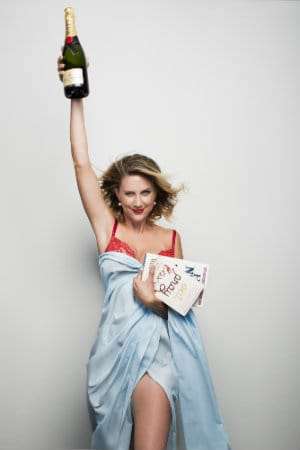 Having played to SOLD OUT houses throughout Australia and New York City with her hit show, A STORM IN A D – CUP, multi award ­ winning cabaret darling, Amelia Ryan, returns with LADY LIBERTY! In a brand new hour of entertainment, Ryan takes us on her personal quest to transcend from Queen of Calamity to Lady of Liberty; a quest that often departs from what is proper, prudent and polite! Ryan got all of her trials and tribulations off of her chest (pardon the pun) in A Storm In A D Cup. Now, like many, she’s trapped in her own personal purgatory; somewhere between the life she longs to lead (content, calm and perhaps even classy) and the life she’s left behind (a daily dalliance with disaster). This Girl…ahem, Lady…wants Liberty.

Through her signature blend of scintillating stories, clever parodies, and pop ­ musical mash ­ ups, Amelia asks; how does one even become a Lady of Liberty? From Bombo NSW to Broadway NYC, from meditation to Moet, and from monogamy to menage a trois, we’re about to find out!

Colouring the music of artists such as Queen, ACDC, Pharrell Williams and the Beach Boys with her own witty lyricism, Amelia shares her stellar stories through razor sharp humour and heart ­ warming honesty. She takes liberties, she swears liberally, and she may even have a dig at our Liberal Leader. But ultimately, she encourages us to let go, to let live, and be liberated.

Q&A Tell us about your new show? Drizzle from the Sizzle is a comical hip hop cabaret about how I came to be MC KREWD. How would you describe your sound in food form and […]

What’s My Scene has partnered with the Butterfly Club to present you with a new cocktail each week, based on shows from their 2016-2017 Summer program. Ingredients 30 goslings black rum 15 passoa (passionfruit liqueur) 20 lime […]

Tegan Voltaire, The Voltaire Twins
Fuck the Fucking Scene question! xo
Fuck The Fitzroy Doom Scene
It’s beards.
Nathaniel Beard, The Beards
It’s Thonbury. It’s my dreaming. I’ve lived here 30 years and it’s evolved with me. The more I drink wine, the more wine bars appear in the neighbourhood. The more I eat, the more cafes appear in the neighbourhood. Fantastic.
Denise Scott, Comedian
I think my style is more just making cameos in everyone else’s scene.
Mojo Juju
Yass KFC
Simon, Loon Lake
Currently its the Yarra River Trail I’m walking along. Generally my scene would be Melbourne. Nothing feels or compares to home.
Simon McConnell, The Delta Riggs
The TV show “Full House
World Wild
Local bands at sticky carpet venues. Vinyl. Social networking. Keeping healthy in order to play full throttle live sets. Loud rehearsals. Good people with creative ideas. PRIMITIVE ROCK.
Jon S Williams of City of Cool
I have no idea what my scene is; I have been listening to Dubstep and a bit of Drum N Bass. I found a lot of Hip Hop and RnB stuff is getting very interesting again it is pushing different sounds out. I’ve been really into cycling since the early ‘90s; racing mountain bikes and racing road bikes. So between cycling and music there is not much time left, a bit of sleep now and again.
Mike Edwards, Jesus Jones
Our gigs have an air of danger and sex. Beautiful women are free to express themselves and are as dangerous as hell. Everybody can have a good time ’cos there’s a lot of love in the room and we just can’t help but stomp out that primeval swamp boogie ooze.
Chris Russell’s Chicken Walk
Alice likes the Google. Sime likes taxidermy. It’s a pretty happening scene.
Sweet Jean
My family, my friends, my home.
Cory Putman, Norma Jean
I just do my best to live a life full of the things I love. Rock’n’roll, photography, New York City – they are three things right there that I love a lot!
Paul Miles
All the kids who weren’t cool at school and still aren’t. Those people who didn’t manage to become awesome artists and uber hip performers. The raggy dolls who never found a way to make their raggy doll-ness work for them.
Jonathon Duffy