Tell us about your new single/album/tour?
Ok the new single is called ‘Surfin’ – its about not being able to do the things you want to do all of the time. Most people can relate to that. If you can’t, then your life is perfect.

We are really stoked to be a playing a headline show again, it’s been a long time. We got the canons back from our tour buddies Barbarian too. Should be hot in there.

How would you describe your sound in food form and why?
A matriciana pasta from Patonys Pizza in South Melb – everyone eats it in the band and it taste good.

Which song resonates most strongly and why?
Probably Everything Is Awesome – Because Everything is Awesome.

Any on the road anecdotes?
If you are not happy with your subway roll, always ask for your money back.

What’s next for you?
Practicing my scales.

Sam (singer) is off to the world championship latin drumming competition.
Ricky (drummer) – is off to America to learn how to get better at singing in an American accent.
Timmy (bass) – is getting the section of stage between him and Sam extended so he has more room to stand still.
Nick (lead guitar) – is off to get a key ring. 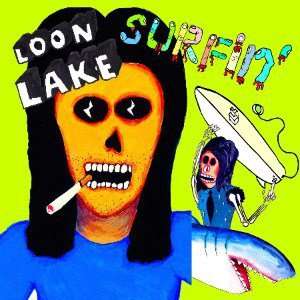 Today LOON LAKE have shared the video clip for their new single ‘Surfin‘ via FasterLouder.

Like the track, the ‘Surfin‘ video is fun and fast. Loon Lake‘s frontman Sam Nolan explains, “We wanted something DIY, that captured the essence of the song lyrically. We all grew up surfing and skating and like anyone really love to party – and we feel that the song and video as a package capture who we are as a band. Over three days we got a load of friends to get involved with helping us shoot segments for the clip,  Surfin’, Skating, Drinking, playing bass – it was actually a whole bunch of fun. We pretty much enjoyed ourselves for three days and filmed it all.”

“We shot a majority of it just on a GoPro ourselves. We borrowed a mates old VK Commodore wagon and hammered around town collecting footage, we threw a party, put on a some beers, and played a gig to a whole bunch of friends who have been there for us from the start – no touch ups, no re-edits, straight-up good times.”

After garnering accolades and praise for their releases and relentless touring, the band are going back to where it all started – a bunch of mates hanging out, jamming music they love and not over-thinking things.

Reflecting their current stripped down approach, Loon Lake have made upcoming shows as intimate as possible, with limited tickets still available. They play in Melbourne at Shebeen on Thursday 26 March, and in Sydney at the Brighton Up Bar on Friday 27 March, on sale now from loonlake.com.au

The Venue Collective is an independent venue programming entity that looks after the bookings for venues in Melbourne, Sydney and Brisbane – the Corner Hotel, Northcote SC, Newtown SC, Shebeen, 170 Russell and Woolly Mammoth. […]

If you’re a Max Chillington then you’re our scene.
Gunslingers
Well these days my scene tends to revolve around my computer and being nudged by my dog to take her out for a walk. And then having my wife shout at me for spending time on my computer. I’m loving it actually. I’m quite relishing that scene. I miss them both very much.
Peter Hook, Joy Division/New Order/The Light
Hot, hot lovers
Luke Monks, Gay Paris
Experimental electronica, musical metacreation, multiplicitous media, hacking.
Ollie Brown
Currently, I’m completely enveloped by writing my book; trying to complete the manuscript for my tome.
Jeff Duff
My scene is at the moment Big Wongs General Tsos Chicken as I get sauce on the keys typing to you :-)
Brian Mackey
What’s my scene? well…
And another thing I’ve been wondering lately
Oh, baby,
Tell me where have you been?
Now the stage is set
Where’s my Juliet, baby?
Is it maybe
My Midsummer Night’s Dream?
What’s my scene?
Clowns
Well I’m still looking for my scene, and I think I might have found it. Between the pages of What’s My Scene Magazine.
Dave Faulkner, Hoodoo Gurus
The dog park’s pretty good. I have a couple of miniature pinchers. And they’re the loves of my life. I take them for walks to the dog park; I’ve got a Harley Davidson I ride around. It’s not too exciting. It used to be sex, drugs and rock n roll; now I walk my dogs.
Stan Lee, The Dickies
My bedroom
Nantes
It’s Thonbury. It’s my dreaming. I’ve lived here 30 years and it’s evolved with me. The more I drink wine, the more wine bars appear in the neighbourhood. The more I eat, the more cafes appear in the neighbourhood. Fantastic.
Denise Scott, Comedian
Alice likes the Google. Sime likes taxidermy. It’s a pretty happening scene.
Sweet Jean
I’m in with the Out-Crowd
Dave Warner
That’s a hard one, although I do love anything electronic with an indie-pop feel!
Franki
I have no idea what my scene is; I have been listening to Dubstep and a bit of Drum N Bass. I found a lot of Hip Hop and RnB stuff is getting very interesting again it is pushing different sounds out. I’ve been really into cycling since the early ‘90s; racing mountain bikes and racing road bikes. So between cycling and music there is not much time left, a bit of sleep now and again.
Mike Edwards, Jesus Jones
I think my style is more just making cameos in everyone else’s scene.
Mojo Juju
Comedy, surreal show girls, burlesque and theatre
MC KREWD
The car wash scene from Cool Hand Luke will do just fine thank you.
Old Gray Mule
My scene is driving fast cars and shooting guns.
Ace Frehley
Book clubs, philosophy and extreme black metal
Elsen Price
I just do my best to live a life full of the things I love. Rock’n’roll, photography, New York City – they are three things right there that I love a lot!
Paul Miles
Bed. Pringles. Whisky. Attenborough doco. Wham.
Marlon Williams
Anyone who welcomes a hairy, gold wearing, hot air blowing idiot to a dinner table is my scene.
Henry Wagons
Act III, Scene VI of King Lear. A tense and gripping scene wherein the ageing king informs his three daughters that they have all been accepted as contestants on Family Feud.
Ben Pobjie, comedian
My family, my friends, my home.
Cory Putman, Norma Jean
Quirky cabaret bars that serve a mean G&T and boast a stellar cocktail list..which is why you’ll always find me returning to The Butterfly Club! I also love the buzz of a Fringe or Cabaret Festival, or a smart Opening Night. Any excuse for a dress up, really!
Amelia Ryan, Lady Liberty
Local bands at sticky carpet venues. Vinyl. Social networking. Keeping healthy in order to play full throttle live sets. Loud rehearsals. Good people with creative ideas. PRIMITIVE ROCK.
Jon S Williams of City of Cool
We can be dirty, we can be imperfect, we can be classy, it doesn’t matter. We drift between scenes and eventually may just create our own.
The Ugly Kings
My scene is a Punk-hardcore scene or an underground, minimal electronic scene, something grungy – where everyone is wearing black. That’s my vibe; don’t go out until 11 when all the other vampires come out and go home when the sun comes up at 7. Oh shit. Creatures of the night.
Greg Puciato, Killer Be Killed & Dillinger Escape Plan
Deep 70s disco, wonky synths, shady lyrics, fairy lights and cheap wine.