Tell us about your new single/ album/ tour?
We’re releasing two new songs called I See Stars and Still Here on 7” vinyl over two special shows with our band in late February. We’re stoked to be a part of the Between the Bays Festival on the Mornington Peninsula on Saturday Feb 28, and on Sunday Feb 22 we’re playing as part of the Gasometer Hotel’s Collingwood Open series. They actually open the roof!

How would you describe your sound in food form and why?
Anything that’s not vegan, gluten-free, or decaffeinated.

Which song resonates most strongly and why?
Perfect Day by Lou Reed is a perfect song. It balances that mix of “happy and sad” that we’re often shooting for in the studio.

Where do you draw inspiration from?
We’re influenced by hazy, old-school pop, stark, gothic folk and some of the more languid seventies guitar music. We both came to the band with a love for harmony singing, so that comes through in the songs as well.

What’s next for you?
After these two shows with our band to launch our 7” vinyl single, we’re heading off to Canada and the States. We’ll also be working on more songs for our new album. 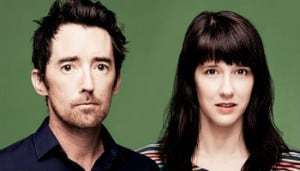 SWEET JEAN is a duo from Melbourne who make smartly-crafted Americana-influenced Australian pop that ranges from stark and gothic, to hazy and melodic. Since forming in late 2010, Sweet Jean has built a reputation for evocative songwriting, razor-sharp harmonies, and stirring live performances.

The duo has a natural ability to transport their audience to the heart of their songs.” Sweet Jean’s debut album Dear Departure was released in July 2013 to glowing reviews, receiving 5/5 stars in UK’s R2 Magazine, 9/10 from Americana UK; Album of the Week on ABC Radio Nati onal, ABC DIG Music (Double J), ABC Local Radio, and PBS Radio; Album of the Month in Rhythms Magazine; iTunes Single of the Week for Shiver & Shake; and a nomination for Best Country Album from The Age Music Victoria Awards

With a healthy following across the breadth of their home continent, San Franciscan five-piece The Brothers Comatose are set to win more hearts, with their maiden voyage to East coast Australia this Spring. Performing their […]

Magpie Johnston: Director – Dashville When did you first start in this role? 2004 I guess.. when I kicked off my first outdoor festival at home (The Gum Ball). Tell us an unusual anecdote whilst […]

Right now it’s a room with no lights on. An unmade bed. A laptop with 9% battery and a mosquito that just refuses to die.
Dave Larkin, Dallas Crane
Going to the river on sunny afternoons with the blow up dingys and resting your beers on lily pads.
The Frowning Clouds
World/folk. Acoustic and proud of it!
Ilana Cravitz, The London Klezmer Quartet

Cool small bars with good food, good wine, good company
The Backsliders
Well these days my scene tends to revolve around my computer and being nudged by my dog to take her out for a walk. And then having my wife shout at me for spending time on my computer. I’m loving it actually. I’m quite relishing that scene. I miss them both very much.
Peter Hook, Joy Division/New Order/The Light

I’m in with the Out-Crowd
Dave Warner
Art is my scene. No labels, restrictions or judgement. I love art in all it’s varied glory.
The Last 5 Queers

Tunes, mates, and honesty. No dickhead policy!
Buddha In A Chocolate Box
Act III, Scene VI of King Lear. A tense and gripping scene wherein the ageing king informs his three daughters that they have all been accepted as contestants on Family Feud.
Ben Pobjie, comedian
Yass KFC
Simon, Loon Lake

Currently its the Yarra River Trail I’m walking along. Generally my scene would be Melbourne. Nothing feels or compares to home.
Simon McConnell, The Delta Riggs
My bedroom
Nantes

When I’m not working in the studio or doing shows I’m at home with my partner and our baby so I guess they are my scene.
Way of the Eagle
Any scene with Al Swearangen & Mr. Wu from the show Deadwood ;)
Mathas