Tell us about your new album?
It’s called Djangus and it’s named after our guitarist Angus. I’m not sure why to be honest. It has his face on the album cover too, which we took from his learners permit photo. He has this ridiculous afro and we think it’s hilarious. We recorded most of the music live on a freezing Saturday afternoon/night. I remember it being freezing in the studio cos my fingers were really cold and it was hard to play guitar properly. We then overdubbed other stuff, like vocals and Casio keyboard and extra fuzz. The album almost reads to me like a diary of my life between 2013-2014. The lyrics all come from personal experiences.

How would you describe your sound in food form and why?
Probably rainbow flavoured ice cream with wizz fizz sprinkled on top. Cos I guess you could call the tracks sweet and colourful. And sherbey. That’s a new adjective for “with essence of sherbet.” And our songs definitely have an abundance of sherbey wizz fizzy essence. Everybody thinks so.

Which song resonates most strongly and why?
[pullquote]The album almost reads to me like a diary of my life between 2013-2014. The lyrics all come from personal experiences.[/pullquote]I’d say Interstellar, just cos I reckon it sounds as fun as it was creating the song. Jackson found this shitty old Casio keyboard in a pile of trash which turned out to be working perfectly fine, so We ran it into a bunch of guitar pedals and recorded it into the song. It added this whole extra layer to the track which I dig heaps.

Any on the road anecdotes?
We did a show at Revolver for Angus’s birthday and between just about every song people in the audience were handing him drinks of all kinds. At one point it was a triple shot of tequila or something. Anyway he got kicked out of Revs after the show and ended up on Chapel St passed out in a pool of his own vomit. Disgusting.

Where do you draw inspiration from?
A lot of the lyrics are kind of snapshots of how I was feeling at a certain time. Sometimes I’m in a kind of emotional predicament and need to figure out how I feel about something and getting the thoughts out onto a page really helps a bunch. When the feelings are real the lyrics tend to come out a lot more naturally for me. Musically we draw inspiration anywhere from 60s pop to 90s California punk to garage psych kinda stuff.

What’s next for you?
To play a bunch of kickass shows to intoxicated audiences! We’re also sitting on a bunch of new material which we’re keen to get onto tape asap.

What’s your scene?
If you’re a Max Chillington then you’re our scene. 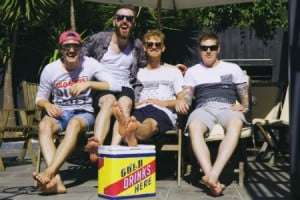 After a year spent performing at rowdy live shows and writing a bunch of killer new tunes, Melbourne four-piece Gunslingers are back with their blistering debut LP, DJANGUS.

Like California punks Wavves and Weezer before them, Gunslingers specialise in giving 60s bubblegum melodies the rock’n’roll treatment, adding explosive choruses and layer upon layer of fuzz. The band has refined its sound since releasing previous EPs My First Trip to Mexico and Radiation in the Sky, which were brimming with rambunctious Spaghetti Western jams and dark Americana. DJANGUS still contains a hint of the Wild West, but Gunslingers have moved on from their psychobilly origins towards punchy surf rock melodies and pop punk charm.

As a group of energetic young shredders, Gunslingers’ plaintive honesty will take some people by surprise. “I’ve got love in my veins and I want you to know it,” vocalist Tom Lutrov cries out halfway through the record. His lines are direct and from the heart, like most tracks on DJANGUS. Beneath the fun and the squall, the album is brimming with urgent love songs – from the Ramones-style pop of ‘Black Hole Eyes’ to ‘Megatsunami’s cascading drum rolls and crashing guitars.

Recorded by King Gizzard and the Lizard Wizard producer Paul Maybury and mastered by whizz kid Andrei Eremin, DJANGUS has already received enthusiastic support from the likes of Rolling Stone, Tone Deaf and Melbourne’s RRR, which featured the Gunslingers on its Class of 2014 mix-tape. Singles ‘Paradox’, ‘I’ll Always Be Waiting’ and ‘Interstellar’ have had some serious spins on Triple J Unearthed, as well as praise from Home & Hosed honcho Dom Alessio.

DJANGUS is now available on iTunes and Bandcamp. The band will launch the new album on their upcoming East Coast tour, with dates to be announced soon.

Broken River is releasing a new single “Me Versus You” and is playing a headline show at The Tote in Melbourne on Thursday, 17th August with support from The In The Out and Teenage Dads. Broken […]

Anywhere there is good company, great conversation, and a glass of red.
Helen Perris
World/folk. Acoustic and proud of it!
Ilana Cravitz, The London Klezmer Quartet
Comedy, surreal show girls, burlesque and theatre
MC KREWD
The car wash scene from Cool Hand Luke will do just fine thank you.
Old Gray Mule
I like to think that I belong to the head-strong Independent Music Scene – where we – musos and audience and everyone in between – all make gigs/tours, recordings, releases happen for ourselves and work our arses off to keep it going for the rest of our lives – all for the love of Music!
Florelie Escano
I have no idea what my scene is; I have been listening to Dubstep and a bit of Drum N Bass. I found a lot of Hip Hop and RnB stuff is getting very interesting again it is pushing different sounds out. I’ve been really into cycling since the early ‘90s; racing mountain bikes and racing road bikes. So between cycling and music there is not much time left, a bit of sleep now and again.
Mike Edwards, Jesus Jones
I like to be out in the nature, to get away. Go to the woods. My dad lives in the woods. Maybe once or twice a year I don’t have phone reception there is no Wi-Fi
Fredrik Åkesson, Opeth
Deep 70s disco, wonky synths, shady lyrics, fairy lights and cheap wine.