Tell us about your new single/ album/ tour ?
We just finished our 3rd album. Vocal booths are hot and airless so most of the album was sung and played sans pants in a sweaty and frankly, aromatic environment. The previous albums were pretty planned and rehearsed and this one couldn’t have been more different. I was writing lyrics on the floor between takes and my favourite song was recorded on the first take. Dave ( Folley – drums) hadn’t heard it before we got that first and only take.

How would you describe your sound in food form and why?
Hmmm, it would be a soul food banquet. We know how to pack some spice and flavour into those cheaper cuts and it’s all you can eat.

Which song resonates most strongly and why?
All time it would be Bad Motherfucker. At the moment it’s a new one called Black Water. It’s about Hurricane Katrina in New Orleans some years back. I remember watching it unfold on tv and being affected by how one of the first world’s most storied and culturally rich cities could be brought to it’s knees by super natural weather, governmental neglect abuse, and a broken, uncaring government.  I went to New Orleans for the first time a few years after that and was blown away by the locals warmth and fatalistic lust for life.

Any on the road anecdotes?
Discretion is the better part of valour so modesty prevents the most debauched aspects of our traveling life being disclosed . I will say however that it’s pretty funny watching a man of Dave Folley’s physical magnitude squeezing into economy airline seating and smaller rental cars.

Where do you draw inspiration from?
Typically life in Mississippi and Louisiana really make me want to write. The things I’ve experienced, the people I’ve met etc. The feeling of freedom as you barrel down an interstate on the wrong side of the road at night. Music is cathartic and I usually have a good purge as well. At the moment I’m watching a hell of a lot of Film Noir. I love the imagery and symbolism. I dig how every character in those films is a flawed one, even those that are put up on a pedestal,….. much like life.

What’s next for you?
Well we’ve got the Ballarat Beer Fest on the 24th of Jan. and a few gigs here and there but mostly, we’ll be working on the production, artwork etc. for the new record……. and of course, writing songs.

What’s your scene?
Our gigs have an air of danger and sex. Beautiful women are free to express themselves and are as dangerous as hell. Everybody can have a good time ‘cos there’s a lot of love in the room and we just can’t help but stomp out that primeval swamp boogie ooze. 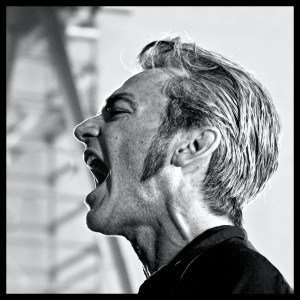 Cementing their reputation as the hardest working blues combo in the coun- try, 2013 has already seen Chicken Walk receive the famed golden boot at Golden Plains, tour the nation twice with Tony Joe White and Clairy Browne & the Bangin’ Rackettes, as well as share stages with everyone from Jimmy Cliff to Santana to Gary Clark Jr.

Somehow amongst all of this, the irrepressible combo found time to write and record album number two. Whereas the first album was famously built on the foundation of a mere handful of shows, Shakedown sees a road-matured Chicken Walk displaying a newfound focus and heartworn confidence, propelled by the extramural themes of shining sun, pouring rain, rivers, roads and trains.

Effortlessly charged, Shakedown finds Chicken Walk delivering a richer, fuller sound and more exploratory songwriting. The hard-luck baladeering of ‘Someday My Sun Gonna Shine’ provides a tender counterpoint to the driving, elemental crowd favourites ‘(Somebody Call The) Po’Po’’ and ‘Bad Motherfucker’, whilst still displaying all the charm and wit synonymous with a Chicken Walk live show.

Each song was recorded in only two takes; all live, honest and shimmering with the personality of the players. Chris’ swagger and (recently departed drummer) Dean’s sense of style delivering the one-two punch as natural and unforced as the land around them. Or in Chris’ words ‘real, living music’.

See them at the Ballarat Beer Festival. With thousands expected to descend upon Ballarat township on Saturday 24th January 2015, music lovers and beer enthusiasts are encouraged to book early for the event. Tickets (and drink tokens) available now via Ticketek www.ticketek.com.au or 132 849, or Ticketek outlets now.

Tell us about your new single/ album/ tour? The new album is Zia and this is my debut album, so without a doubt, this is a turning point in my life. The music comes from […]

The Dirty Earth Release ‘Ascendancy’ [pullquote]The Dirty Earth: “like the love child of Suzi Quatro and Sweet, who’s been babysat by Rose Tattoo”[/pullquote] There is nothing so fine as a righteous blast of rock and roll […]

Tell us about your new single/ album/ tour? The new album is titled, Honest Man. Right now, I’m just staring off a 62 show tour that will be taking me all over North American with my […]

Tegan Voltaire, The Voltaire Twins
We can be dirty, we can be imperfect, we can be classy, it doesn’t matter. We drift between scenes and eventually may just create our own.
The Ugly Kings
Cool small bars with good food, good wine, good company
The Backsliders
Well I’m still looking for my scene, and I think I might have found it. Between the pages of What’s My Scene Magazine.
Dave Faulkner, Hoodoo Gurus
It’s Thonbury. It’s my dreaming. I’ve lived here 30 years and it’s evolved with me. The more I drink wine, the more wine bars appear in the neighbourhood. The more I eat, the more cafes appear in the neighbourhood. Fantastic.
Denise Scott, Comedian
Cool venues with good beer on tap that don’t mind us getting loud and getting room grooving so hard you feel the floor shaking.
Papa G and The Starcats
Obviously to create music. My family. I love driving my Ferraris.
Yngwie Malmsteen
Hot, hot lovers
Luke Monks, Gay Paris
My bedroom
Nantes
If you’re a Max Chillington then you’re our scene.
Gunslingers
I will continue the continuum, singing my Songline.
Kutcha Edwards
Scones, savory, sweet I don’t mind
The Wooden Sky
The beach. Tea with gin at your grandparents house. They have the best stories.
Betty & Oswald
Book clubs, philosophy and extreme black metal
Elsen Price
Hiking a 14K foot mountain in Colorado
Cole Washburn
Flanelette pyjama pants.
Timberwolf
Fuck the Fucking Scene question! xo
Fuck The Fitzroy Doom Scene
Leadfinger is a very strange band, hard to define, but we are free.
Stew, Leadfinger
Currently, I’m completely enveloped by writing my book; trying to complete the manuscript for my tome.
Jeff Duff
My scene is at the moment Big Wongs General Tsos Chicken as I get sauce on the keys typing to you :-)
Brian Mackey
Any scene with Al Swearangen & Mr. Wu from the show Deadwood ;)
Mathas
Rock’n’Roll
About Heels on Decks
The car wash scene from Cool Hand Luke will do just fine thank you.
Old Gray Mule
Our gigs have an air of danger and sex. Beautiful women are free to express themselves and are as dangerous as hell. Everybody can have a good time ’cos there’s a lot of love in the room and we just can’t help but stomp out that primeval swamp boogie ooze.
Chris Russell’s Chicken Walk
I am a simple man. My scene is simple. I like playing metal and spending time with my family.
Waclaw ”Vogg” Kieltyka, Decapitated
My scene is finding any excuse to dance with my 2 year old daughter Ruby.
Matthew Hardy, Comedian
Our scene is folk that are interested in change. Not just music, but breaking the norm, the boundaries and stereotype of Australian ’rock/pop’ music. Unpredictable, the question marks, the new jokers in town. Don’t Believe The Haze.
Slumberhaze
The dog park’s pretty good. I have a couple of miniature pinchers. And they’re the loves of my life. I take them for walks to the dog park; I’ve got a Harley Davidson I ride around. It’s not too exciting. It used to be sex, drugs and rock n roll; now I walk my dogs.
Stan Lee, The Dickies
I don’t wish to belong to any scene that would have me as a member (with thanks to Groucho Marx).
Bob Spencer, Raw Brit
My scene is a Punk-hardcore scene or an underground, minimal electronic scene, something grungy – where everyone is wearing black. That’s my vibe; don’t go out until 11 when all the other vampires come out and go home when the sun comes up at 7. Oh shit. Creatures of the night.
Greg Puciato, Killer Be Killed & Dillinger Escape Plan
Sitting in the sun, in a nice chair, with a good book.
James Reyne
I like to be out in the nature, to get away. Go to the woods. My dad lives in the woods. Maybe once or twice a year I don’t have phone reception there is no Wi-Fi
Fredrik Åkesson, Opeth
Yass KFC
Simon, Loon Lake
Tunes, mates, and honesty. No dickhead policy!
Buddha In A Chocolate Box