Who is in your band?
City of Cool is Jon S Williams: Vocals/Guitar and David Craven: Drums

Tell us about your new album?

In March 2008, whilst living in Barcelona, Jon saw NYC Hardcore band ‘Girls Against Boys’ in a small club. The idea for City of Cool was born. When Jon returned to Melbourne he called David and City of Cool began September 2008. Delays were experienced while David lived in London 2011/12 and Auckland 2014. This debut album is a result of all the writing and playing that went on in these years. A particularly coherent and focused body of work has resulted.

How would you describe your sound in food form and why?
City of Cool is a home cooked meal or a slow cooked meal at a local restaurant where City of Cool walked or rode a bike. All ingredients are sourced from local markets and/or grown in the backyard garden. “The globalisation of agricultural systems over recent decades is likely to have been one of the most important causes of overall increases in greenhouse gas emissions” (Steven Shrybman) City of Cool inherently rejects the dominant paradigm of globalised mass consumerism and fast food.

Which song resonates most strongly and why?
All songs on this debut album relate to one another, that is why it is an album. However, the lead track ‘CCTV’ is 20 seconds long and resulted from a rehearsal jam just after David returned from London, so that song has a particular resonance.

What’s next for you?
Tuesday 2 June: Interview with Ken Eavel (Go for Broke) on 3PBS 106.7fm
Saturday 27 June: Live-to-air performance with Mike Smith (Let your freak flag fly) on 3CR 855AM
Saturday 11 July: Album launch @ The Tote (Plastic Knife #14 Zine launch) with The Church of Hysteria and The Girl Fridas

About City of Cool 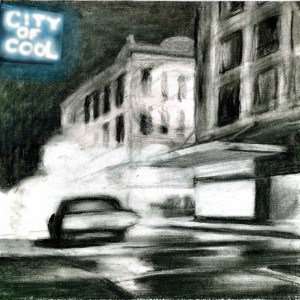 What’s My Scene caught up with Jon S Williams of City of Cool, an internationally unknown primitive rock band based in Melbourne.

City of Cool is:

As a mainstay of the live L.A scene and featured on the Decline of Western Civilisation 2 – The Metal Years, the band was more in line with the rawness of Guns ‘N’ Roses and Motley Crue rather than the polished pop finish of Poison and Warrant. […]

Scene News: The Sand Dollars Release long awaited EP ‘I Like The Look Of Your Sweater, Can I Have Your Number?’

The long awaited EP from Melbourne’s The Sand Dollars is finally here and they’ve left the best song till last with the chill out, RnB-groover, ‘LOVE DUST’ as the lead single. ‘I LIKE THE LOOK […]

Leadfinger is a very strange band, hard to define, but we are free.
Stew, Leadfinger
Hot, hot lovers
Luke Monks, Gay Paris
Art is my scene. No labels, restrictions or judgement. I love art in all it’s varied glory.
The Last 5 Queers
Rock’n’Roll
About Heels on Decks
Staying home out of harms way.
Peter Milley, Cairo Club Orchestra
Scones, savory, sweet I don’t mind
The Wooden Sky
Yass KFC
Simon, Loon Lake
The beach. Tea with gin at your grandparents house. They have the best stories.
Betty & Oswald
Comedy, surreal show girls, burlesque and theatre
MC KREWD
I like to think that I belong to the head-strong Independent Music Scene – where we – musos and audience and everyone in between – all make gigs/tours, recordings, releases happen for ourselves and work our arses off to keep it going for the rest of our lives – all for the love of Music!
Florelie Escano
Our scene is this big gorgeous wide world we live in all its majestic splendour!
Kim Salmon, The Darling Downs
Hiking a 14K foot mountain in Colorado
Cole Washburn
Bed. Pringles. Whisky. Attenborough doco. Wham.
Marlon Williams
Well I’m still looking for my scene, and I think I might have found it. Between the pages of What’s My Scene Magazine.
Dave Faulkner, Hoodoo Gurus
Ep. 1 Series 3 of BBC’s ’Sherlock’ where Sherlock bungee jumps through a window and kisses Molly Hooper.
Miss Adelaide Everheart from Early Burley Burlesque
It’s Thonbury. It’s my dreaming. I’ve lived here 30 years and it’s evolved with me. The more I drink wine, the more wine bars appear in the neighbourhood. The more I eat, the more cafes appear in the neighbourhood. Fantastic.
Denise Scott, Comedian
Country roots, old time, bluegrass, folk, Americana scene Traditional plus :)
Whitetop Mountaineers
Anyone who welcomes a hairy, gold wearing, hot air blowing idiot to a dinner table is my scene.
Henry Wagons
Beer, riffs, good people, good food and new adventures, anywhere those things exist, that’s my scene!
Andy, Don Fernando
I don’t wish to belong to any scene that would have me as a member (with thanks to Groucho Marx).
Bob Spencer, Raw Brit
Quirky cabaret bars that serve a mean G&T and boast a stellar cocktail list..which is why you’ll always find me returning to The Butterfly Club! I also love the buzz of a Fringe or Cabaret Festival, or a smart Opening Night. Any excuse for a dress up, really!
Amelia Ryan, Lady Liberty
“Malcolm Hill is a lifetime member of the Melbourne Music Mafia and part of the ratpack of post punk Melbourne artists who have been keepin’ it real across diverse art forms for thirty years.”
Malcolm Hill
My scene is at the moment Big Wongs General Tsos Chicken as I get sauce on the keys typing to you :-)
Brian Mackey
Sitting in the sun, in a nice chair, with a good book.
James Reyne
My scene is finding any excuse to dance with my 2 year old daughter Ruby.
Matthew Hardy, Comedian
That’s a hard one, although I do love anything electronic with an indie-pop feel!
Franki
I just do my best to live a life full of the things I love. Rock’n’roll, photography, New York City – they are three things right there that I love a lot!
Paul Miles
I am a simple man. My scene is simple. I like playing metal and spending time with my family.
Waclaw ”Vogg” Kieltyka, Decapitated
Any scene with Al Swearangen & Mr. Wu from the show Deadwood ;)
Mathas
Currently, I’m completely enveloped by writing my book; trying to complete the manuscript for my tome.
Jeff Duff
Our gigs have an air of danger and sex. Beautiful women are free to express themselves and are as dangerous as hell. Everybody can have a good time ’cos there’s a lot of love in the room and we just can’t help but stomp out that primeval swamp boogie ooze.
Chris Russell’s Chicken Walk
Melbourne. Nowhere else is as great as Melbourne.
Brat Farrar
The Astor Theatre on chapel st. Old cinema with copious amounts of atmosphere playing classic films (Chaplin, Gene Kelly, Kubrick, etc) and me with a honeycomb choc top spilt on my Tshirt because that’s just how I roll.
Jude Perl, Comedian
I have no idea what my scene is; I have been listening to Dubstep and a bit of Drum N Bass. I found a lot of Hip Hop and RnB stuff is getting very interesting again it is pushing different sounds out. I’ve been really into cycling since the early ‘90s; racing mountain bikes and racing road bikes. So between cycling and music there is not much time left, a bit of sleep now and again.
Mike Edwards, Jesus Jones
Going to the river on sunny afternoons with the blow up dingys and resting your beers on lily pads.
The Frowning Clouds
Fuck the Fucking Scene question! xo
Fuck The Fitzroy Doom Scene
My scene is driving fast cars and shooting guns.
Ace Frehley
My bedroom
Nantes
Our scene is in the city of Bath, a small city with a very big musical identity, we play the British festivals and I am also in the ’choirs scene’. We are also in other bands for fun, music all the way, roll on summer!
Su Hart, Baka Beyond
Deep 70s disco, wonky synths, shady lyrics, fairy lights and cheap wine.