Yngwie Malmsteen is heading back to our shores in May. He first arrived in 1990 – “it should have been earlier than that, then 1992, 2006 and a 2013 clinic tour.” He’s bringing a full band, same lineup as on his new live album, but with a different drummer. He tells me, “I don’t have a band per se, when it’s time to go out I pick the best guys that are available. It’s a little different, it’s like Bach, which ones are the best of the day, you know.”

I asked him about his guitars, he’s known to have quite a collection and used to favour an early 70s strat. 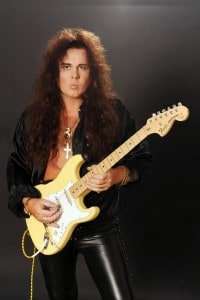 “Up until 2006, when I was in Australia, for the first time I started using my signature model exclusively. Since then I’ve been using that. It’s extremely good. Fender Stratocaster being the Malmsteen signature model. I designed the pickups and the scalloped neck, etc. It is an absolutely stunning guitar. They got everything right on it, you know”.

“Before then I would use only really old guitars – 70s and 60s and 50s. And I used to smash them up a lot, you know. I have literally hundreds of them. Literally hundreds… I made the mistake many years ago to get too attached to one. And once I got too attached to one then that’s really bad because they get stolen, or they break, so I was kind like, ok, give me a bunch of guitars that look like this and I just take them.”

So what can we expect from this tour? “Expect the unexpected.”

“It will be a good mixture of old and new stuff. Similar to the live album. What I do is, even when I have a set list, I decide last thing the night before. The band and the tour manager will come into my room and I say ok, this is the set list. I put it on the stage and I go out and play something different anyway. It’s never the same.”

When your band’s that good they can follow you… “Yeah, exactly.”

So if Malmsteens music was a food, what would it be? “Oh my God. That’s a really interesting question.

Hmmm…. it wouldn’t be simple food, but it would be very good food, expensive. Probably spicy. I really don’t know. Indian food, maybe.”

I ask about a song of his that he likes the most? “Well, the one I’m writing next. Seriously they’re all like my children and I can’t tell you different. But there are some songs that tend to hang around for a longer period of time, and stuff like that. Every time I write a song it’s a total like a labour of love, I give everything I can to that one. Right now I’m in the studio recording a new album and I’m very very involved with writing at the moment. So to me everything is that now.”

Malmsteen’s had some interesting experiences in Australia. “One time, it was 2006 I think, I was approached by the family of Steve Irwin – he had just passed. I think he was great. His family came and I signed some stuff for them to auction off. So that was really interesting.”

Did he go to the theme park and meet the crocodiles? “I didn’t have time for that, but I met his family and they came to the show.”

While Malmsteen is busy completing his new album, he’s still heading out on the road. “I’m actually going to South America next week, then Europe, then I go to Australia. I decided I’m done when I’m done [on the album]. Hopefully I should be finished by the time I would arrive over there with you guys. I’m pretty far in.”

So what’s his scene?

“Obviously to create music. My family. I love driving my Ferraris. And I play tennis. Try to watch a good movie now and then. But it’s a lot of work.”

Here are 10 of the photos I like best, from gigs this year, in no particular order. Click on the photos to see the full galleries.

Yngwie Malmsteen has been inducted into the Swedish Music Hall of Fame in honour of his decades-long contribution music. Yngwie has had a busy couple of months – as well as the release of the […]

Tegan Voltaire, The Voltaire Twins
My scene is finding any excuse to dance with my 2 year old daughter Ruby.
Matthew Hardy, Comedian
Staying home out of harms way.
Peter Milley, Cairo Club Orchestra
What’s my scene? well…
And another thing I’ve been wondering lately
Oh, baby,
Tell me where have you been?
Now the stage is set
Where’s my Juliet, baby?
Is it maybe
My Midsummer Night’s Dream?
What’s my scene?
Clowns
Currently, I’m completely enveloped by writing my book; trying to complete the manuscript for my tome.
Jeff Duff
Yass KFC
Simon, Loon Lake
Our scene is folk that are interested in change. Not just music, but breaking the norm, the boundaries and stereotype of Australian ’rock/pop’ music. Unpredictable, the question marks, the new jokers in town. Don’t Believe The Haze.
Slumberhaze
We can be dirty, we can be imperfect, we can be classy, it doesn’t matter. We drift between scenes and eventually may just create our own.
The Ugly Kings
Currently its the Yarra River Trail I’m walking along. Generally my scene would be Melbourne. Nothing feels or compares to home.
Simon McConnell, The Delta Riggs
Our scene is in the city of Bath, a small city with a very big musical identity, we play the British festivals and I am also in the ’choirs scene’. We are also in other bands for fun, music all the way, roll on summer!
Su Hart, Baka Beyond
I like to think that I belong to the head-strong Independent Music Scene – where we – musos and audience and everyone in between – all make gigs/tours, recordings, releases happen for ourselves and work our arses off to keep it going for the rest of our lives – all for the love of Music!
Florelie Escano
All the kids who weren’t cool at school and still aren’t. Those people who didn’t manage to become awesome artists and uber hip performers. The raggy dolls who never found a way to make their raggy doll-ness work for them.
Jonathon Duffy
My scene is Brunswick. I love it. It provides me with just about everything I need.
About Charlie Marshall
Country roots, old time, bluegrass, folk, Americana scene Traditional plus :)
Whitetop Mountaineers
Flanelette pyjama pants.
Timberwolf
If you’re a Max Chillington then you’re our scene.
Gunslingers
I like to be out in the nature, to get away. Go to the woods. My dad lives in the woods. Maybe once or twice a year I don’t have phone reception there is no Wi-Fi
Fredrik Åkesson, Opeth
“Malcolm Hill is a lifetime member of the Melbourne Music Mafia and part of the ratpack of post punk Melbourne artists who have been keepin’ it real across diverse art forms for thirty years.”
Malcolm Hill
All the wandering. The bastards and the angels. The sound of the rain and the pains of the heart. The silence. All the houses and all the rooms. All the keys and phones.
Raised By Eagles
Experimental electronica, musical metacreation, multiplicitous media, hacking.
Ollie Brown
Aside from music and everything creative, I love open-mind people, unexpected humour, seeing the world and nature, riding my bicycle, playing billiards. I’m also a fan of coffee, whiskey and most things vintage.
Jessica Stuart Few
The car wash scene from Cool Hand Luke will do just fine thank you.
Old Gray Mule
Cool small bars with good food, good wine, good company
The Backsliders
Hot, hot lovers
Luke Monks, Gay Paris
Cool venues with good beer on tap that don’t mind us getting loud and getting room grooving so hard you feel the floor shaking.
Papa G and The Starcats
Anyone who welcomes a hairy, gold wearing, hot air blowing idiot to a dinner table is my scene.
Henry Wagons