Well our new single Get Off The Dope is a bit of a preview to the forthcoming album, and we’ve just released a clip to go with it channeling our inner Monty Python! Check it out: https://www.youtube.com/watch?v=KFvJNXMi8hE

How would you describe your sound in food form and why?
We’re a bit of a well cooked omelette. Plenty of tasty flavours in there, and every now and then a gristly bit to keep things honest!

Which song resonates most strongly and why?
For me, we have a new song called “Billie’s Gonna Die Young” which is a more furious chuggalong that we’re used to. There’s a good section at the back where we get to just hang on the groove and do our thing over the top. Not as organised as a lot of our other stuff and a good excuse just to delve rock in it’s purest and dumbest form.

Any on the road anecdotes?
Ask me in a week! We’ll be keeping a tour diary on the website dallascrane.com.au, so check out all the updates there. Hopefully something disastrous happens that gives everyone a good read!

Where do you draw inspiration from?
Where do I start? Always discovering great stuff every day that makes me go “wow”. We got so many band submissions for this tour from young guys wanting to tour with us, and I couldn’t believe how good everything was. It was really hard to cull it all down to a handful of acts. I wanted to give everyone a gig! We’re so lucky we have so many great artists in this country.

What’s next for you?
We finish the album off in the studio over March and will have it out later in 2015. It’s good to be thinking about Dallas Crane songs again and doing gigs. We’ve desperately missed it.

What’s your scene?
Right now it’s a room with no lights on. An unmade bed. A laptop with 9% battery and a mosquito that just refuses to die. 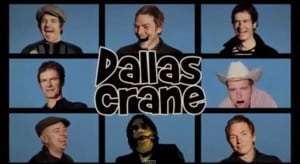 All tickets details are available at the band’s website www.dallascrane.com.au.

About Mary Boukouvalas 1232 Articles
Mary is a photographer and a writer, specialising in music. She runs Rocklust.com where she endeavours to capture the passion of music in her photos whether it's live music photography, promotional band photos or portraits. She has photographed The Rolling Stones, KISS, Iggy Pop, AC/DC, Patti Smith, Joe Strummer, PULP, The Cult, The Damned, The Cure, Ian Brown, Interpol, MUDHONEY, The MELVINS, The Living End, Foo Fighters, Smashing Pumpkins, Rage Against The Machine, The Stone Roses –just to name a few - in Australia, USA, Europe and the Middle East. Her work has been published in Beat magazine, Rolling Stone magazine, Triple J magazine, The Age Newspaper, The Herald Sun, The Australian, Neos Kosmos, blistering.com, theaureview.com, noise11.com, music-news.com. She has a permanent photographic exhibition at The Corner Hotel in Richmond, Victoria Australia.
WebsiteFacebookTwitterYouTube

Tell us about your new single/ album/ tour? Our new single ‘ticket’ is our most hardcore song in the feels department, its also the most brutal on the vocal chords. We also made a filmclip […]

Tell us about your upcoming album release: Our new LP ‘Torana Dreamin’ will be out on Nov. 11. We are honoured to have one of our favourite Australian Labels Tym’s Guitars releasing the Vinyl and […]

The 2018 line up of Progfest will be the strongest yet with Norway’s LEPROUS confirmed to headline all 3 Progfest festivals, plus headline their own sideshows in Perth and Adelaide!
Some of Australia’s finest acts including: Voyager, AlithiA, Orsome Welles, Meniscus and Dyssidia were confirmed for Progfest as part of the first round announcement. […]

The car wash scene from Cool Hand Luke will do just fine thank you.
Old Gray Mule
If you’re a Max Chillington then you’re our scene.
Gunslingers
My scene is finding any excuse to dance with my 2 year old daughter Ruby.
Matthew Hardy, Comedian
All of the above and more in my shed every Friday night
Hound
I am a simple man. My scene is simple. I like playing metal and spending time with my family.
Waclaw ”Vogg” Kieltyka, Decapitated
Scones, savory, sweet I don’t mind
The Wooden Sky
I just do my best to live a life full of the things I love. Rock’n’roll, photography, New York City – they are three things right there that I love a lot!
Paul Miles
Well I’m still looking for my scene, and I think I might have found it. Between the pages of What’s My Scene Magazine.
Dave Faulkner, Hoodoo Gurus
I like the beach more than anything. The beach feels like home all year round. In terms of a scene…I actually prefer to hermit most of the time.
Abbe May
Comedy, surreal show girls, burlesque and theatre
MC KREWD
I don’t wish to belong to any scene that would have me as a member (with thanks to Groucho Marx).
Bob Spencer, Raw Brit
Deep 70s disco, wonky synths, shady lyrics, fairy lights and cheap wine.