Tell us about your new mini album/ tour?
We have spent the better part of the last year crafting this new record. We are looking forward to getting back on the road and seeing how these tracks translate to the live format.

[pullquote]Where do you draw inspiration from?
Everything[/pullquote]How would you describe your sound in food form and why?
Okra – It looks kind of confusing and not for everyone

Which song resonates most strongly and why?
I would have to say 7. This track was complete the day it was written. It is the reason why theres another nantes record.

Any on the road anecdotes?
Van rule: If delta goodrem comes on the radio, clothes must be removed.

Where do you draw inspiration from?
Everything

What’s next for you?
More writing and recording. Hopefully play more shows.

What’s your scene?
My bedroom 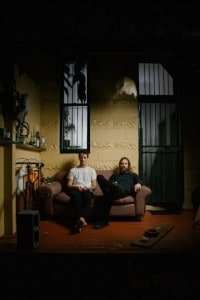 NANTES are back with a new single, new mini-album and a tour.

NANTES play 7 shows on the East Coast in support of their new single “7” from their new mini-album LIMBO.

NANTES core members, David Rogers and Jos Eastwood, wrote and recorded six new songs for LIMBO and the end result is a strong cohesive body of work that cuts through with power and poise and captures the uniqueness of NANTES.

Produced by Simon Todkill and David Rogers in Sydney, mixed by Tony Doogan (Mogwai, Belle & Sebastian) in Glasgow and mastered by Frank Arkwright (too many to mention!) at Abbey Road in London, LIMBO is released as a Limited Edition CD as well as digitally.

Having arrived in 2011 with the majestic “Fly” followed by other favourites “Charlie”, “Unsatisfy” and “Drones”, NANTES return with the follow up to their 2013 debut album BeingsBeing. LIMBO is released through the band’s Deadhand Music label and is distributed by MGM.

“7” and LIMBO will be featured live on an East Coast tour in April/May;

About Mandy Hall 816 Articles
Mandy is a music photographer & writer. She runs Mandy Hall Media, which includes Photography, Social Media marketing, PR & Graphic Design for the music industry. She is also a web developer - she created and supports this website.
WebsiteFacebookTwitterYouTube

“Malcolm Hill is a lifetime member of the Melbourne Music Mafia and part of the ratpack of post punk Melbourne artists who have been keepin’ it real across diverse art forms for thirty years.”
Malcolm Hill
Local bands at sticky carpet venues. Vinyl. Social networking. Keeping healthy in order to play full throttle live sets. Loud rehearsals. Good people with creative ideas. PRIMITIVE ROCK.
Jon S Williams of City of Cool
Fuck the Fucking Scene question! xo
Fuck The Fitzroy Doom Scene
I am a simple man. My scene is simple. I like playing metal and spending time with my family.
Waclaw ”Vogg” Kieltyka, Decapitated
My scene is a Punk-hardcore scene or an underground, minimal electronic scene, something grungy – where everyone is wearing black. That’s my vibe; don’t go out until 11 when all the other vampires come out and go home when the sun comes up at 7. Oh shit. Creatures of the night.
Greg Puciato, Killer Be Killed & Dillinger Escape Plan
All the wandering. The bastards and the angels. The sound of the rain and the pains of the heart. The silence. All the houses and all the rooms. All the keys and phones.
Raised By Eagles
The dog park’s pretty good. I have a couple of miniature pinchers. And they’re the loves of my life. I take them for walks to the dog park; I’ve got a Harley Davidson I ride around. It’s not too exciting. It used to be sex, drugs and rock n roll; now I walk my dogs.
Stan Lee, The Dickies
Melbourne. Nowhere else is as great as Melbourne.
Brat Farrar
Cool small bars with good food, good wine, good company
The Backsliders
Alice likes the Google. Sime likes taxidermy. It’s a pretty happening scene.
Sweet Jean
The Astor Theatre on chapel st. Old cinema with copious amounts of atmosphere playing classic films (Chaplin, Gene Kelly, Kubrick, etc) and me with a honeycomb choc top spilt on my Tshirt because that’s just how I roll.
Jude Perl, Comedian
The beach. Tea with gin at your grandparents house. They have the best stories.
Betty & Oswald
Experimental electronica, musical metacreation, multiplicitous media, hacking.
Ollie Brown
Wherever there is music is where I feel most at home
Toby Robinson
Cool venues with good beer on tap that don’t mind us getting loud and getting room grooving so hard you feel the floor shaking.
Papa G and The Starcats
My scene is finding any excuse to dance with my 2 year old daughter Ruby.
Matthew Hardy, Comedian
Deep 70s disco, wonky synths, shady lyrics, fairy lights and cheap wine.