Tell us about your new single/ album/ tour?
We’ve just release album #2 – Diamonds In The Bloodstream – so we’re hitting the road with Alt Country sweetheart, Ruby Boots throughout May. We’ll be at Newtown Social Club in Sydney on May 21 – Howler in Melbourne on May 22 – Black Bear Lodge in Brisbane on May 29. Regional dates to be announced soon!

How would you describe your sound in food form and why?
Christmas BBQ – It can be emotional and tumultuous but at the end of the day you’ll be lying on the couch wearing a stupid grin, half drunk, completely full, and totally satisfied.

Which song resonates most strongly and why?
Sugarcane. I think the music says as much as the lyrics do. It’s a cinematic travelogue of sound that represents a universal moment in time. Standing by the kitchen window, smoking a cigarette, listening to the night and longing for something else.

Any on the road anecdotes?
This is dangerous territory so I think I’ll stay away from it. Suffice to say that what happens on the road… stays on the road. Sometimes literally.

Where do you draw inspiration from? What’s your scene?
All the wandering. The bastards and the angels. The sound of the rain and the pains of the heart. The silence. All the houses and all the rooms. All the keys and phones. The little victories and dead ends. Friends and their music. Idiots and their noise. Home and distance and the undulating territories between… All the wandering.

What’s next for you?
Success and satisfaction

Raised By Eagles released their debut self-titled LP in July 2013 to a packed house at the Bella Union (Trades Hall) in Melbourne. Their entrance onto Melbourne’s musical landscape immediately garnered the attention of Alt.Country aficionados across the country and scored the band a nomination at The Age Music Victoria Awards that year for ‘Best Country Album’.

Since that time, continually raw and captivating performances have cemented their reputation as one of Melbourne’s most sought after independent acts. They delivered a blinding run of shows throughout 2014 that included appearing along-side international luminaries of the genre, Justin Townes Earle, Ryan Bingham and Lindi Ortega at the inaugural ‘Out On The Weekend’ Festival, (brought to us by Love Police Touring and Triple R 102.7FM) as well as performances at Apollo Bay, Kyneton, Jamgrass and Riverboats Music Festivals.

Raised By Eagles is certainly a band that hit the ground running, and shows no sign of slowing down. They return now with their highly anticipated follow-up album entitled ‘Diamonds In The Bloodstream’, released 20 April 2015 through Vitamin Records. A collection of interwoven tales covering the undulating territories of regret, hope, home and distance. Songs that remain unaffected by the smoke and mirrors of music in the post-modern era, and encapsulatethe art of storytelling at it’s heartfelt finest. 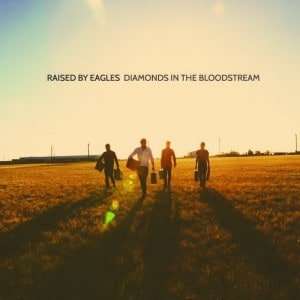 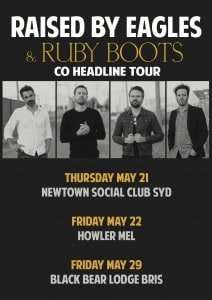 Q&A Tell us about your new single/ album/ tour? Our new album is reflects how we feel about things and puts it to music. We haven’t done a ‘tour’ as such but will be doing […]

Since its debut six months ago ‘The Night Sky Is A Jewellery Store Window’ has produced a gracious amount of beautifully organic videos of performances by some of Melbourne’s finest singer-songwriters. To celebrate this tiny […]

Ormsby Guitars, a pioneer in multiscale electric guitars, welcomes guitar virtuoso Rusty Cooley to its family of artists. Cooley is always pushing the boundaries of what the guitar can do, and he needs an instrument […]

Tegan Voltaire, The Voltaire Twins
Act III, Scene VI of King Lear. A tense and gripping scene wherein the ageing king informs his three daughters that they have all been accepted as contestants on Family Feud.
Ben Pobjie, comedian
My scene is a Punk-hardcore scene or an underground, minimal electronic scene, something grungy – where everyone is wearing black. That’s my vibe; don’t go out until 11 when all the other vampires come out and go home when the sun comes up at 7. Oh shit. Creatures of the night.
Greg Puciato, Killer Be Killed & Dillinger Escape Plan
Scones, savory, sweet I don’t mind
The Wooden Sky
Melbourne. Nowhere else is as great as Melbourne.
Brat Farrar
Quirky cabaret bars that serve a mean G&T and boast a stellar cocktail list..which is why you’ll always find me returning to The Butterfly Club! I also love the buzz of a Fringe or Cabaret Festival, or a smart Opening Night. Any excuse for a dress up, really!
Amelia Ryan, Lady Liberty
Our scene is this big gorgeous wide world we live in all its majestic splendour!
Kim Salmon, The Darling Downs
It’s beards.
Nathaniel Beard, The Beards
When I’m not working in the studio or doing shows I’m at home with my partner and our baby so I guess they are my scene.
Way of the Eagle
“Malcolm Hill is a lifetime member of the Melbourne Music Mafia and part of the ratpack of post punk Melbourne artists who have been keepin’ it real across diverse art forms for thirty years.”
Malcolm Hill
My scene is Brunswick. I love it. It provides me with just about everything I need.
About Charlie Marshall
Any scene with Al Swearangen & Mr. Wu from the show Deadwood ;)
Mathas
Book clubs, philosophy and extreme black metal
Elsen Price
Well these days my scene tends to revolve around my computer and being nudged by my dog to take her out for a walk. And then having my wife shout at me for spending time on my computer. I’m loving it actually. I’m quite relishing that scene. I miss them both very much.
Peter Hook, Joy Division/New Order/The Light
No set scene. We have played with a variety of bands from King Parrot to The Datsuns. Offer us a show and give us a try!
Los Hombres Del Diablo
Going to the river on sunny afternoons with the blow up dingys and resting your beers on lily pads.
The Frowning Clouds
That’s a hard one, although I do love anything electronic with an indie-pop feel!
Franki
I like the beach more than anything. The beach feels like home all year round. In terms of a scene…I actually prefer to hermit most of the time.
Abbe May
I have no idea what my scene is; I have been listening to Dubstep and a bit of Drum N Bass. I found a lot of Hip Hop and RnB stuff is getting very interesting again it is pushing different sounds out. I’ve been really into cycling since the early ‘90s; racing mountain bikes and racing road bikes. So between cycling and music there is not much time left, a bit of sleep now and again.
Mike Edwards, Jesus Jones
I will continue the continuum, singing my Songline.
Kutcha Edwards
World/folk. Acoustic and proud of it!
Ilana Cravitz, The London Klezmer Quartet
Rock’n’Roll
About Heels on Decks
Currently, I’m completely enveloped by writing my book; trying to complete the manuscript for my tome.
Jeff Duff
It’s Thonbury. It’s my dreaming. I’ve lived here 30 years and it’s evolved with me. The more I drink wine, the more wine bars appear in the neighbourhood. The more I eat, the more cafes appear in the neighbourhood. Fantastic.
Denise Scott, Comedian
Aside from music and everything creative, I love open-mind people, unexpected humour, seeing the world and nature, riding my bicycle, playing billiards. I’m also a fan of coffee, whiskey and most things vintage.
Jessica Stuart Few
The Astor Theatre on chapel st. Old cinema with copious amounts of atmosphere playing classic films (Chaplin, Gene Kelly, Kubrick, etc) and me with a honeycomb choc top spilt on my Tshirt because that’s just how I roll.
Jude Perl, Comedian