Tell us about your new single/ album/ tour?
We’ve just released our new single ‘King Of Bohemia.’ It’s loosely about this homeless guy in Newtown who we see nearly everyday. It’s the delusions of a madman but also a homage to the value of a life spent moneyless. How do we measure existence and what is more fulfilling? A life of security or one spent living on the edge? Passionate and unimaginable.

We are also going on tour to promote the song in April with our band. We’ll be going to Sydney, Melbourne, Brisbane and a few regional spots before heading to Canada in May to play Canadian Music Week and get whisked up in the magical land of Montréal and Toronto again.

How would you describe your sound in food form and why?
A tin of chickpeas with a twist of lemon. One time I was in Paris and I’d run out of money so I would eat tins of chickpeas with lemon on the street. I was reading Hemingway’s ‘A Moveable Feast’ and in the book he was in Paris without any money and he’d pick the chestnuts from the big parks and eat them. He talked about how the hunger he felt could be satisfied by something greater than food. I know that if I’m eating a tin of chickpeas with lemon then something incredible is probably going to happen. Sometimes it’s good to be a little hungry.

Which song resonates most strongly and why?
Anything that captures the grittiness of life.

Any on the road anecdotes?
Well our tour van is this old plumbing van which has ‘Hanna Plumbing’ written all over it and when we go on tour we sleep in it. It’s great because it’s a plumbing van so no one knows you’re in it. The number of times we’ve opened the van door in the mornings half asleep, half naked, a little undershowered to find ourselves face to face with someone. It’s been old ladies, inner city business people sipping on their lattes, and every time there’s always that second of eye-contact and the look of shock as the realisation dawns on them that some scraggly strangers have been sleeping in front of their house, or next to their cafe table. It’s just become a casual tour ritual, so don’t get a shock if you find us brushing our teeth by your front lawn. We’ve probably slept in front of your house too.

What’s next for you?
A tour, Canada, and probably some chickpeas and lemon.

What’s your scene?
The beach. Tea with gin at your grandparents house. They have the best stories. 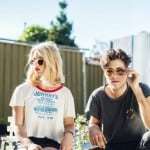 Gritty, mediterranean, reckless abandonment. Whiskey on the back of a motorcycle on a tiny island in Greece. What is the sound of Betty & Oswald? They walk the fine line of an aesthetic which is both nostalgic and modern. They recall Tom Waits and Louis Prima but there is also something distinctively new about what they do. Describing their music is a difficult task, yet it is its elusiveness which renders it so appealing and fresh. They have been praised for their highly engaging live show. Their genre-bending, kaleidoscopic sound and outrageous stories leave any audience enthusiastic, sweaty and tangled. Their music, and the brand that Betty & Oswald have created, is unique, exciting and cool, a fact that has ensured their success so far, and promises for an exciting future. At the heart of Betty & Oswald is a grittiness, a reckless abandonment, an honesty of youth, adventure and experience.

Tegan Voltaire, The Voltaire Twins
Book clubs, philosophy and extreme black metal
Elsen Price
The car wash scene from Cool Hand Luke will do just fine thank you.
Old Gray Mule
Cool venues with good beer on tap that don’t mind us getting loud and getting room grooving so hard you feel the floor shaking.
Papa G and The Starcats
Country roots, old time, bluegrass, folk, Americana scene Traditional plus :)
Whitetop Mountaineers
Currently, I’m completely enveloped by writing my book; trying to complete the manuscript for my tome.
Jeff Duff
Aside from music and everything creative, I love open-mind people, unexpected humour, seeing the world and nature, riding my bicycle, playing billiards. I’m also a fan of coffee, whiskey and most things vintage.
Jessica Stuart Few
We can be dirty, we can be imperfect, we can be classy, it doesn’t matter. We drift between scenes and eventually may just create our own.
The Ugly Kings