Tell us about your new single/ album/ tour?
The latest album, ‘Dark Side’ (released March 2014) is a collection of blues, folk, Cajun and gospel influenced sounds with song themes as diverse as the old world scenes of Sydney’s Newtown in ‘Dark Side of Newtown’, to an ode to the legendary Balfa Brothers in the Louisiana Cajun influenced ‘Light on Tonight’, to the modern day rant on loud mobile phone talkers in ‘Phone Cap Blues’.

How would you describe your sound in food form and why?
Chorizo rich jambalaya served with craft beer and Vietnamese mint. It has bite yet light and shade and draws musically from various regions parts of the world.

Which song resonates most strongly and why?
‘Dark Side of Newtown’. I have a long family history in the Sydney suburb of Newtown so the song means a lot to me.

Where do you draw inspiration from?
Musically from various genres but primarily from the blues from North Mississippi.

What’s next for you?
More touring – more playing and hopefully begin on a new album late in the year.

2011 ARIA Blues and Roots nominees and I-Tunes Australian Blues and Roots album of the year winners, Backsliders have been playing, touring the festival circuit and recording for 27 years. The latest release (due March 2014) ‘Dark Side’, their 13th to date, features their trademark driving Delta and Mississippi Hill country blues sounds mixed in with original 21st Century new blues anthems. 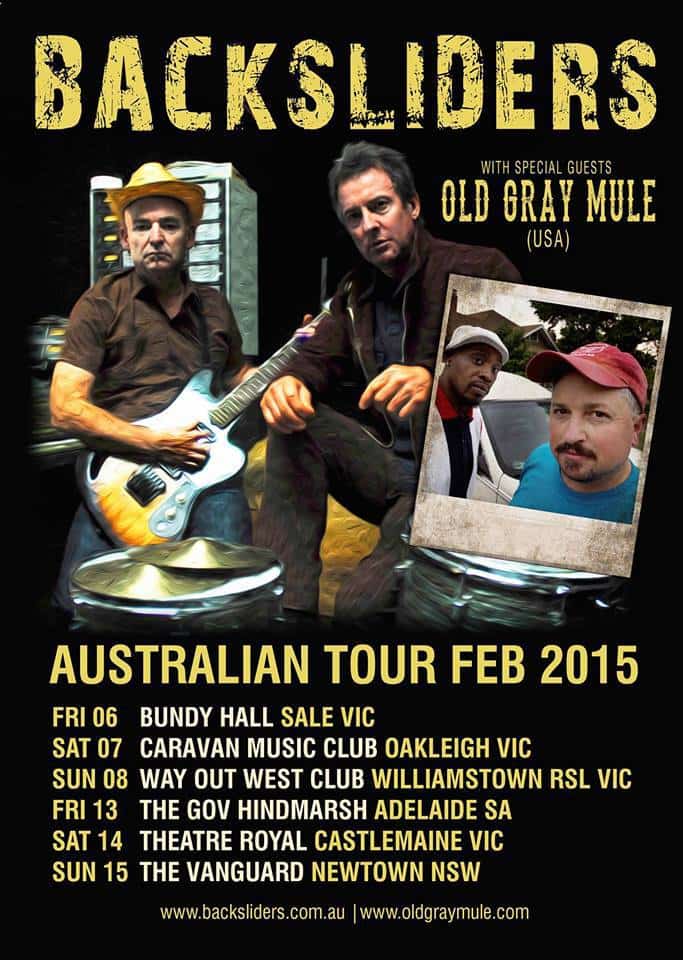 Today we’re looking back on the first ever gig of Australian instro surf/psych band The Break. Consisting of Rob Hirst, Jim Moginie & Martin Rotsey (Midnight Oil) and Brian Richie (Violent Femmes). This was the […]

Tell us about your new single/ album/ tour? My last album the self titled ‘Mundy’ came out in May 2015. It was produced by Youth from U.K. Band Killing Joke. He also produced my first […]

Tegan Voltaire, The Voltaire Twins
My scene is a Punk-hardcore scene or an underground, minimal electronic scene, something grungy – where everyone is wearing black. That’s my vibe; don’t go out until 11 when all the other vampires come out and go home when the sun comes up at 7. Oh shit. Creatures of the night.
Greg Puciato, Killer Be Killed & Dillinger Escape Plan
My scene is at the moment Big Wongs General Tsos Chicken as I get sauce on the keys typing to you :-)
Brian Mackey
Any scene with Al Swearangen & Mr. Wu from the show Deadwood ;)
Mathas