Tell us about your new album.
It was recorded in a room at home, with John Hudson and Ewen Baker and myself playing live, as you would when you’re jamming. We played and played, until we captured a performance we were happy with. We then added Double Bass and strings. It was also done with really beautiful old valve technology. Very rich sounds, very warm. Musically, it’s a bold attempt to create a style of modern folk music that is distinctively Australian, while honouring Celtic, blues and country traditions. Lyrically, it takes traditional forms and uses them in a contemporary way. It’s a big, expansive, rambling set of stories and ideas, exploring love, mortality, the decay of Western society and the need for women to take a leading role. The World’s in crisis and basically unled. The old way of doing things has failed and we need to be boldly creative and re-imagine a new way forward into the future.

How would you describe your sound in food form and why?
It’s elemental really. Fresh caught seafood, cooked over a fire of coals on the beach where it’s been caught or gathered. Rich and natural and good for you.

Any on the road anecdotes?
I remember touring with Bart Willoughby and Aboriginal band, Coloured Stone through Central Australia in 1985, after the Handback of Uluru to the traditional owners. We were due to play at Amaroo, a remote desert community, one evening. There was a torrential downpour en route and many of the dry creeks filled to raging torrents and became impassable. We finally made it to Amaroo at about 10:30pm and an old man there told us we were, “Too late. Everyone sleeping now“. We were woken early and did the concert at about 8am! Unusual hours for musicians but we were on desert time. Everyone threw money into a bucket and gave generously and away we went to the next show, 500 kms away.

Where do you draw inspiration from?
From nature and from lived experience. I try to push myself to engage in the world of big and small things. I read a lot of poetry and I always have my ear to the ground for a great song. There’s a poignant quote from William Carlos Williams poem, Asphodel, that says,
“It is difficult to get the news from poems
yet men die miserably every day for lack of what is found there.”

What’s next for you?
We take the songs on tour around Australia and then to Ireland mid year. Songs are no use without ears to hear them. They are written for ‘the other’, so it’s a symbiotic relationship with your audience. They have to be tested to see if they have meaning and use to others. I’m also working on a series of major theatre concerts for the end of 2015, called EXILE, that explores the rich history of the Irish in Australia in song. There’s always the next album and the next body of work. It’s never-ending….fortunately.

What’s your scene?
I love being on a little boat near home in South West Victoria with a fishing line in the water, the Sun coming up or going down. I also love walking the streets of Melbourne or Manhattan or many of the beautiful towns and villages of Ireland or anywhere. My partner and my family are central to it all. I also love being in the midst of a great music session, anywhere, anytime, being transported into the soul of the Universe. 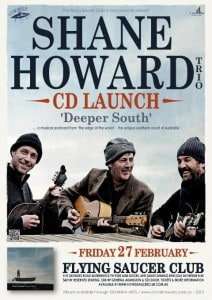 Shane Howard & band will perform a special CD Launch at the Flying Saucer Club on Friday 27th February. Be treated to an array of Howard songs from his new CD entitled ‘Deeper South’ which is a musical postcard from ‘the edge of the world’ – the unique southern coast of Australia. The album features songs full of music and poetry that are deep and dark yet illuminated by great shafts of light. Shane was the founding member of the legendary Australian band ‘Goanna’, known for their chart-topping song ‘Solid Rock’. Supporting Shane on the night will be Irish born, singer songwriter, Aine Tyrrell. Be sure not to miss the incredible talent that is Shane Howard!

“He sounds as though he has drunk from the same fountain that gave the world Henry Lawson, Woody Guthrie and Bob Dylan”
Bruce Elder – Sydney Morning Herald

Q&A by Brendan Ewing Tell us about your production/performance/play. I play a guy called Jeremy Pluck. In a show called Pluck. So I’m like the title character. Some would say the main character, and they’d be […]

Blood Moon EP track-by-track by Montana Sharp  Way of the Whiffler This is the oldest song on the listing, but also the one that took the longest time to complete in production. I found the […]

Tegan Voltaire, The Voltaire Twins
I just do my best to live a life full of the things I love. Rock’n’roll, photography, New York City – they are three things right there that I love a lot!
Paul Miles
Country roots, old time, bluegrass, folk, Americana scene Traditional plus :)
Whitetop Mountaineers
Sitting in the sun, in a nice chair, with a good book.
James Reyne
Ep. 1 Series 3 of BBC’s ’Sherlock’ where Sherlock bungee jumps through a window and kisses Molly Hooper.
Miss Adelaide Everheart from Early Burley Burlesque
Book clubs, philosophy and extreme black metal
Elsen Price
World/folk. Acoustic and proud of it!
Ilana Cravitz, The London Klezmer Quartet
Well I’m still looking for my scene, and I think I might have found it. Between the pages of What’s My Scene Magazine.
Dave Faulkner, Hoodoo Gurus
Experimental electronica, musical metacreation, multiplicitous media, hacking.
Ollie Brown
I think my style is more just making cameos in everyone else’s scene.
Mojo Juju
Wherever there is music is where I feel most at home
Toby Robinson
Our scene is this big gorgeous wide world we live in all its majestic splendour!
Kim Salmon, The Darling Downs
All the kids who weren’t cool at school and still aren’t. Those people who didn’t manage to become awesome artists and uber hip performers. The raggy dolls who never found a way to make their raggy doll-ness work for them.
Jonathon Duffy
I will continue the continuum, singing my Songline.
Kutcha Edwards
Art is my scene. No labels, restrictions or judgement. I love art in all it’s varied glory.
The Last 5 Queers
It’s a delirium, really, but I like to live like this.
Hugo Race
Yass KFC
Simon, Loon Lake
We can be dirty, we can be imperfect, we can be classy, it doesn’t matter. We drift between scenes and eventually may just create our own.
The Ugly Kings
No set scene. We have played with a variety of bands from King Parrot to The Datsuns. Offer us a show and give us a try!
Los Hombres Del Diablo
If you’re a Max Chillington then you’re our scene.
Gunslingers
Comedy, surreal show girls, burlesque and theatre
MC KREWD
Staying home out of harms way.
Peter Milley, Cairo Club Orchestra
Obviously to create music. My family. I love driving my Ferraris.
Yngwie Malmsteen
Aside from music and everything creative, I love open-mind people, unexpected humour, seeing the world and nature, riding my bicycle, playing billiards. I’m also a fan of coffee, whiskey and most things vintage.
Jessica Stuart Few
All of the above and more in my shed every Friday night
Hound