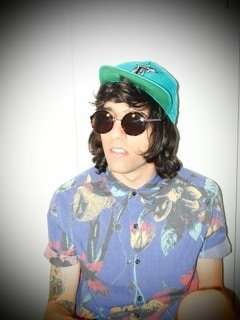 Tell us about your new single/ album/ tour?
I have a brand new record out called “Caribbean Gold” Its full of Indie synth pop and funk goodness, this May we hit the road with a full live band, we will be bringing along the big cheesy sing alongs and “Long hair, don’t care” dance moves.

How would you describe your sound in food form and why?
In and out burger, because everything they sell is made fresh in the store on the day and I like to think that the World Wild sound is also just as fresh if not fresher. fresh!

Which song resonates most strongly and why?
The track “Caribbean Gold” was a poem that my dad wrote to me while he was living in Barbados, My father is a poet and has been a huge inspiration as he is the hardest worker I have ever met. That song means a lot to me, I called the record Caribbean Gold for him.

Any on the road anecdotes?
Our first show was in Melbourne, here’s a pic from that trip (Pic attached) 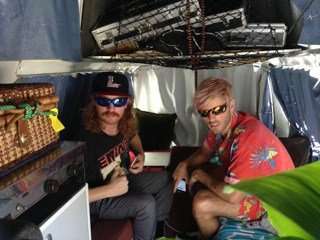 Where do you draw inspiration from?
I draw a lot of inspiration from the 80’s, the photographs, posters, postcards, fashion, video’s, skateboards and MOVIES from the era really tingle my spine, Glen Friedman, Phill Collins, Vivienne Westwood, Malcolm McLaren, Christian Hosoi, John Hughes, Corey Feldman always capture my full attention. I also have an over active brain, my imagination is bigger than me and keeps me rolling around the bed at night to the point of me being in the studio days on end without sleep. Its quite an interesting state to be in…

What’s next for you?
Im going to buy an 80’s video camera and make something fun, I want to print a whole new range of merch up and film people doing obscure things in them with a World Wild track over the top of it. I also want to release some limited singles on cassette whilst I finish recording my next EP. After tour I will be back in full creative mode. I have some serious colabs coming up too!

Hailing from Adelaide, Jarrad Lee Jackson aka World Wild is the mystical face behind the next synth sensation World Wild. With his debut EP recently released and east coast tour kicking off May 21st, Jarrad is also heading his own retro meets surfer/skater fashion label which intends to expand the way that music and culture are seen together – hand in hand, bringing you the sounds, visuals and feels of the 80’s rebirth.

Once a punk rock drummer in former band Dangerous! Jarrad has now done a 180 not only producing and recording but also singing and writing, dedicating all of his raw passion for the new World Wild pop rock.

World Wild is now set to capture the souls of the 80’s skate ‘n’ surf revelers. As in the words of Jarrad Lee Jackson – “Now lets dance in the freedom air of nostalgia”

Wherever there is music is where I feel most at home
Toby Robinson
Alice likes the Google. Sime likes taxidermy. It’s a pretty happening scene.
Sweet Jean
Rock’n’Roll
About Heels on Decks
Leadfinger is a very strange band, hard to define, but we are free.
Stew, Leadfinger
Cool small bars with good food, good wine, good company
The Backsliders
Well these days my scene tends to revolve around my computer and being nudged by my dog to take her out for a walk. And then having my wife shout at me for spending time on my computer. I’m loving it actually. I’m quite relishing that scene. I miss them both very much.
Peter Hook, Joy Division/New Order/The Light
Melbourne. Nowhere else is as great as Melbourne.
Brat Farrar
My scene is at the moment Big Wongs General Tsos Chicken as I get sauce on the keys typing to you :-)
Brian Mackey
Quirky cabaret bars that serve a mean G&T and boast a stellar cocktail list..which is why you’ll always find me returning to The Butterfly Club! I also love the buzz of a Fringe or Cabaret Festival, or a smart Opening Night. Any excuse for a dress up, really!
Amelia Ryan, Lady Liberty
Right now it’s a room with no lights on. An unmade bed. A laptop with 9% battery and a mosquito that just refuses to die.
Dave Larkin, Dallas Crane
The beach. Tea with gin at your grandparents house. They have the best stories.
Betty & Oswald
My scene is driving fast cars and shooting guns.
Ace Frehley
I think my style is more just making cameos in everyone else’s scene.
Mojo Juju
I like to think that I belong to the head-strong Independent Music Scene – where we – musos and audience and everyone in between – all make gigs/tours, recordings, releases happen for ourselves and work our arses off to keep it going for the rest of our lives – all for the love of Music!
Florelie Escano
I’m in with the Out-Crowd
Dave Warner
What’s my scene? well…
And another thing I’ve been wondering lately
Oh, baby,
Tell me where have you been?
Now the stage is set
Where’s my Juliet, baby?
Is it maybe
My Midsummer Night’s Dream?
What’s my scene?
Clowns
“Malcolm Hill is a lifetime member of the Melbourne Music Mafia and part of the ratpack of post punk Melbourne artists who have been keepin’ it real across diverse art forms for thirty years.”
Malcolm Hill
I don’t wish to belong to any scene that would have me as a member (with thanks to Groucho Marx).
Bob Spencer, Raw Brit
All of the above and more in my shed every Friday night
Hound
Country roots, old time, bluegrass, folk, Americana scene Traditional plus :)
Whitetop Mountaineers
Act III, Scene VI of King Lear. A tense and gripping scene wherein the ageing king informs his three daughters that they have all been accepted as contestants on Family Feud.
Ben Pobjie, comedian
All the wandering. The bastards and the angels. The sound of the rain and the pains of the heart. The silence. All the houses and all the rooms. All the keys and phones.
Raised By Eagles
Hot, hot lovers
Luke Monks, Gay Paris
Our scene is in the city of Bath, a small city with a very big musical identity, we play the British festivals and I am also in the ’choirs scene’. We are also in other bands for fun, music all the way, roll on summer!
Su Hart, Baka Beyond
My scene is Brunswick. I love it. It provides me with just about everything I need.
About Charlie Marshall
It’s beards.
Nathaniel Beard, The Beards
It’s Thonbury. It’s my dreaming. I’ve lived here 30 years and it’s evolved with me. The more I drink wine, the more wine bars appear in the neighbourhood. The more I eat, the more cafes appear in the neighbourhood. Fantastic.
Denise Scott, Comedian
The dog park’s pretty good. I have a couple of miniature pinchers. And they’re the loves of my life. I take them for walks to the dog park; I’ve got a Harley Davidson I ride around. It’s not too exciting. It used to be sex, drugs and rock n roll; now I walk my dogs.
Stan Lee, The Dickies
Deep 70s disco, wonky synths, shady lyrics, fairy lights and cheap wine.