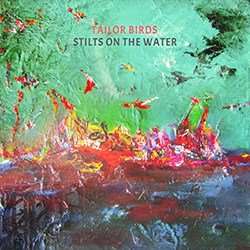 Album: Stilts on the Water

The Stilts on the Water tour

Stilts on the Water for sure.  A year ago I moved to going on the road full time, doing the majority of shows, solo.  Constantly performing, our style shifted, responding to what I felt people were looking for, or were perhaps missing.  It was a very organic way of moving forward, and was inevitable.

And so I wanted to create something that would help others find some sort of peace within this crazy world of ours, but also something to inspire.  And so at the end of our tour last summer, we went into the studio in far northern Holland, and the result was this.  A bit of a concept record, it links our past work and suggests where we’re headed in the future, and seems to be providing what I had hoped it would.

They say things come in 3’s don’t they – last year was quite a year……a broken ankle with 9 screws and a metal plate fitted, my touring luggage thrown out of a coach window, the death of a close friend……and in a bit of a bigger picture, Grenfell towers was destroyed, the refugee crises got more intense, and people we met (and the ones we didn’t meet) – it felt like they wanted some sort of change.  This somehow all fed into our work.

Jam…….we’ve lately been making some limited release pots of jam, from local produce……limited edition jams, it constantly changes, sweet, savoury, always a surprise, it looks like we’ve got a lime inspired one coming soon.

The people we meet – they are the reason I do this.

Gorillaz Superfast Jellyfish.  I love the gorillaz’ concept, and the video for this is great……however it’s a toss up between that and Irfan, a Bulgarian band, The Eternal Return, or any of their songs……love these guys.

I’ve been touring ‘Stilts on the Water’ of course, though I’m currently also finishing off a bit of a best of record.  Six tracks, old and new, and that’s due for a bit of a pre-release for our Europe summer tour.  Whilst getting this record complete, we’re set to play St Albans Folk Fest in NSW in late April, plus numerous pop up gigs and markets, a yoga class down in Sydney way, and shows all the way up to Cooktown for a lush boat gig.  That, plus a few other surprises.

Then in late June, I head to Europe to do a 6th Europe tour – Italy, a whole month in Ireland, a couple of local Dutch festivals, and a few other gems…….we’ve a few exciting announcements re. all of this, but we have to wait til we can actually announce it!!!  So stay tuned.

In any case, touring continues, we may even do some specially curated memorable events in beautiful spaces, and we’re also working on getting some new visuals made……..in any case, it all continues.  As we do this full time, dates go up pretty regularly, so just keep checking back on http://tailorbirdsmusic.com/


Jourama Falls, one of the most beautiful spectacular places I’ve ever been to.  Up North Queensland it’s as if you’ve stepped into a dream.

And that, combined with Ireland, one of my favorite places to be, a place where music has a place in this world, everywhere and anywhere.

Beauty and people, one of the 2 most important things, these bring goodness in a way that happens as if by magic.