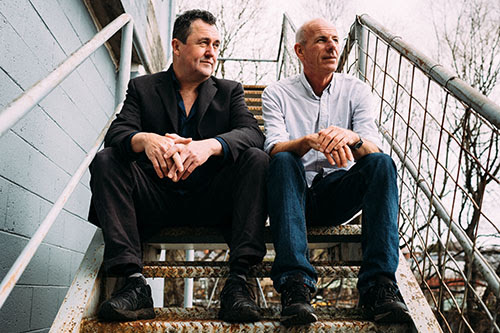 Tell us about your new single/ album/ tour?
This is an unusual and (I hope) very original EP since it combines classical with contemporay sensibilities. The arrangements are all acoustic, and the songs draw inspiration from medieval music through to post modern psychedelia. Sparkling effervescent textures, trumpets, percussion, dobros, classical and 12-string guitars and even a 1966 ‘Beatle Bass’ all come together to create our soundscape.

What’s your favourite work at this point in time?
I think ‘Turn Out the Light’ has come up really well. It’s my take on a classic ballad, and I think the weaving of classical guitars through the song is successful. Of course the beautiful mix by Damien Gerard Studios and polish of King Willy Sound mastering has added incredible lustre.

Tell us a quick, on the road or studio, anecdote.
Currently working on a calypso style song which is a lot of fun. Using a rubber squeeze pig, softdrink and WD 40 cans as added percussion. But halfway through a take my Great Dane got up and shook himself, and the jangly dog tags sound excellent!


What, or who, inspires you?

This is probably a bit predictable, but Beethoven must be my favourite composer. The rhythmic drive, passion and attention to detail is an inspiration. But then I’m a huge Bon Scott fan. I really inhabit two musical worlds which I hope to synthesize in my writing.

I’d be pretty happy if I’d penned ‘Golden Slumbers’ or ‘Something’.

What’s next for you?
Well, probably trying to write the song I wish I’d written! Yes, definitely.

What’s your scene?
The Tassie outdoor environment. It does inspire. I get a thrill from seeing a fish or eagle…..

What happens when the musical worlds of an ARIA Award winning classical guitarist and a hard-hitting rock singer collide? The answer in this case lies in an unusually refined and confident EP titled Don’t Tempt Me, to be released on Planet/MGM September 21.

It’s not easy to describe such an accomplished EP as this one. To begin with, the arrangements are all acoustic and highly sophisticated. Little wonder, since these songwriters have roughly 1000 years of music history bubbling away in their consciousness. But alongside this knowledge is a keen awareness of contemporary sensibilities. Sparkling effervescent textures, trumpets, percussion, dobros, classical and 12-string guitars and even a 1966 ‘Beatle Bass’ all combine to create a unique and original soundscape.

This Australian songwriting team of Gareth Koch and Peter Bonner draws inspiration from medieval music to post-modern psychedelia, with every imaginable influence in between. Bonner and Koch have a strong and immediately recognisable musical identity, a new sound and aesthetic that comes with a fluid movement across genres. The result is an array of catchy pop tunes, soulful ballads, blues grooves and rock songs.

“Don’t Tempt Me is a feast for the ears” – William Bowden-King Willy Sound.

Some Background About the Players:
Tell us about the moment you decided to become a singer/writer/band? What did your family/friends have to say about it?

Gareth: I started learning piano at age 7, but I sensed I wanted to be ‘in the music’ when Eagle Rock and Maggie May hit the Sydney airwaves. I must have been 8! But it was when I lived in Andalucia Spain (age 12) that I realised my destiny lay with the guitar…

Peter: I started singing at a very early age being surrounded by a family who loved music, but I was very shy and didn’t sing to an audience until my 20’s.

Tell us a little about your writing process, how does a song come along? What gets you going creatively?

Gareth: Much has been written about the creative process, yet somehow it remains shrouded in mystery. My PHD thesis explored the act of creation and the workings of the unconscious mind during the act of creation. I think much of the process occurs unconsciously…then the analytical process can begin.

Peter: I like to write about real experiences and my feeling about them. Most of the time I begin with an acoustic guitar and write the music before the lyrics.

What is the first record you bought and why?

Peter: The first record was a 45 single by The Vibrants – a band from South Australia doing a cover of The Four Tops song “Something About You Baby”. I must have been about 7 years old and loved the guitar sound and vocals.

What’s My Scene magazine is proud to present the video premier of Hussy Hick’s new single, Silence Creeping. Although they’ve been playing together since 2005, February 2018 marks ten years since Gold Coast act Hussy […]

Diana Anaid takes us on a heartfelt journey through her latest release, MY QUEEN, track-by-track: Into Your Heart ‘Into Your Heart’, previously known as ‘Rabbit Hole’ was inspired by the psychedelic front woman of Jefferson […]

Our scene is folk that are interested in change. Not just music, but breaking the norm, the boundaries and stereotype of Australian ’rock/pop’ music. Unpredictable, the question marks, the new jokers in town. Don’t Believe The Haze.
Slumberhaze
All of the above and more in my shed every Friday night
Hound
The car wash scene from Cool Hand Luke will do just fine thank you.
Old Gray Mule
I think my style is more just making cameos in everyone else’s scene.
Mojo Juju
Right now it’s a room with no lights on. An unmade bed. A laptop with 9% battery and a mosquito that just refuses to die.
Dave Larkin, Dallas Crane
Alice likes the Google. Sime likes taxidermy. It’s a pretty happening scene.
Sweet Jean
Country roots, old time, bluegrass, folk, Americana scene Traditional plus :)
Whitetop Mountaineers
We can be dirty, we can be imperfect, we can be classy, it doesn’t matter. We drift between scenes and eventually may just create our own.
The Ugly Kings
Our gigs have an air of danger and sex. Beautiful women are free to express themselves and are as dangerous as hell. Everybody can have a good time ’cos there’s a lot of love in the room and we just can’t help but stomp out that primeval swamp boogie ooze.
Chris Russell’s Chicken Walk
My scene is Brunswick. I love it. It provides me with just about everything I need.
About Charlie Marshall
I don’t wish to belong to any scene that would have me as a member (with thanks to Groucho Marx).
Bob Spencer, Raw Brit
Cool small bars with good food, good wine, good company
The Backsliders
Well these days my scene tends to revolve around my computer and being nudged by my dog to take her out for a walk. And then having my wife shout at me for spending time on my computer. I’m loving it actually. I’m quite relishing that scene. I miss them both very much.
Peter Hook, Joy Division/New Order/The Light
Yass KFC
Simon, Loon Lake
Wherever there is music is where I feel most at home
Toby Robinson
That’s a hard one, although I do love anything electronic with an indie-pop feel!
Franki
Scones, savory, sweet I don’t mind
The Wooden Sky
Local bands at sticky carpet venues. Vinyl. Social networking. Keeping healthy in order to play full throttle live sets. Loud rehearsals. Good people with creative ideas. PRIMITIVE ROCK.
Jon S Williams of City of Cool
Art is my scene. No labels, restrictions or judgement. I love art in all it’s varied glory.
The Last 5 Queers
Leadfinger is a very strange band, hard to define, but we are free.
Stew, Leadfinger
I love being on a little boat near home in South West Victoria with a fishing line in the water, the Sun coming up or going down. I also love walking the streets of Melbourne or Manhattan or many of the beautiful towns and villages of Ireland or anywhere. My partner and my family are central to it all. I also love being in the midst of a great music session, anywhere, anytime, being transported into the soul of the Universe.
Shane Howard
It’s beards.
Nathaniel Beard, The Beards
My scene is a Punk-hardcore scene or an underground, minimal electronic scene, something grungy – where everyone is wearing black. That’s my vibe; don’t go out until 11 when all the other vampires come out and go home when the sun comes up at 7. Oh shit. Creatures of the night.
Greg Puciato, Killer Be Killed & Dillinger Escape Plan
I like the beach more than anything. The beach feels like home all year round. In terms of a scene…I actually prefer to hermit most of the time.
Abbe May
I’m in with the Out-Crowd
Dave Warner
I like to think that I belong to the head-strong Independent Music Scene – where we – musos and audience and everyone in between – all make gigs/tours, recordings, releases happen for ourselves and work our arses off to keep it going for the rest of our lives – all for the love of Music!
Florelie Escano
Flanelette pyjama pants.
Timberwolf
Anyone who welcomes a hairy, gold wearing, hot air blowing idiot to a dinner table is my scene.
Henry Wagons
The TV show “Full House
World Wild
Our scene is in the city of Bath, a small city with a very big musical identity, we play the British festivals and I am also in the ’choirs scene’. We are also in other bands for fun, music all the way, roll on summer!
Su Hart, Baka Beyond
Currently its the Yarra River Trail I’m walking along. Generally my scene would be Melbourne. Nothing feels or compares to home.
Simon McConnell, The Delta Riggs
I have no idea what my scene is; I have been listening to Dubstep and a bit of Drum N Bass. I found a lot of Hip Hop and RnB stuff is getting very interesting again it is pushing different sounds out. I’ve been really into cycling since the early ‘90s; racing mountain bikes and racing road bikes. So between cycling and music there is not much time left, a bit of sleep now and again.
Mike Edwards, Jesus Jones
Deep 70s disco, wonky synths, shady lyrics, fairy lights and cheap wine.