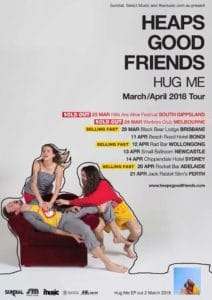 Tell us about your upcoming tour? It’s your first headline tour, correct?

AB SO LUTELY! It will indeed be our first headline tour and we’re a big spoon full of milo kind of excited for it! We’re itching to have some dance offs, hopefully some handstand competitions. But I think we’re most excited to sniff a couple of strangers.

What’s your favourite song from your new EP Hug Me?

My personal favourite is ‘Lobster Bibs’ because it reminds me of kicking off my shoes shoes after a really long week and just cuddling up with my buddies and beating the final boss level of an overnight rental from Blockbuster. Super rewarding.

How would you describe your sound in food form?

We were once described as Peanut Brittle, BUT I totally reckon we’re more Fairy Bread. Hell yummy and colourful, a little bit childish, but once you let go, you can’t help but have fun. It doesn’t matter how old you are, everyone gets loud once the fairy bread comes out.

Late last year, we played this super fun festival in Adelaide called Oh Yes! It ruled SO hard and was in our town which was a mega bonus. We were scheduled to do a DJ set at Fat Controller after the festivities. So we made our way there after all the fun and music.. And after a Villi’s pie or two later.

We arrived just in time. We were dancing, singing along and having a killer time.
The room was truly electric as I played a bunch of Kylie Minogue and mid 2000’s dance music. After we finished, I went to catch an Uber home with my friend Sam but just as we were leaving, I went to grab my USB that was plugged into the DJ decks. The DJ was playing Bonkers by Dizzee Rascal and the room was lit.

I walked up with so much confidence and went to securely grab my 8GB 2.0 drive full of lovely MP3 files only to ACCIDENTALLY only slightly tap the actual DJ’s USB which stopped EVERYTHING. Bonkers stopped playing, instantly.

Everyone was confused. I felt sick in the stomach kind of guilty and didn’t understand what I had done. “I swear I didn’t even touch this guy’s USB??!” I said with much guilt. But the damage had been done. I ruined the entire drop to Dizzee Rascal’s classic 2009 hit and I was truly embarrassed.

SO I apologized profusely and fled the scene. As I was waiting for the Uber, I saw someone wearing a Heaps Good Friends shirt, so I naturally went “Hey man, I like your shirt!” With the sincerest intent in the world. Only for this gentleman to turn around and say, “F*** off dude”

To which I responded really confused with “Oh.. I.. I printed that shirt in my garage.. I play drums..” only to be cut off by all his friends who came out of nowhere, almost instantly with an ever so lovely phrased “Yeah whatever dick head.. F*** off”

So instead of catching the Uber home with Sam, I walked all the way home and it started raining when I was half way home.

Love, nature, and cartoons inspire me the most. They all make me feel the craziest feelings ever and connect me to my truest self. I’m usually really loud and love having as much fun in a single day as I possibly can. So all three combo together to bring me back down after I’ve been jumping around in space for a while.

Oh man, that’s way too tricky to decide! It’d have to depend what mood I’m in! Right now I wish I wrote Dive by Beach House. I heard it when I was on the bus yesterday and it instantly made me want to hug and kiss everyone because it makes me appreciate how weird and wonderful life really is. As humans, we all share 99% of the same DNA, so maybe if we hugged hard enough to this song we’d turn into one big pile of jelly and glisten underneath the sun and nothing would worry anyone anymore.

What’s next for Heaps Good Friends?

After our EP tour, we’re opening up a challenge to see if anyone is actually better than Emma at Tony Hawks. Last week we watched in amazement as she got a 150,000 point combo in one single turn and we want to invest all our spare time into a massive challenge. Then when we’re satisfied we’ll write more songs and have a big nap.

And finally – What’s your scene?

My scene is the second to last bit in The Incredibles where they find out Jack Jack has super powers and he goes real crazy.

Heaps Good Friends are stoked to hit the road for a national tour across March and April in support of their debut EP Hug Me. [pullquote]”There’s just no one doing what they do in Australian music at the moment” – Pilerats[/pullquote] 2017 was a massive year for the trio known for delivering lyrically playful, synth pop treats, including winning ‘Best New Artist’ at the South Australian Music Awards last year, single ‘Let’s Hug Longer’ was the 9th most played track on triple j and released the hilarious video for ‘I Could Eat a Full Packet of Yo Yos’, which was directed by them together with Aaron Schuppan and filmed in Adelaide’s beautiful heritage-listed Capri Cinema.

Grab your copy of the EP now @ www.heapsgoodfriends.com OR listen to it here: http://smarturl.it/hugmeep

Heaps Good Friends formed after Emma and Nick met at the old Gladstone Gaol in South Australia, where Nick recorded Emma’s first demo in the K wing. The latest addition of drummer Dan completes their set-up, and together they started to show Australia what they’ve got. Their stellar 2017 featured a national tour with The Jungle Giants, an impromptu BIGSOUND appearance and a coveted triple j Unearthed performance slot at the sold out fun fest that was this year’s Groovin’ the Moo.
More info:
heapsgoodfriends.com
https://www.facebook.com/heapsgoodfriends/
About Mary Boukouvalas 1483 Articles
Mary is a photographer and a writer, specialising in music. She runs Rocklust.com where she endeavours to capture the passion of music in her photos whether it's live music photography, promotional band photos or portraits. She has photographed The Rolling Stones, KISS, Iggy Pop, AC/DC, Patti Smith, Joe Strummer, PULP, The Cult, The Damned, The Cure, Ian Brown, Interpol, MUDHONEY, The MELVINS, The Living End, Foo Fighters, Smashing Pumpkins, Rage Against The Machine, The Stone Roses –just to name a few - in Australia, USA, Europe and the Middle East. Her work has been published in Beat magazine, Rolling Stone magazine, Triple J magazine, The Age Newspaper, The Herald Sun, The Australian, Neos Kosmos, blistering.com, theaureview.com, noise11.com, music-news.com. She has a permanent photographic exhibition at The Corner Hotel in Richmond, Victoria Australia.
Website Facebook Twitter YouTube

Tell us about your current tour? What keeps you coming back to Australia? It’s going so well so far! We’ve done Adelaide, Melbourne, Canberra and Doonside and they’ve all been so great, made some new […]

Heaps Good Friends are stoked to hit the road for a national tour across March and April in support of their debut EP Hug Me. [pullquote]”There’s just no one doing what they do in Australian music […]

Quirky cabaret bars that serve a mean G&T and boast a stellar cocktail list..which is why you’ll always find me returning to The Butterfly Club! I also love the buzz of a Fringe or Cabaret Festival, or a smart Opening Night. Any excuse for a dress up, really!
Amelia Ryan, Lady Liberty
Our scene is in the city of Bath, a small city with a very big musical identity, we play the British festivals and I am also in the ’choirs scene’. We are also in other bands for fun, music all the way, roll on summer!
Su Hart, Baka Beyond
It’s beards.
Nathaniel Beard, The Beards
All the wandering. The bastards and the angels. The sound of the rain and the pains of the heart. The silence. All the houses and all the rooms. All the keys and phones.
Raised By Eagles
My scene is finding any excuse to dance with my 2 year old daughter Ruby.
Matthew Hardy, Comedian
Aside from music and everything creative, I love open-mind people, unexpected humour, seeing the world and nature, riding my bicycle, playing billiards. I’m also a fan of coffee, whiskey and most things vintage.
Jessica Stuart Few
My scene is driving fast cars and shooting guns.
Ace Frehley
World/folk. Acoustic and proud of it!
Ilana Cravitz, The London Klezmer Quartet
Country roots, old time, bluegrass, folk, Americana scene Traditional plus :)
Whitetop Mountaineers
My scene is at the moment Big Wongs General Tsos Chicken as I get sauce on the keys typing to you :-)
Brian Mackey
Going to the river on sunny afternoons with the blow up dingys and resting your beers on lily pads.
The Frowning Clouds
Art is my scene. No labels, restrictions or judgement. I love art in all it’s varied glory.
The Last 5 Queers
It’s a delirium, really, but I like to live like this.
Hugo Race
Hiking a 14K foot mountain in Colorado
Cole Washburn
Scones, savory, sweet I don’t mind
The Wooden Sky
Cool venues with good beer on tap that don’t mind us getting loud and getting room grooving so hard you feel the floor shaking.
Papa G and The Starcats
Rock’n’Roll
About Heels on Decks
What’s my scene? well…
And another thing I’ve been wondering lately
Oh, baby,
Tell me where have you been?
Now the stage is set
Where’s my Juliet, baby?
Is it maybe
My Midsummer Night’s Dream?
What’s my scene?
Clowns
It’s Thonbury. It’s my dreaming. I’ve lived here 30 years and it’s evolved with me. The more I drink wine, the more wine bars appear in the neighbourhood. The more I eat, the more cafes appear in the neighbourhood. Fantastic.
Denise Scott, Comedian
Fuck the Fucking Scene question! xo
Fuck The Fitzroy Doom Scene
Our gigs have an air of danger and sex. Beautiful women are free to express themselves and are as dangerous as hell. Everybody can have a good time ’cos there’s a lot of love in the room and we just can’t help but stomp out that primeval swamp boogie ooze.
Chris Russell’s Chicken Walk
Our scene is this big gorgeous wide world we live in all its majestic splendour!
Kim Salmon, The Darling Downs
Wherever there is music is where I feel most at home
Toby Robinson
I love being on a little boat near home in South West Victoria with a fishing line in the water, the Sun coming up or going down. I also love walking the streets of Melbourne or Manhattan or many of the beautiful towns and villages of Ireland or anywhere. My partner and my family are central to it all. I also love being in the midst of a great music session, anywhere, anytime, being transported into the soul of the Universe.
Shane Howard
Anyone who welcomes a hairy, gold wearing, hot air blowing idiot to a dinner table is my scene.
Henry Wagons
My scene is Brunswick. I love it. It provides me with just about everything I need.
About Charlie Marshall
That’s a hard one, although I do love anything electronic with an indie-pop feel!
Franki
Deep 70s disco, wonky synths, shady lyrics, fairy lights and cheap wine.