This is really quick to make, and is great for afternoon tea.  It’s not massively big so will usually get eaten all at once.  I’ve been told it tastes better on the day of baking, but it’s rare we would have leftovers so can’t comment on that.  I’m sure it would keep well covered in cling film in the fridge.

1.  Heat oven to 180 degrees C.  Lightly spray a Swiss roll tray (40 x 30 cm) with cooking spray and line with baking paper.  Sift the flour and cinnamon together into a bowl.  Using electric beaters beat the eggs for at least one minute then slowly add the sugar.  Continue beating the egg mixture until it is very thick – it needs to leave a figure of 8 when you form one wit the mix on the beaters.  Don’t skip this step, if it’s not thick enough the sponge won’t rise.

2.  Mix the hot water, honey and melted butter together and carefully fold this into the egg mix with a metal spoon – if you like you can measure out and mix, then pop in the microwave for a few moments to blend together more easily.  Gently and thoroughly fold in the flour and cinnamon.

3.  Spread onto the tray.  The cake will look pretty thin, but that’s fine.  Be sure to go out to the edges, and try to make sure the cake is reasonably even.  Bake for 10 – 12 minutes or until the sponge is cooked and lightly golden.

4.  While the cake is cooking place an old tea towel on the bench (the thinner and more worn the better) and cover generously with sugar and a few shakes of cinnamon.  When the cake is cooked, remove from oven.  Flip the cake out onto the sugared tea towel, trying to get the long edge of the cake in line with the edge of the tea towel.  Peel off the baking paper, and if the edges look a bit crisp then trim them off.  Gently but confidently roll the sponge up in the tea towel – the tea towel will be in the middle of the sponge, where the filling will go.  Set aside and leave to cool completely.  If you try to fill it while the cake is still warm the cream will melt.

5.  While cake is cooling prepare the filling.   Whisk the cream until thick, and add the honey and cinnamon.  When the cake is cool, carefully unroll from the tea towel.  Don’t worry too much if the cake cracks a little.  Quickly fill with the cream mix, leaving a border of a few centimeters at the bottom end, as some of the cream will squish down as you roll it back up.  Gently roll back up, and place on a serving plate.  If you like you can dust it with more sugar and cinnamon, pipe with cream etc. 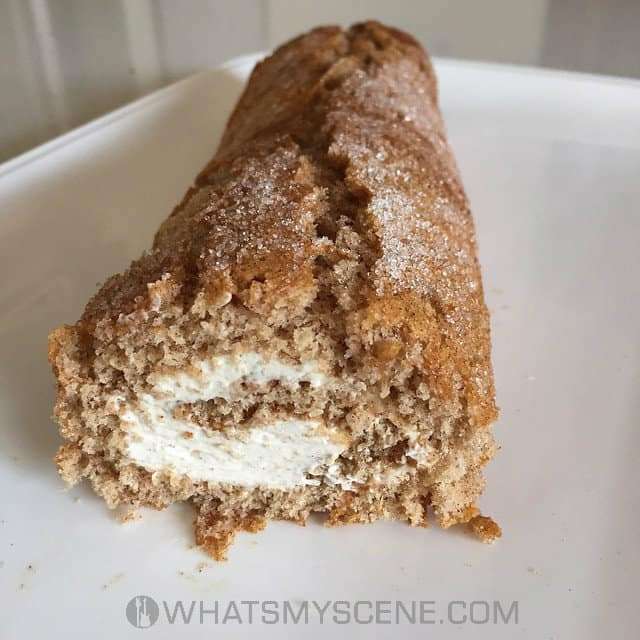 About Kate Delbridge 163 Articles
Kate works in local government as an occupational therapist but her heart is in the kitchen. When she’s not looking through cookbooks Kate gardens, reads, sees films, listens to music and catches up with mates. She loves cooking mainly because it gives her an excuse to eat.
Website Twitter

This cake is yum. I mean really yum. And so quick to make. Pretty much anyone who eats it wants the recipe. It’s adapted from an old Women’s Weekly recipe, and as we all know […]

We try to eat vego at least once a week, usually on Meatless Monday. However depending on whatever else is going on it often ends up being Meatless Wednesday or Thursday. This is the sort […]

This is one of my all time favourite recipes.  If I can’t think of what to make for dinner I know I just need to grab a couple of things at the supermarket and I […]

Tegan Voltaire, The Voltaire Twins
Act III, Scene VI of King Lear. A tense and gripping scene wherein the ageing king informs his three daughters that they have all been accepted as contestants on Family Feud.
Ben Pobjie, comedian
Fuck the Fucking Scene question! xo
Fuck The Fitzroy Doom Scene
Tunes, mates, and honesty. No dickhead policy!
Buddha In A Chocolate Box
My bedroom
Nantes
It’s a delirium, really, but I like to live like this.
Hugo Race
Our scene is this big gorgeous wide world we live in all its majestic splendour!
Kim Salmon, The Darling Downs
When I’m not working in the studio or doing shows I’m at home with my partner and our baby so I guess they are my scene.
Way of the Eagle
Cool small bars with good food, good wine, good company
The Backsliders
Local bands at sticky carpet venues. Vinyl. Social networking. Keeping healthy in order to play full throttle live sets. Loud rehearsals. Good people with creative ideas. PRIMITIVE ROCK.
Jon S Williams of City of Cool
Currently its the Yarra River Trail I’m walking along. Generally my scene would be Melbourne. Nothing feels or compares to home.
Simon McConnell, The Delta Riggs
I am a simple man. My scene is simple. I like playing metal and spending time with my family.
Waclaw ”Vogg” Kieltyka, Decapitated
I have no idea what my scene is; I have been listening to Dubstep and a bit of Drum N Bass. I found a lot of Hip Hop and RnB stuff is getting very interesting again it is pushing different sounds out. I’ve been really into cycling since the early ‘90s; racing mountain bikes and racing road bikes. So between cycling and music there is not much time left, a bit of sleep now and again.
Mike Edwards, Jesus Jones
My scene is driving fast cars and shooting guns.
Ace Frehley
What’s my scene? well…
And another thing I’ve been wondering lately
Oh, baby,
Tell me where have you been?
Now the stage is set
Where’s my Juliet, baby?
Is it maybe
My Midsummer Night’s Dream?
What’s my scene?
Clowns
I don’t wish to belong to any scene that would have me as a member (with thanks to Groucho Marx).
Bob Spencer, Raw Brit
Wherever there is music is where I feel most at home
Toby Robinson
I just do my best to live a life full of the things I love. Rock’n’roll, photography, New York City – they are three things right there that I love a lot!
Paul Miles
World/folk. Acoustic and proud of it!
Ilana Cravitz, The London Klezmer Quartet
If you’re a Max Chillington then you’re our scene.
Gunslingers
It’s Thonbury. It’s my dreaming. I’ve lived here 30 years and it’s evolved with me. The more I drink wine, the more wine bars appear in the neighbourhood. The more I eat, the more cafes appear in the neighbourhood. Fantastic.
Denise Scott, Comedian
I like the beach more than anything. The beach feels like home all year round. In terms of a scene…I actually prefer to hermit most of the time.
Abbe May
It’s beards.
Nathaniel Beard, The Beards
Flanelette pyjama pants.
Timberwolf
No set scene. We have played with a variety of bands from King Parrot to The Datsuns. Offer us a show and give us a try!
Los Hombres Del Diablo
My scene is a Punk-hardcore scene or an underground, minimal electronic scene, something grungy – where everyone is wearing black. That’s my vibe; don’t go out until 11 when all the other vampires come out and go home when the sun comes up at 7. Oh shit. Creatures of the night.
Greg Puciato, Killer Be Killed & Dillinger Escape Plan
Comedy, surreal show girls, burlesque and theatre
MC KREWD