Tell us about your new single/ album?

Nick – “I I Knew” is a song with a history – for a long time it served as a companion of sorts to “The Passenger” by Iggy Pop, then when we finally got around to recording our album it made a sharp turn into hi-energy Flying Nun label style pop thrash. The single potential was obvious. It’s got a seat of the pants feel, because we were flying by it!

Eliot – From the confines of our home iso bubble, I’ve been relying a lot on the calming presence of a landscape painting by my father in law and artist, Robert Bolton. It’s a serene blue over a patchwork of resplendent green and is always rewarding to look at.

Eliot – We are definitely a Pot Luck. When friends come around and everyone brings a unique, delicious dish – that’s probably us. Not easily categorized and a real blend of different influences!

Eliot – Before air travel become more affordable, we would cruise the east coast in a hire van and it was always a time to bond over our individual mix tapes. Either celebrate in unison when a song came on that we all loved, or make fun of each other’s bizarre musical oddities. The tour van is where you really become family.

Nick – I’m a drummer who never practices on his own, so my lifeline is the other people I play with and I’ve been blessed my whole time playing music professionally to play with those with immense talent.

Eliot – Very easily, the breadth and emotional landscape of Kate Bush’s discography. Her lyrics and melodies are like a lifeblood to my creative circuitry.
Which song do you wish you wrote?

Eliot – To momentarily depart from the never-ending source of inspiration that is Kate Bush, I would say The Headmaster Ritual by The Smiths. The chord changes and melodies go sideways in wonderful ways. And amazing bass playing.

What changes with your musical direction have you made due to the Covoid-19 restrictions?

Eliot – We were lucky to finish our upcoming album “You Don’t Have Time To Stay Lost” just before the pandemic hit us, so continuing to song write at home in solitude is no dramatic change of circumstance. What we miss is being able to be in a room together to bash that idea into shape with our array of different hammers.

Nick – “If I Knew” is only the very first taste of our album – we’re immensely proud and excited to be throwing it out into the world and we’ll be continuing to drip-feed tracks until it’s release later in the year. And obviously keeping an eye on restrictions lifting to a point we can get back together and start on the next one.

Eliot – A few close friends and some good stories that have you laughing until you can’t breathe. 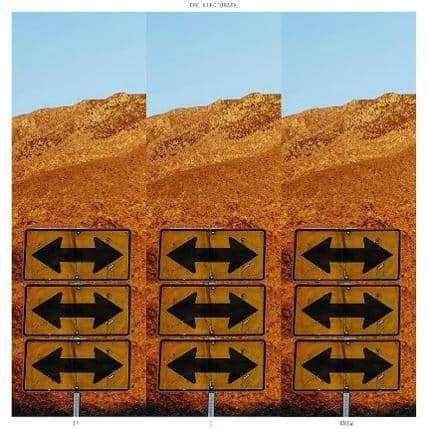 The Electorate are Eliot Fish, Nick Kennedy and Joshua Morris. “If I Knew” is the debut single from The Electorate,  released Friday 15th May and taken from their forthcoming LP “You Don’t Have Time To Stay Lost”, out soon on Templebear Records, and distributed by MGM. The album was recorded by Tim Kevin at his Tempe River Studios and mastered by JJ Golden in California.

Tim Kevin and Nick Kennedy had played alongside each other in Knievel, and his production work with Youth Group, Holly Throsby, Peabody, Toby Martin and Buddy Glass were well loved by the band. The Electorate started recording with Tim, and by the end of a weekend had the beds down for 10 songs; debut single “If I Knew”, would make it 11.

“If I Knew was the last song recorded for the album – something we’d waited a long time to do.” says Joshua. “We’d ripped the song apart the week before we recorded it, so it was still fresh, and frantic when we did. Each take got us closer to the song being right, but the end of the three of us recording our debut.  Do we keep getting it wrong so we can keep having fun?” he asked.

The lyrics reference Fugazi, Built To Spill, and two locations – a South Coast caravan and the Mexican city of Oaxaca, which feature in the video clip culled together from footage of a Mexican bus ride and some kids playing on the south coast of NSW.

The Electorate originally formed as school kids with a love of melody, contortion and the energy of skewed pop. They played as The Templebears, kicking around the traps and releasing EPs but as they prepared to record their debut, they splintered. The individual members went off to play in bands like Big Heavy Stuff, The Apartments, Knievel, Atticus, Reality Instructors, Imperial Broads. They re-assembled for a one off gig and got sucked back into the universe their songs had created, and set about recording the  album they were always meant to make.

Tell us about your Release ‘San Fran’ ? DAN: It’s a newbie that we have been eager to get out there for a while now; also our favorite song to play live. We recorded it […]

QUAILS is the solo project of Sydney based singer, songwriter, producer Amy Pes. From a background spanning indie/alternative through to being one third of electronic popsters Tokyo Denmark Sweden, Pes has collaborated with a number of […]

Glen Matlock’s scene is playing music. He’s on his way to Australia with Slim Jim Phantom (Stray Cats) to play for us. He says “I’m coming over – Monday, I’m flying out. Flying to Brisbane, […]

Tegan Voltaire, The Voltaire Twins
I have no idea what my scene is; I have been listening to Dubstep and a bit of Drum N Bass. I found a lot of Hip Hop and RnB stuff is getting very interesting again it is pushing different sounds out. I’ve been really into cycling since the early ‘90s; racing mountain bikes and racing road bikes. So between cycling and music there is not much time left, a bit of sleep now and again.
Mike Edwards, Jesus Jones
Leadfinger is a very strange band, hard to define, but we are free.
Stew, Leadfinger