James Bowers: I’d like to say the person we wrote this song about was not a convicted war criminal, but I just can’t.

[pullquote]Our newest single Oh Loretta! which we are currently promoting, and need to sell at least 58 copies of the 7 inch of in order to pay back our debt to this Swahili loan shark who has threatened to break our backs if we don’t cough up the $66.78 that he contributed to get it pressed. [/pullquote]Angus Leslie: Our new single is a bright little blue-eyed soul number called Oh Loretta! with dazzling horns, a 10 outta 10 groove and a caramelly lead vocal performance. Please buy it, we’re in a lot of trouble… Oh and come to the launch shows in June at Goodgod in Sydney and the Toff in Town in Melbourne! We have some new surprises for you… Also we’re seriously in a LOT of trouble..

A: I would describe our sound as a dull, stale 5 day old bowl of cornflakes, with a single cockroach skuttling across the top into the corner of the room, where it is pulverized by a sharp blade. Sorry, I think I may have just described the new sound on JJJ….

J: I’d really much rather describe it in terms of other types of music, as I feel that would paint a much clearer picture of what we sound like. I guess that’s not an option here. Ummm…. A Bahn Mi from Urbanspoon-acclaimed Vietnamese cafe ‘Mister Truong’s’.

Which song resonates most strongly and why?
J: Does this mean our song or just any song? I’ll go with any song. It is Rosanna by Toto. I think it’s the greatest song ever written. Full stop. If anyone disagrees my address is 11 Westbourne St Brunswick. You can come and fight me there.

A: If you mean our song then probably our newest single Oh Loretta! which we are currently promoting, and need to sell at least 58 copies of the 7 inch of in order to pay back our debt to this Swahili loan shark who has threatened to break our backs if we don’t cough up the $66.78 that he contributed to get it pressed. If you mean any song ever then the theme song to the old 90’s children’s show “What’s In The Box?” due to it’s lewd double meaning.

A: Around three band members tried to urinate out the window of the van on the way to Canberra from Sydney in freezing cold weather. None of us could muster the piss, as the weather had shrivelled our members beyond recognition.

J: Jesus… Ummmm….. Almost all of them are one-liners from our prodigious young guitarist, Louis King. One that springs to mind, and I won’t say which band member this was directed towards, is “He’d fuck a monkey if he thought he could get away with it”.

J: Really good music. Really well thought out things. How thin the nation of Chile looks on a map. Seriously, check it out. Thin as fuck..

A: First we tour this single Oh Loretta! in June, then back to the studio to polish off the rest of the Ready EP, which is part one in our upcoming Rough & Ready Double EP series.

J: Personally I’m going to have a shower, maybe work on some music. Might eat a Bahn Mi later. Probably a couple of beers tonight. That’s about it. And you???

A: A sordid S&M underground I am forced to watch James whip this hunky Nick Jonas-lookalike with an electrified cat o’nine tails for 72 hours at a time with my eyes forced open.

About Sex on Toast 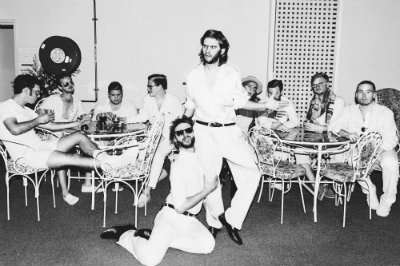 Since their last self titled studio effort, Sex on Toast have blazed around the nation with sold out shows in Melbourne and Sydney, and become festival favourites among crowds at: Falls Festival, St Kilda Festival, Melbourne Comedy Festival, Woodford Folk Festival and Adelaide Fringe Festival.

2015 is set to be another stellar year for the band, with the release of first instalment of the two part Rough/Ready EP series. ‘Oh Loretta!’ marks the first single from the Ready EP due for late 2015 release.

The Ready EP encapsulates what the band describes as ‘Ricky’, a tight packet of sublime studio musicianship and song-writing, harking back to the days of slick LA studio bands and sophisticated pop bravado, coupled with the energy and tenacity that make Sex on Toast undeniable.

Sex On Toast must be seen to believed, and for all the believers and unacquainted, they will be launching the single in Sydney at Good God Small Club with eccentric neo-soul legends the Venusians, and Afro-Party Kings, the Liberators. Joining them in Melbourne at The Toff In Town is local Soul Superstars The Cactus Channel and an extra special secret guest.

Tell us about your new single/ album/ tour? It’s so exciting to be putting out new music this early in 2017. ‘Hard as Diamonds’ is a bit more upbeat than my 2016 releases so it’s […]

Tell us about your new single release? Into the Dark is the first single from my EP Skeletons, It was recorded and produced with my mate Jordan Power in Byron Bay. This track was actually […]

Tell us about your new single/ album/ tour? We’ve just unleashed our new single Sharkitect. A tale of one’s grief gazing at a mother and baby’s relationship on a Melbourne train. Recorded at Legion Studios […]