Mountains of Gold is my first attempt at country music and by far the most enjoyable writing and recording experience I have had. Definitely my best (and my current favourite) work!

I was at the ABC studio this week doing an interview and some songs. Fanny Lumsden was in the next studio with her gorgeous baby Walt. I was trying my hardest to concentrate on the interview but I kept getting distracted by the Walt show. What a cutie pie he was! I actually forgot the words to my own song momentarily whilst I was watching everyone with the baby. I had to pop out in between songs to say hello.

There is a restaurant in Edinburgh called International Starters, which is exactly as it sounds – serving a whole bunch of starters/entrees from different cuisines. My music is a bit of this and that, small bites, not too filling and hopefully leaves you a little hungry for more!

The achievements of other people inspire me and chasing down the many things that are on my to-do list. That keeps the rocket under me to push on and keep moving towards my goals, even if only a little bit at a time.

At least once a week I hear a new song that I wish I wrote but from a practical perspective if I had written a Christmas carol like ‘White Christmas’ I could finance an excessive lifestyle for everyone I’ve ever met, as much music-making as I wanted and end world poverty off the royalties.

I am going to spend the next 6 months or so working on the release of Mountains of Gold and giving it as much of a life as possible.

Relaxing and laughing with friends and family at a restaurant somewhere exotic.

Mountains of Gold is available now via Buttercup Records Australia. 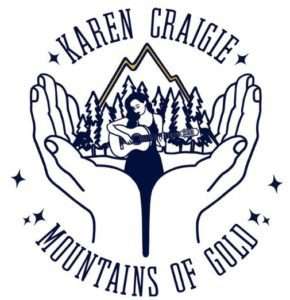 Originating from Sydney, international award-winning songwriter KAREN CRAIGIE has been writing, recording and singing since she was a child, releasing singles and albums under numerous monikers, writing and co-writing songs for her own catalogue and a number of other artists.  Her songs have featured in film and on TV (MTV Diary, Drew Carey’s Sporting Adventures, and Pickings), and she has also enjoyed airplay in the UK, Canada, New Zealand and here in Australia.  Karen’s music has also been licensed for airplay in retail outlets across most of Europe – including The Netherlands, Germany, France, Belgium and Switzerland as well as Spain, Ireland, the UK and into the United States.

November 30, 2018 saw Karen release her 3rd LP, but the first under her own name through Buttercup Records Australia.  Written and recorded at Love Hz Studios, Mountains of Gold is a powerful combination of cleverly crafted lyrics and heartfelt vocals, delivered with the signature polished production of Golden Guitar-winning producer, Matt Fell.  Each song on Mountains of Goldtells a unique story and draws on a range of influences spanning country, pop and rock music.

Lonely Town: the first single from the album, spent 7 weeks in the Country Songs Top 40 Australian airplay charts.  The song was written on a Greyhound bus ride through Nevada and was created as a homage to classic American western movies conjuring imagery of long setting suns, shoots ups, and whisky and incorporating country sounds from the fiddle to backing vocals that emulate the style of the singing of the first nations people of America.

It’s likely that you have never heard of Karen Craigie before; especially if you’re outside the orbit of the Australian Country Music scene. Karen spent years on the other side of the industry, including a stint at Drum Media, and working as Label Manager for Laughing Outlaw Records, working with a dizzying array of artists from the New Christs to Jason Walker.

Ever-careful not to blur the lines between her work and play, Craigie developed her musical career behind the scenes; focusing on songwriting, and totally bucking the traditional working musician path of live performance.  She explains: “When I first started releasing music I was working in the industry and I wanted to keep those two parts very separate. I am not a musician anyway, beyond playing enough to write the songs and get them ready for the studio. Songwriting and creating songs was then and has continued to be the part of music that I love most and want to be involved with. Over time that has allowed me to avoid the cycle that I have seen so many musicians wrestle with – work getting in the way of music getting in the way of work – and have a reasonably long-running career as a songwriter, alongside multiple professional paths, and a heap of other major personal projects. I plan to continue doing things this way for as long as it keeps working”.

In her other professional life Karen is what she calls a “professional do-gooder”- founding and running the Australian Charity –Prosper (Project Australia), chairing the boards and committees of multiple international organisations (Welcome To My Yard, Prosper Children’s Village) for street kids, leading the fundraising program for her son’s school, fostering more than 20 children over 6 years and being a mum to her 10 year old co-writer.

“Writing songs has been the best way that I can find to stay connected to music amidst all of my other passions and commitments. I am a songwriter and occasional artist and that is enough. Some performers don’t write songs and some songwriters don’t perform. I am in the latter category. That fits nicely with my home, and busy work life and lets me keep doing everything that I love. If I attempted to add performing or anything else, I’d have to let go of something else that’s important.”

It’s a very different approach to sustaining a musical career, but for Craigie at least, it works well.

Karen’s new album Mountains Of Gold is out now through Buttercup Records Australia.

The Cherry hit the stage first, and they hit it hard … a sound so chunky you could carve it. – 100% ROCK MAGAZINE   2016 saw US Hard Rock outfit BLACK STONE CHERRY release their […]

What’s your favourite work at this point in time? Luminaries II How would you describe your sound in food form and why?   Bitter dark chocolate eaten with a glass of full bodied red wine. Tell […]

Considered one of the finest modern blues guitarists in the world and a bonafide can’t-miss live performer, Gerard Allman Events are proud to announce that Kirk Fletcher will make a welcome return to Australia in February 2020 – and this time he’s bringing his European band – Jonny Henderson on Keys and Bass and Matt Brown on drums – with him. Tickets to all shows are on sale now, with full tour details below. […]

When I’m not working in the studio or doing shows I’m at home with my partner and our baby so I guess they are my scene.
Way of the Eagle
Obviously to create music. My family. I love driving my Ferraris.
Yngwie Malmsteen
Aside from music and everything creative, I love open-mind people, unexpected humour, seeing the world and nature, riding my bicycle, playing billiards. I’m also a fan of coffee, whiskey and most things vintage.
Jessica Stuart Few
No set scene. We have played with a variety of bands from King Parrot to The Datsuns. Offer us a show and give us a try!
Los Hombres Del Diablo
The beach. Tea with gin at your grandparents house. They have the best stories.
Betty & Oswald
The TV show “Full House
World Wild
My family, my friends, my home.
Cory Putman, Norma Jean
My scene is finding any excuse to dance with my 2 year old daughter Ruby.
Matthew Hardy, Comedian
My scene is driving fast cars and shooting guns.
Ace Frehley
I like to think that I belong to the head-strong Independent Music Scene – where we – musos and audience and everyone in between – all make gigs/tours, recordings, releases happen for ourselves and work our arses off to keep it going for the rest of our lives – all for the love of Music!
Florelie Escano
Tunes, mates, and honesty. No dickhead policy!
Buddha In A Chocolate Box
Deep 70s disco, wonky synths, shady lyrics, fairy lights and cheap wine.