Tell us about your new stand up show?

Ash Burgess : Punk Rock Poet is an amalgam of everything I have ever done over my career. I started writing poetry as I turned 30 a few years back and wanted to be taken seriously. I saw poetry as an excellent way to get people to do that. As  I wrote them I found it hard to not throw a few gags in there, and they became a little more whimsical than serious. I ended up having a few pints at a pub which had an open mic night about a year back, and they convinced me (read ; got me drunk enough) to get up and read. The poems got a better response than I could have expected, and I thought maybe there was something in it. Fast forward a year and I have been doing regular readings, writing a lot of poems, a few songs, a few jokes and wrapped it up into a show. Don’t expect a poetry reading, don’t expect a stand up show, expect both, but neither.

How would you describe your act in food form and why?

I definitely wouldn’t describe my act as a four and a half hour journey of imagination, reminiscence and wonder, but thats because I am not a flog charging $525 a slug for a feed. I’d describe it a variant chicken parma. You know when you go to a pub and the bloke in the kitchen is getting a little fancy, and he makes a mexican parma or something? That’s me. I love a parma because it’s impossible to screw up. Having toured every road of this country and seen a lot of counter meals, thats important. I’d like to live up to a parma, but with something a little bit different. Mexican Parma. Yep.

Which sketch/ joke resonates most strongly with you and why?

If it doesn’t have to be one of mine, it would be Bill Hicks’ routine on non-smokers. That changed my outlook on life. It’s okay to do shit that everyone says is not okay? Cheers Bill, I hadn’t figured that out at 14.  If it’s one of mine, I do a poem called “The Voice of Australia”, which is actually the first one I ever wrote. It’s about reality TV, and as an actor I feel violently against the trend in entertainment toward reality or “unscripted programming”.

Plenty. None of them related to this show, as it’s a premiere for the MICF. I toured with children’s theatre for years, and with bands before that. My favorite from my band days is from when I played bass in a band called Hedy’s Lament. We had played a show in Sydney the night before (which Jay from Frenzal turned up to and drank longnecks all night) and were driving back to Melbourne. For some reason, the drummer and I tried to remember all the names from the twelfth man’s role call of Sri Lankan cricketers, but were so drunk, we got stuck on “I love dahoodoogurusinger”. The singer from our band, who was driving, almost left us in every town we went through as we were saying it flat out from Yass, and found it hilarious. Anyway, we played a show the next friday night at what is now The Workers Club (Scottish Chief’s back then I think), and the drummer is gesturing feverishly to me. Dave Faulkner was in the front row. We have no idea why, and never spoke to him, but for a moment I believed in a higher being.  (I’m not even making that up for the benefit of this site and its name, that actually happened)

Inspiration is a funny thing. I have learned after many years to not force it, and it comes at any time. Just this morning I picked up a newspaper and wrote a poem based on what I saw. My rule is, that I put all else aside and write down the goddamn joke, because no matter how hilarious you think it is, it will never, ever come back to you later the same way. For this show, I have tried to write about things that are current like Tony Abbott, Game of Thrones, and Tinder.

I have no idea what is next! All going well, a show for the Fringe building on what I figure out works from this show. I’d also like to get caught doing something hilarious unexpectedly and be the subject of a meme or vine or something.

My scene is most definitely the Presidents speech from Independence Day. Anyone who is not moved to chills or fist pumping when Pullan asserts “we will not go quietly into the night” is dead. As for a social scenes, put me in a bar with beer on tap, gig posters on the walls, and carpet so sticky that you just step out of your shoes at the end of the night and leave them stuck to the floor. In second place comes any place where guys can wear thongs aswell as girls. I was refused entry to The Carlton Club because of my thongs, and stood there embarrassed while girls walked by in thongs without a second glance from the bouncers. I’ll never understand that shit. My scene is a place where everyone is welcome. 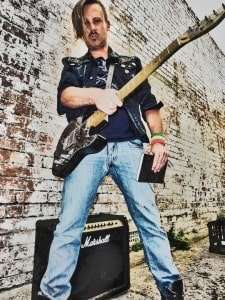 ASH BURGESS : PUNK ROCK POET is a premiere for this year’s Melbourne International Comedy Festival, featuring Ashley Weidner as the titular poet. Using his unique blend of slam poetry, music and stand up comedy, ASH BURGESS takes aim at everything from Game of Thrones to public sex, and everything in between. Widely known and mildly respected in barrooms and on street corners across Melbourne, ASH BURGESS is ready to take on the Melbourne international Comedy Festival. Ashley Weidner has been performing around Australia in theatre productions, comedy clubs and bars for two decades now, and is currently performing on stage at Witches in Britches as a frontline comedic performer. “ASH BURGESS will iambic your pentameter” “It was like watching a rock concert, except ASH can’t play any instruments”  

“Don’t give up your day job,” is a saying often bandied about around creative types. Comedians have been known to hold down a day job or two when building up their careers in comedy. David Quirk […]

Q&A with Belinda Campbell (wit incorporated Artistic Director) Tell us about your new play, Fairy Tale News? Fairy Tale News is a brand new Australian comedy, that takes some of our favourite children’s storybook characters and […]

Tegan Voltaire, The Voltaire Twins
I don’t wish to belong to any scene that would have me as a member (with thanks to Groucho Marx).
Bob Spencer, Raw Brit
Hiking a 14K foot mountain in Colorado
Cole Washburn
Local bands at sticky carpet venues. Vinyl. Social networking. Keeping healthy in order to play full throttle live sets. Loud rehearsals. Good people with creative ideas. PRIMITIVE ROCK.
Jon S Williams of City of Cool
Tunes, mates, and honesty. No dickhead policy!
Buddha In A Chocolate Box
What’s my scene? well…
And another thing I’ve been wondering lately
Oh, baby,
Tell me where have you been?
Now the stage is set
Where’s my Juliet, baby?
Is it maybe
My Midsummer Night’s Dream?
What’s my scene?
Clowns
Flanelette pyjama pants.
Timberwolf
Aside from music and everything creative, I love open-mind people, unexpected humour, seeing the world and nature, riding my bicycle, playing billiards. I’m also a fan of coffee, whiskey and most things vintage.
Jessica Stuart Few
It’s a delirium, really, but I like to live like this.
Hugo Race
Scones, savory, sweet I don’t mind
The Wooden Sky
Well I’m still looking for my scene, and I think I might have found it. Between the pages of What’s My Scene Magazine.
Dave Faulkner, Hoodoo Gurus
If you’re a Max Chillington then you’re our scene.
Gunslingers
Bed. Pringles. Whisky. Attenborough doco. Wham.
Marlon Williams
I’m in with the Out-Crowd
Dave Warner
The car wash scene from Cool Hand Luke will do just fine thank you.
Old Gray Mule
Sitting in the sun, in a nice chair, with a good book.
James Reyne
My scene is driving fast cars and shooting guns.
Ace Frehley
I like to be out in the nature, to get away. Go to the woods. My dad lives in the woods. Maybe once or twice a year I don’t have phone reception there is no Wi-Fi
Fredrik Åkesson, Opeth
Fuck the Fucking Scene question! xo
Fuck The Fitzroy Doom Scene
Our scene is this big gorgeous wide world we live in all its majestic splendour!
Kim Salmon, The Darling Downs
The dog park’s pretty good. I have a couple of miniature pinchers. And they’re the loves of my life. I take them for walks to the dog park; I’ve got a Harley Davidson I ride around. It’s not too exciting. It used to be sex, drugs and rock n roll; now I walk my dogs.
Stan Lee, The Dickies
It’s Thonbury. It’s my dreaming. I’ve lived here 30 years and it’s evolved with me. The more I drink wine, the more wine bars appear in the neighbourhood. The more I eat, the more cafes appear in the neighbourhood. Fantastic.
Denise Scott, Comedian
Leadfinger is a very strange band, hard to define, but we are free.
Stew, Leadfinger
I have no idea what my scene is; I have been listening to Dubstep and a bit of Drum N Bass. I found a lot of Hip Hop and RnB stuff is getting very interesting again it is pushing different sounds out. I’ve been really into cycling since the early ‘90s; racing mountain bikes and racing road bikes. So between cycling and music there is not much time left, a bit of sleep now and again.
Mike Edwards, Jesus Jones
Comedy, surreal show girls, burlesque and theatre
MC KREWD
Quirky cabaret bars that serve a mean G&T and boast a stellar cocktail list..which is why you’ll always find me returning to The Butterfly Club! I also love the buzz of a Fringe or Cabaret Festival, or a smart Opening Night. Any excuse for a dress up, really!
Amelia Ryan, Lady Liberty
My bedroom
Nantes
My scene is finding any excuse to dance with my 2 year old daughter Ruby.
Matthew Hardy, Comedian