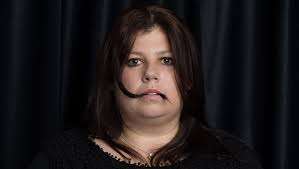 South African born, New Zealand resident Urzila Carlson has a heart as big as her girth, which unashamedly she explains is because she loves pies. In her one hour stand-up show Poise Control she discusses our blunt honesty and curiosity as children, which we need to have more of as adults, rather than be poised and controlled to deal with anger and assholes in our daily lives, oh and shit coffee, road rage, a bigoted midwife and those fucking car stickers.

Carlson explains the four different paths we can choose to take in our lives, all beginning with the letter H. Carlson’s story about dealing with retailer Hippies in the Hippy Path is particularly funny and sees the rowdy Saturday night crowd roaring with laughter. Instead of political correctness, Carlson encourages us to push back, to speak up for ourselves instead of getting angry and accepting the lava hot coffee we can’t possibly drink, and also to engage with each other more. The Hipster look sported by many guys right now, particularly by baristas is also discussed, and the night is peppered with material inciting belly laughs and stories we can all relate to.

Urzila Carlson is an entertaining, and hilarious performer, using experiences in her life for comedy fodder, and is well worth a look. See her before her shows sell out and the comedy festival ends this Sunday April 19th.

Matthew Hardy is a career comedian. He was the first Australian comic to establish himself on the UK’s super-creative, lucrative London live comedy scene. Hardy has appeared on Spicks & Specks, Good News Week, and is […]

Tell us about your new tour? Right now I am experiencing Melbourne, its lovely people, its beautiful and interesting architecture, the glorious food and the magnificent vibe that permeates the city while I try to […]

Tunes, mates, and honesty. No dickhead policy!
Buddha In A Chocolate Box
Wherever there is music is where I feel most at home
Toby Robinson

My scene is driving fast cars and shooting guns.
Ace Frehley
I like to think that I belong to the head-strong Independent Music Scene – where we – musos and audience and everyone in between – all make gigs/tours, recordings, releases happen for ourselves and work our arses off to keep it going for the rest of our lives – all for the love of Music!
Florelie Escano
Leadfinger is a very strange band, hard to define, but we are free.
Stew, Leadfinger
What’s my scene? well…
And another thing I’ve been wondering lately
Oh, baby,
Tell me where have you been?
Now the stage is set
Where’s my Juliet, baby?
Is it maybe
My Midsummer Night’s Dream?
What’s my scene?
Clowns

I love being on a little boat near home in South West Victoria with a fishing line in the water, the Sun coming up or going down. I also love walking the streets of Melbourne or Manhattan or many of the beautiful towns and villages of Ireland or anywhere. My partner and my family are central to it all. I also love being in the midst of a great music session, anywhere, anytime, being transported into the soul of the Universe.
Shane Howard
My scene is at the moment Big Wongs General Tsos Chicken as I get sauce on the keys typing to you :-)
Brian Mackey

Right now it’s a room with no lights on. An unmade bed. A laptop with 9% battery and a mosquito that just refuses to die.
Dave Larkin, Dallas Crane
Ep. 1 Series 3 of BBC’s ’Sherlock’ where Sherlock bungee jumps through a window and kisses Molly Hooper.
Miss Adelaide Everheart from Early Burley Burlesque

Well I’m still looking for my scene, and I think I might have found it. Between the pages of What’s My Scene Magazine.
Dave Faulkner, Hoodoo Gurus
I think my style is more just making cameos in everyone else’s scene.
Mojo Juju

When I’m not working in the studio or doing shows I’m at home with my partner and our baby so I guess they are my scene.
Way of the Eagle