Each batch of jelly:

Dissolve jelly in boiling water, then stir in cold water and vodka.

Set first layer, and then leave to set.

When first layer is set, add second layer on top.

Top with crushed blue ice for colour affect or finish with whipped cream. 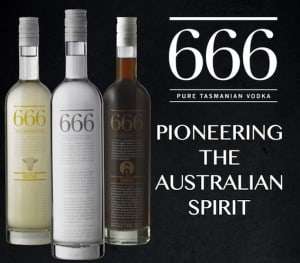 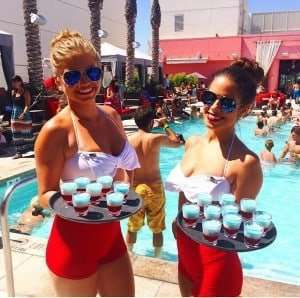 About Mary Boukouvalas 1299 Articles
Mary is a photographer and a writer, specialising in music. She runs Rocklust.com where she endeavours to capture the passion of music in her photos whether it's live music photography, promotional band photos or portraits. She has photographed The Rolling Stones, KISS, Iggy Pop, AC/DC, Patti Smith, Joe Strummer, PULP, The Cult, The Damned, The Cure, Ian Brown, Interpol, MUDHONEY, The MELVINS, The Living End, Foo Fighters, Smashing Pumpkins, Rage Against The Machine, The Stone Roses –just to name a few - in Australia, USA, Europe and the Middle East. Her work has been published in Beat magazine, Rolling Stone magazine, Triple J magazine, The Age Newspaper, The Herald Sun, The Australian, Neos Kosmos, blistering.com, theaureview.com, noise11.com, music-news.com. She has a permanent photographic exhibition at The Corner Hotel in Richmond, Victoria Australia.
Website Facebook Twitter YouTube

This is a great drink for any time of day. You can have it at brunch with bacon and eggs, in the afternoon or late at night. There are so many different recipes for this […]

Nowadays, with ease we “Google” a cocktail recipe, but lose the pleasure in the tactile search and find. In search of an appropriate Queen’s Birthday holiday cocktail, I enjoyed rifling through Jane Rocca’s Cocktail books, attempting to find […]

My scene is driving fast cars and shooting guns.
Ace Frehley
Going to the river on sunny afternoons with the blow up dingys and resting your beers on lily pads.
The Frowning Clouds
I don’t wish to belong to any scene that would have me as a member (with thanks to Groucho Marx).
Bob Spencer, Raw Brit

I’m in with the Out-Crowd
Dave Warner
World/folk. Acoustic and proud of it!
Ilana Cravitz, The London Klezmer Quartet

The car wash scene from Cool Hand Luke will do just fine thank you.
Old Gray Mule
Currently, I’m completely enveloped by writing my book; trying to complete the manuscript for my tome.
Jeff Duff

Cool small bars with good food, good wine, good company
The Backsliders
Currently its the Yarra River Trail I’m walking along. Generally my scene would be Melbourne. Nothing feels or compares to home.
Simon McConnell, The Delta Riggs
I like to be out in the nature, to get away. Go to the woods. My dad lives in the woods. Maybe once or twice a year I don’t have phone reception there is no Wi-Fi
Fredrik Åkesson, Opeth

When I’m not working in the studio or doing shows I’m at home with my partner and our baby so I guess they are my scene.
Way of the Eagle
Country roots, old time, bluegrass, folk, Americana scene Traditional plus :)
Whitetop Mountaineers

Well I’m still looking for my scene, and I think I might have found it. Between the pages of What’s My Scene Magazine.
Dave Faulkner, Hoodoo Gurus
I like the beach more than anything. The beach feels like home all year round. In terms of a scene…I actually prefer to hermit most of the time.
Abbe May