Yes, you read it correctly. Thrash metal vocalist, Schmier, loves cocktails. In our chat last night, Schmier stated that in Germany, “we have a big wave of cocktails with gin nowadays”.

Schmier’s favourite one at the moment is: “Gin, lemon, a little bit of lemonade, then you put some ginger in also and some rosemary, a bit of rosemary. And you make it round, you put a touch of caramel. A touch of caramel, then you have this spicy ginger, caramelly sweetness and then the freshness also of the little rosemary in there, amazing.”

On their upcoming tour don’t be too surprised to see Schmier behind the bar making us a cocktail or five. “I will do it no problem,” he states. “I’m a very good bartender. I used to have my own restaurant for many years so I’m experienced.”

However, I am positive that most Destruction fans would simply prefer him to be onstage.

Catch Schmier, with Destruction, on their upcoming tour: 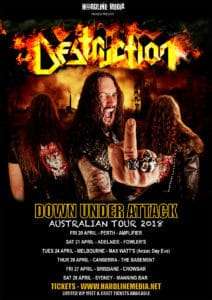 German thrash veterans DESTRUCTION return to Australia for a 2018 tour next month in support of their latest album Under Attack.

The band, which now consists of Schmier, Mike Sifringer and Wawrzyniec ‘Vaaver’ Dramowicz, will be destroying venues in Perth, Adelaide, Melbourne, Canberra, Sydney and Brisbane in April next year, backed by their 14-album discography.

About Mary Boukouvalas 1400 Articles
Mary is a photographer and a writer, specialising in music. She runs Rocklust.com where she endeavours to capture the passion of music in her photos whether it's live music photography, promotional band photos or portraits. She has photographed The Rolling Stones, KISS, Iggy Pop, AC/DC, Patti Smith, Joe Strummer, PULP, The Cult, The Damned, The Cure, Ian Brown, Interpol, MUDHONEY, The MELVINS, The Living End, Foo Fighters, Smashing Pumpkins, Rage Against The Machine, The Stone Roses –just to name a few - in Australia, USA, Europe and the Middle East. Her work has been published in Beat magazine, Rolling Stone magazine, Triple J magazine, The Age Newspaper, The Herald Sun, The Australian, Neos Kosmos, blistering.com, theaureview.com, noise11.com, music-news.com. She has a permanent photographic exhibition at The Corner Hotel in Richmond, Victoria Australia.
Website Facebook Twitter YouTube

Flanelette pyjama pants.
Timberwolf
Going to the river on sunny afternoons with the blow up dingys and resting your beers on lily pads.
The Frowning Clouds
My scene is finding any excuse to dance with my 2 year old daughter Ruby.
Matthew Hardy, Comedian

I’m in with the Out-Crowd
Dave Warner
I like to think that I belong to the head-strong Independent Music Scene – where we – musos and audience and everyone in between – all make gigs/tours, recordings, releases happen for ourselves and work our arses off to keep it going for the rest of our lives – all for the love of Music!
Florelie Escano
Ep. 1 Series 3 of BBC’s ’Sherlock’ where Sherlock bungee jumps through a window and kisses Molly Hooper.
Miss Adelaide Everheart from Early Burley Burlesque

Right now it’s a room with no lights on. An unmade bed. A laptop with 9% battery and a mosquito that just refuses to die.
Dave Larkin, Dallas Crane
Yass KFC
Simon, Loon Lake

Tunes, mates, and honesty. No dickhead policy!
Buddha In A Chocolate Box
Well I’m still looking for my scene, and I think I might have found it. Between the pages of What’s My Scene Magazine.
Dave Faulkner, Hoodoo Gurus
Leadfinger is a very strange band, hard to define, but we are free.
Stew, Leadfinger
Well these days my scene tends to revolve around my computer and being nudged by my dog to take her out for a walk. And then having my wife shout at me for spending time on my computer. I’m loving it actually. I’m quite relishing that scene. I miss them both very much.
Peter Hook, Joy Division/New Order/The Light

The car wash scene from Cool Hand Luke will do just fine thank you.
Old Gray Mule
I think my style is more just making cameos in everyone else’s scene.
Mojo Juju

Currently its the Yarra River Trail I’m walking along. Generally my scene would be Melbourne. Nothing feels or compares to home.
Simon McConnell, The Delta Riggs
Melbourne. Nowhere else is as great as Melbourne.
Brat Farrar

I love being on a little boat near home in South West Victoria with a fishing line in the water, the Sun coming up or going down. I also love walking the streets of Melbourne or Manhattan or many of the beautiful towns and villages of Ireland or anywhere. My partner and my family are central to it all. I also love being in the midst of a great music session, anywhere, anytime, being transported into the soul of the Universe.
Shane Howard
No set scene. We have played with a variety of bands from King Parrot to The Datsuns. Offer us a show and give us a try!
Los Hombres Del Diablo