It’s clear from the thick British accents in the crowd that there is a huge contingent of expats packed into the confines of 170 Russell, nostalgic for Ocean Colour Scene; a band playing  in Melbourne for the second time in its 28 year history.

Opener and signature  OCS tune off acclaimed 1996 album Moseley Shoals, “The Riverboat Song” incites a loud sing along that continues throughout the duration of the show. Blokes are punching the air with their fists, and pointing at frontman Simon Fowler in time with the music. Fowler’s vocals are as powerful and soulful as ever, Steve Cradock’s  impressive guitar licks punctuate each song, whilst powerhouse drummer Oscar Harrison, and cool bassist Raymond Meade provide a solid bottom end.

Songs “The Circle” and  “Lining Your Pockets” (about greed) are almost drowned out by the throng, with Fowler letting the fans shout out the chorus, as they replicate every line.

“By the way nice one on the yes vote folks” quips Fowler in husky drawl. “I’ve got my dress in my flight case, alright?” In fact there’s a lot of  love for the band in the house, with dudes in the front removing their shirts and throwing them onto the stage in a display of masculine solidarity.  The bromance is palpable. Who would’ve thought Britpop could stir such unbridled passion ?

“One for the Road” is dedicated to the late George Young (Easybeats) and the frenetic “100 Mile High City” is one of many highlights during the show.  An acoustic “Robin Hood” provides respite during the encore, and then things are turned up a notch during OSC’s homage to the Beatles “The Day we Caught the Train” and the crowd erupts. More clothing is shed, an intense sing along ensues and the throng is whipped into a searing crescendo. It doesn’t get any better than this. 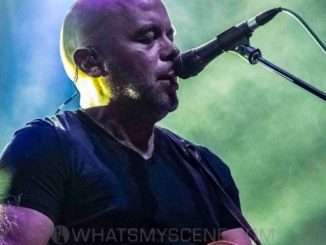