After playing the Sydney Opera House the night before, tonight’s atmospheric performance in front of a sold-out crowd of 900 fans also lived up to its promise of being a deeply emotional, yet exhilarating experience, and a unique concert experience by one of the best bands on the planet. Their set of 11 long songs incorporated a variety of progressive, folk, blues, classical and jazz styles, with everything from beautiful acoustic guitar passages to death metal growling.

About Paul Miles 142 Articles
Paul Miles is a rock photographer specializing in live music photography, who captures the true spirit of rock’n’roll in action by many of the world’s greatest performers. Over the years, he has shot a vast array of rock music photography: from gigs in world-famous clubs like the Apollo in Harlem and the Whisky a Go Go in Hollywood, to iconic arenas like New York City’s Madison Square Garden and Australia’s MCG, as well as in retail stores Barnes & Noble, Apple, and John Varvatos CBGBs.
Contact: Website Twitter 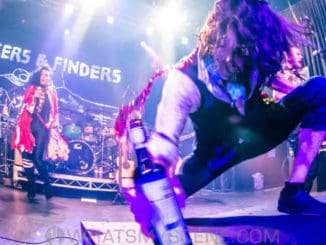