When I wrote Greenhouse, I had no idea what it was about. I was just mucking around with some chords in a dark room and speaking nonsense to myself. It wasn’t till years after that I realised that I had spoken directly with the trauma centred part of my brain (hippocampus? Amygdala? Idk) and accidentally verbalised the root cause of my anxiety. Greenhouse engages with the sense of comfort we derive from our protective mechanisms, even if we would be better off without them.

Picture a trifle – it’s a classic food evocative of another time. It’s layered af; you think the top of it is sweet and fluffy and then it keeps getting denser and richer the more you get into it. Wow so meta.

There’s a song on my upcoming EP called Enough – it’s contrastingly acoustic and simple compared to the bells and whistles of my other tracks. It’s very raw and painfully honest, and I think it will resonate with a lot of people.

Look, it’s always gonna be centred around drive-thru Maccas. I like to have it before the show, and then after the show driving home. I always end my set saying “Thanks for coming, I’m gonna go have [insert Maccas item here].”

I think inspiration will always come from a conversation between the external world and the internal world, in other words, the emotions that the events in my life stir within me. This isn’t always the case though. One time, my uni professor dared me to write a song about a slice of cheese, so I did. I draw inspo from cheese.

All I Really Want – Alanis Morrissette

Finishing and releasing my EP, and then jumping straight onto the next one! However we’re in the midst of Covid, so what’s next for me is to play the Sims and then probably compulsively shop online.

A meadow filled with thousands of frolicking golden retrievers. I am wearing a big pink ball gown. There’s a picnic set up with fancy cocktails. The temperature is a comfortable 27 degrees. Everything is good. 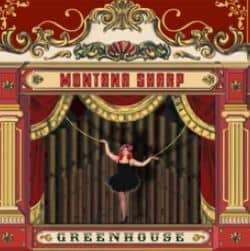 Mysterious newcomer Montana Sharp has today announced her breathtaking debut single Greenhouse, a theatrical pop ballad about the lengths humans will go to protect themselves, even if it ends up hurting even more in the long run, out now.  It’s a fascinating song and a wild debut – one which is accompanied by a showstopping film clip, directed by Majella Productions (Mo’Ju, Ecca Vandal, Birdz).  The clip sees Montana riding around on an endless carousel, cloaked in luscious red and gold, and watched on by spectators.

Greenhouse feels ready-made for a Eurovision campaign – definitely one for fans of Montaigne, Kate Miller-Heidke, Dresden Dolls, even Radiohead fanatics will find something to love here.  Montana Sharp successfully meshes fantastical, theatrical influences with modern, innovative pop sensibilities on Greenhouse; glorious piano marches valiantly alongside epic strings and the orchestral percussion arrangement, while Montana Sharp’s flawless, expressive vocal is the undeniable star of the show.  Speaking on the inspiration behind the song, Montana shares, “The metaphorical ‘greenhouse’ was once a fantastical sanctuary to seek refuge from the outside, but now it is safe outside and the protagonist is locked inside a madhouse.  I wrote this song at a very disturbed point in my life, engaging in a conversation with those self-protective mechanisms – but the song takes on a whole new meaning in 2020 with the coronavirus.  We’re all retreating to our ‘greenhouses’ to keep safe from the outside – but now we’re stuck inside!”

A song like Greenhouse demands a bold, larger-than-life visual representation – suffice to say, the Greenhouse film clip is nothing short of spectacular.  A gorgeous palette of circus reds and theatre golds characterise the setting while we observe Montana going around and around on her own personal carousel.  Up and down, up and down, the cyclical motion reminds the viewer of the nature of obsessive thoughts, and how easy it is to become stuck in them.  In short, this film clip is a must-watch.  Reflecting on the meaning of the clip, Montana Sharp says, “The protagonist is chained to the carousel while onlookers gaze in awe, ride and dance on the carousel, and then are ultimately free to leave.  The protagonist wakes up and discovers she is also free to leave, but finds herself unable to – she’s stuck on the carousel.”

After watching this clip and hearing this brilliant song for the first time, you may be wondering, where on Earth did Montana Sharp come from? With a background in classical piano since early childhood and studying pop voice at Monash University, this highly trained, highly skilled musician has managed to marry complex chord structures and motifs found in classical music with modern pop songwriting conventions – and the result is incredibly captivating, catchy music.  Greenhouse is just the beginning – there’s so much more to come from the mysterious Montana Sharp.

GREENHOUSE is out now!

NYC-based English troubadour Coyle Girelli is back with a breathtaking new single Here Comes My Baby, a song filled with sweet longing amidst a strange and confusing world. […]

Leading up to the Melbourne Guitar Show, What’s My Scene will be celebrating GUITARISTS. Stay tuned for our exclusive Q&As, Vintage Guitar Scenes, Snap Scene features, and much much more. Phil Manning​ answers our questions:  How long […]

How did you start out in music? Ever since a young age I always found myself fidgeting and tapping things. It wasn’t long before I realized drums were the perfect instrument for me. I would […]

Tegan Voltaire, The Voltaire Twins
I am a simple man. My scene is simple. I like playing metal and spending time with my family.
Waclaw ”Vogg” Kieltyka, Decapitated
If you’re a Max Chillington then you’re our scene.
Gunslingers
I like the beach more than anything. The beach feels like home all year round. In terms of a scene…I actually prefer to hermit most of the time.
Abbe May
Going to the river on sunny afternoons with the blow up dingys and resting your beers on lily pads.
The Frowning Clouds
I’m in with the Out-Crowd
Dave Warner
Country roots, old time, bluegrass, folk, Americana scene Traditional plus :)
Whitetop Mountaineers
Right now it’s a room with no lights on. An unmade bed. A laptop with 9% battery and a mosquito that just refuses to die.
Dave Larkin, Dallas Crane
I think my style is more just making cameos in everyone else’s scene.
Mojo Juju
I have no idea what my scene is; I have been listening to Dubstep and a bit of Drum N Bass. I found a lot of Hip Hop and RnB stuff is getting very interesting again it is pushing different sounds out. I’ve been really into cycling since the early ‘90s; racing mountain bikes and racing road bikes. So between cycling and music there is not much time left, a bit of sleep now and again.
Mike Edwards, Jesus Jones