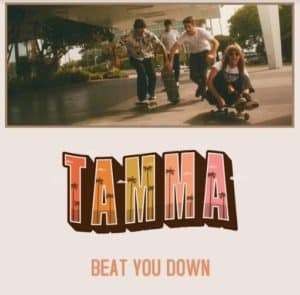 Beat You Down was written in the cottage in the Bush in Victoria, I wanted to write an upbeat summer jam that people could blast in the sun and feel uplifted. I wrote the track for my family after we faced a tradegy in 2016, the kind of pain and grief we have been facing is indescribable and the only way I could get through it was write music. I wanted to write a track for them and anyone as a message to remind them that life throws things at us that turn things upside down and that keeping things in perspective and not letting the things that waste your time and energy get you down.

I am currently working on second and third singles for release in the new year, this will follow with a tour in 2019.

Hmmm that’s a hard one maybe a fruit platter full of berries, cherries, mangoes and pinapples on a hot summers day!

Probably Brave, it’s a song I wrote in a house truck in Torquay after losing my nephew Buddy. I realised I couldn’t expect another person to pull me through the pain and grief that I felt in my heart, I had to do that myself and that’s what Brave is about.

My Dad taught me how to pull a Chevy engine to bits and rebuild it.

I’m currently working on my second and third single which is busy but exciting, I’ll be releasing those followed by a tour in the new year.

Surrounded by music and good people, live a life that has purpose and meaning, think outside of the norm, try new things and chase the life you wanna live and don’t be a dickhead.

One of Australia’s most exciting pop newcomers, TAMMA, has today announced her glistening new single Beat You Down.  After a rough few years of loss and devastation for TAMMA, real name Tammy Martin, and her family, Beat You Down feels like a true triumph over hardship.  TAMMA has also announced a happy-go-lucky video to accompany Beat You Down, directed by Damien Blue (Slow Pulp) and filmed at the iconic Venice Beach in Los Angeles, California.

Beat You Down is the ultimate pump-up song – one to bust out in the car as you head away on a road trip, when someone in your life is being a total jerk, when you are on your last dollar and your landlord kicks you out – but it’s more than that.  Sparkling guitars, hard-hitting pop percussion and a killer vocal hook from TAMMA lead the way – but the reason Beat You Down hits so hard is its deep roots in vulnerability.  TAMMA offers insight into the deeply personal inspiration behind the track, saying, “As I was writing Beat You Down, I thought about my family and the hard stuff we have faced in recent years.  I’ve had vocal surgery twice – however, losing my voice and identity seemed trivial after the tragic and sudden loss of my nephew Buddy in 2016.  The loss threw me into an unknown and scary place, as I realised how quickly life can change and turn on you.  Suddenly my main priority in life was to get my sister, family and myself through the grief and confusion.”

TAMMA continues, “Music is my healer and I wanted to write something to make them feel uplifted – the way music does for me.  I was thinking about my little nieces (and nephews) navigating through life at different ages and stages; it’s confusing enough as a young one, but then trying to understand that loss on top of that is so hard.  I thought about my own journey, what it’s like to be a female today.  Beat You Down came at the last minute, and it’s a message for my nieces: if they ever feel discouraged or hurt, don’t let it beat you down.  Stay close to your loved ones…it’s a message for anyone who needs a pick-me-up.  Life’s bigger than letting toxic people or trivial things get to you.”

The clip for Beat You Down is soaked in summery nostalgia, as TAMMA and her friends skateboard their way around Venice Beach.  It’s fun and uplifting, pulsing with young energy and life, and the picturesque visuals fit in beautifully with the message of the song.  TAMMA explains the concept behind the clip, saying, “Venice Beach is place close to my heart for many reasons, the warmth, the weirdness, the music, blue skies and palm trees, but mainly because of my awesome mates who live there, who also feature in the clip.  We filmed some of it in their backyard in their amazing airstream caravan.  I picked skateboarding because I wanted a visual representation where persistence and resilience pays off.  I have always loved and respected skateboarding since I was a kid, it’s an artform that requires courage to master it.  You get physically hurt as well as rejected from society and little recognition, you eat shit and you get up again!”

TAMMA is set to perform Beat You Down and a bunch of never-before-heard tracks live for fans at Farouk’s Olive in Northcote on October 21. Stoked to be showcasing her new music, TAMMA enthuses, “My shows are playful – I tell stories through my music that people relate to, we have laughs and an there is a lot of rawness and honesty in the room.  My songs are catchy, warm, summary and soulful.  This show will be performed with a live band which will be such a good vibe!”

Beat You Down is out now, via True Music.

The scenes of Evan Stanley and Mike Lefton are one and the same: their band, The DIVES. Stanley states: “I think we all eat, breathe, sleep The DIVES.” Lefton agrees and expands: “I do agree. Having said that […]

Tell us about Sweat Tours? Sweat Tours is a travel company offering all-inclusive tours to music festivals. Our tours are offered to people aged between 21-35 and include accommodation, festival tickets, private transfers, meals and […]

I like the beach more than anything. The beach feels like home all year round. In terms of a scene…I actually prefer to hermit most of the time.
Abbe May
All of the above and more in my shed every Friday night
Hound
All the wandering. The bastards and the angels. The sound of the rain and the pains of the heart. The silence. All the houses and all the rooms. All the keys and phones.
Raised By Eagles
Aside from music and everything creative, I love open-mind people, unexpected humour, seeing the world and nature, riding my bicycle, playing billiards. I’m also a fan of coffee, whiskey and most things vintage.
Jessica Stuart Few
It’s a delirium, really, but I like to live like this.
Hugo Race
Alice likes the Google. Sime likes taxidermy. It’s a pretty happening scene.
Sweet Jean
My scene is finding any excuse to dance with my 2 year old daughter Ruby.
Matthew Hardy, Comedian
I’m in with the Out-Crowd
Dave Warner
Art is my scene. No labels, restrictions or judgement. I love art in all it’s varied glory.
The Last 5 Queers
Book clubs, philosophy and extreme black metal
Elsen Price
The Astor Theatre on chapel st. Old cinema with copious amounts of atmosphere playing classic films (Chaplin, Gene Kelly, Kubrick, etc) and me with a honeycomb choc top spilt on my Tshirt because that’s just how I roll.
Jude Perl, Comedian
Wherever there is music is where I feel most at home
Toby Robinson
The car wash scene from Cool Hand Luke will do just fine thank you.
Old Gray Mule
Cool small bars with good food, good wine, good company
The Backsliders
I have no idea what my scene is; I have been listening to Dubstep and a bit of Drum N Bass. I found a lot of Hip Hop and RnB stuff is getting very interesting again it is pushing different sounds out. I’ve been really into cycling since the early ‘90s; racing mountain bikes and racing road bikes. So between cycling and music there is not much time left, a bit of sleep now and again.
Mike Edwards, Jesus Jones
Anywhere there is good company, great conversation, and a glass of red.
Helen Perris
I just do my best to live a life full of the things I love. Rock’n’roll, photography, New York City – they are three things right there that I love a lot!
Paul Miles
The dog park’s pretty good. I have a couple of miniature pinchers. And they’re the loves of my life. I take them for walks to the dog park; I’ve got a Harley Davidson I ride around. It’s not too exciting. It used to be sex, drugs and rock n roll; now I walk my dogs.
Stan Lee, The Dickies
Any scene with Al Swearangen & Mr. Wu from the show Deadwood ;)
Mathas
The beach. Tea with gin at your grandparents house. They have the best stories.
Betty & Oswald
I don’t wish to belong to any scene that would have me as a member (with thanks to Groucho Marx).
Bob Spencer, Raw Brit
I love being on a little boat near home in South West Victoria with a fishing line in the water, the Sun coming up or going down. I also love walking the streets of Melbourne or Manhattan or many of the beautiful towns and villages of Ireland or anywhere. My partner and my family are central to it all. I also love being in the midst of a great music session, anywhere, anytime, being transported into the soul of the Universe.
Shane Howard
Melbourne. Nowhere else is as great as Melbourne.
Brat Farrar
Comedy, surreal show girls, burlesque and theatre
MC KREWD
Obviously to create music. My family. I love driving my Ferraris.
Yngwie Malmsteen
That’s a hard one, although I do love anything electronic with an indie-pop feel!
Franki
Hiking a 14K foot mountain in Colorado
Cole Washburn
“Malcolm Hill is a lifetime member of the Melbourne Music Mafia and part of the ratpack of post punk Melbourne artists who have been keepin’ it real across diverse art forms for thirty years.”
Malcolm Hill
I am a simple man. My scene is simple. I like playing metal and spending time with my family.
Waclaw ”Vogg” Kieltyka, Decapitated
Bed. Pringles. Whisky. Attenborough doco. Wham.
Marlon Williams
World/folk. Acoustic and proud of it!
Ilana Cravitz, The London Klezmer Quartet
Scones, savory, sweet I don’t mind
The Wooden Sky
Fuck the Fucking Scene question! xo
Fuck The Fitzroy Doom Scene
Deep 70s disco, wonky synths, shady lyrics, fairy lights and cheap wine.