Tell us about your new single/ album/ tour?
“Funny Little World” is my second studio album release. It’s a collection of mostly self-penned compositions. It’s an indi/pop record marked with a retro feel, haunting melodies and frolicking beats- some uplifting tunes like GLOW sit beside more intense melancholy tracks like BLACK DOG. Peter Farnan who played on this record as well as being a member of my live band- The Fish Shop Collective, describes it as “a classic record you stumble across in a 70’s retro record store and wonder how did I miss this!”

My upcoming Flying Saucer show (14th May), will be preceded by the first ever performance by the “The Fish Shop Review” – showcasing the incredible talents of The Fish Shop Collective- a diverse roster of Melbourne’s elite musicians who recorded on my album as well as being part of my stunning live band.

Because the line-up varies from show to show, performances are always deliberately unique and fresh -not “carbon-copies”. On this occasion, I will be joined by: Stephen Hadley, (Tex Perkins Dark Horses), Clare Moore (Coral Snakes), Jack Howard (Hunters and Collectors), Claude Carranza (Black Sorrows), Bruce Haymes (Paul Kelly) and Roger Bergodaz (Lost Ragas) for a special presentation of songs from my album.

What’s your favourite work at this point in time?
If you are referring to my music work, it is definitely my new album, Funny Little World. I loved recording it and I am enjoying the ride of its release. Looking forward especially to The Flying Saucer show.

I’m also filming a new series for the ABC- 7 Types Of Ambiguity.

Tell us a quick, on the road or studio, anecdote.
Performing in a refurbished fish and chip shop in Burnie, Tasmania.

When I got there the eccentric owner/fan proudly said,” Miss Platt, I have turned the broom cupboard into a dressing room for you.”

Seriously! It was a whacky gig.

What, or who, inspires you?
I love hearing stories about people who are in their 90’s and still have a twinkle in their eye and are still very much in live and have a thirst and curiosity for it.

Which song do you wish you wrote?
Amsterdam by Jacques Brel

How would you describe your sound in food form and why?
Wow! Triple cream cheese -Fromager d’Affinois, baguette, and delicious red wine, freshly picked figs from my tree.

Why? Because they are delicious, wicked, soft, fresh, a combination that can take you anywhere…

What’s next for you?
This week I am performing with my band at Basement Discs as part of Record Store Day and also this week I am filming 7 Types of Ambiguity.

Most of this year I will be doing little tours and playing live gigs around Melbourne.

“….]the only people for me are the mad ones, the ones who are mad to live, mad to talk, mad to be saved, desirous of everything at the same time, the ones who never yawn or say a commonplace thing, but burn, burn, burn like fabulous yellow roman candles exploding like spiders across the stars and in the middle you see the blue centerlight pop and everybody goes “Awww!”― Jack Kerouac, On the Road

Following the successful launch of her stunning new album “Funny Little World” late last year, Alyce and her band, the “Fish-shop Collective” will be playing a special one-off show at the Saucer this May.

The retro sounds, haunting melodies and frolicking beats that flavour her new album, reveal Alyce’s fascination with sophisticated 1960’s European pop music. Alyce’s Flying Saucer performance will be preceded by the “The Fish-shop Review” – showcasing the incredible diversity and talent of The Fish-shop Collective who will also join Alyce on stage afterwards. 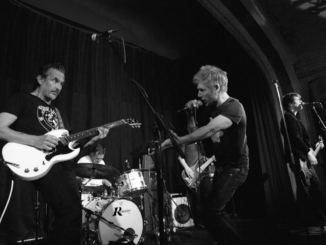