How would you describe the sound of the Festival as a whole food form and why?
1.25 kilogram rib eye steak on the bone cos we’re a meaty rock n roll festival.

What do you love about the Melbourne music scene?
Aussie pub rock is unique and its the best live music on the planet

Which song do you wish you wrote?
Rolling Stones ‘Gimme Shelter’

What’s your scene?
Cherry Bar In AC/DC Lane Melbourne, pretty much the best place on earth.

Cherry is proud to announce that it will be hosting its Tenth Birthday edition of Australia’s only dedicated rock n roll street festival CHERRYROCK016 on Sunday 1 May 2016 in AC/DC Lane and at Cherry Bar.

We are excited to announce our full line-up with the addition of our fourth International act, THE SIGIT from Indonesia! The Sigit (The Super Insurgent Group of Intemperance Talent), inspired by 70s Rock Gods, are a hard rock 4-piece who released their first EP in 2004. However, it was their fourth full-length release, ‘Detourn’ that earned the band the esteemed title from Rolling Stone Asia as “The Number One Act of 2013”.

As they say, never trust clowns…One other addition/change to the CherryRock016 line-up is that Clowns are now going to Belgium and have been replaced by High Tension, the punk rockers on a roll, featuring the enigmatic Karina Utomo on lead vocals.

Cherry Owner and Booker James Young adds, “Ten years under our belts and I firmly believe this is our best line-up ever. The Sigit from Indonesia sound like Graveyard from Sweden! Kadavar are my favourite band in the world and AC/DC Lane will grow a beard while these hairy Germans play. Supersuckers were born with a tail and will finally shake that tail in AC/DC Lane. And with locals such as High Tension, Power, Dead City Ruins and Dallas Frasca I know Melbourne’s CherryRock street rock n roll festival shall stand proudly beside the legendary Richie Ramone himself, together, too tough too die!” 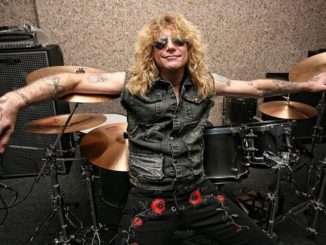 Flanelette pyjama pants.
Timberwolf
I like to be out in the nature, to get away. Go to the woods. My dad lives in the woods. Maybe once or twice a year I don’t have phone reception there is no Wi-Fi
Fredrik Åkesson, Opeth

I love being on a little boat near home in South West Victoria with a fishing line in the water, the Sun coming up or going down. I also love walking the streets of Melbourne or Manhattan or many of the beautiful towns and villages of Ireland or anywhere. My partner and my family are central to it all. I also love being in the midst of a great music session, anywhere, anytime, being transported into the soul of the Universe.
Shane Howard
I like to think that I belong to the head-strong Independent Music Scene – where we – musos and audience and everyone in between – all make gigs/tours, recordings, releases happen for ourselves and work our arses off to keep it going for the rest of our lives – all for the love of Music!
Florelie Escano
Going to the river on sunny afternoons with the blow up dingys and resting your beers on lily pads.
The Frowning Clouds
My bedroom
Nantes