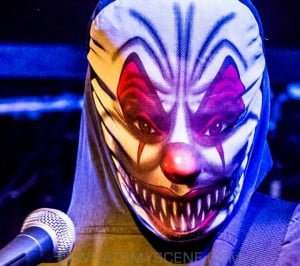 There’s nothing like a dose of punk rock to assault your sensibilities and get the adrenaline running fast enough to keep the old peepers wide open. Melbourne’s punk aficionados rolled into The Evelyn to see a band first conceived after a Damned gig, way back in ’77.

The Dickies took British and New York punk and injected it with their own Californian serum to make a new slapstick brand of irreverently silly music. In doing so they endeared themselves to fans of the genre everywhere, yet here in Australia we have had to wait 28 years to glimpse the band in all its glory.

After two Melbourne punk acts Pow Pow Kids and Strawberry Fist Cake warmed-up the crowd, we waited patiently for The Dickies to show.

This night there was a surprise band member making an appearance…Bethany the blow up doll was a popular and nubile addition, and she proved a popular dance partner. 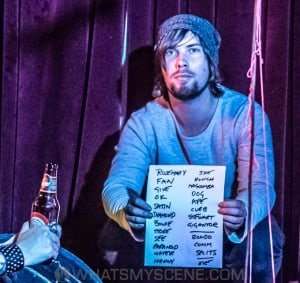 Leonard Graves Phillips’ (vocals) nerdy appearance belies the fact that he is a legend in these, very critical, circles. More power to him as he has outstayed some very tough times indeed with the deaths of several band members due to drug misuse and other health issues. Typically though, The Evelyn sound was shit and for most of the night it was difficult to hear any of Phillips’ vocals. Combine that with microphone feedback, and the band and punters were in for frustrating times.

Still, the show must go on, and that’s exactly what happened. The punters knew the words, the chords, the very essence of the music, and were in the mood to enjoy what The Dickies were dishing out. 24 songs – all of them classics, reverberated around the room and tweaked the eardrums of fans. Stan Lee (guitar), Dave Teague (guitar), Adam Gomez (drums) and Eddie Tater (bass) rocked it hard and fast and got the eclectic crowd excited.

Then…after 22 songs…there it was. It was the one that the oldies were waiting for with baited breath…nana na nanana nah, nana na nananananah. Think chimps, think banana, and think splits. Oh yeah! The cult classic ‘Banana Splits’ theme song. Perhaps a tad annoying but one of those ditties that stays in your brain for 26 years. (I hope that Justin Bieber doesn’t have the same degree of longevity or we may have to take to our brains with a pick-axe.)

It’s not often we get to see bands of such noble standing, so if you love punk rock and you appreciate your music without the bullshit factor, then you should bust your balls to see The Dickies play hard across Australia and New Zealand.

About Mary Boukouvalas 1483 Articles
Mary is a photographer and a writer, specialising in music. She runs Rocklust.com where she endeavours to capture the passion of music in her photos whether it's live music photography, promotional band photos or portraits. She has photographed The Rolling Stones, KISS, Iggy Pop, AC/DC, Patti Smith, Joe Strummer, PULP, The Cult, The Damned, The Cure, Ian Brown, Interpol, MUDHONEY, The MELVINS, The Living End, Foo Fighters, Smashing Pumpkins, Rage Against The Machine, The Stone Roses –just to name a few - in Australia, USA, Europe and the Middle East. Her work has been published in Beat magazine, Rolling Stone magazine, Triple J magazine, The Age Newspaper, The Herald Sun, The Australian, Neos Kosmos, blistering.com, theaureview.com, noise11.com, music-news.com. She has a permanent photographic exhibition at The Corner Hotel in Richmond, Victoria Australia.
Website Facebook Twitter YouTube

Forgive me if this piece is far more esoteric than usual, but Alithia and Caligula’s Horse inspire much introspection, philosophising and plain old belly button gazing. We’ll begin with Alithia, which is Greek for ‘the […]

Tell us about your new single/ album/ tour? Our latest single is called Chops. It’s had several working titles, but we finally settled on our original name for it. For us, it’s one of those […]

Book clubs, philosophy and extreme black metal
Elsen Price
Well these days my scene tends to revolve around my computer and being nudged by my dog to take her out for a walk. And then having my wife shout at me for spending time on my computer. I’m loving it actually. I’m quite relishing that scene. I miss them both very much.
Peter Hook, Joy Division/New Order/The Light
Aside from music and everything creative, I love open-mind people, unexpected humour, seeing the world and nature, riding my bicycle, playing billiards. I’m also a fan of coffee, whiskey and most things vintage.
Jessica Stuart Few
Staying home out of harms way.
Peter Milley, Cairo Club Orchestra
Alice likes the Google. Sime likes taxidermy. It’s a pretty happening scene.
Sweet Jean
When I’m not working in the studio or doing shows I’m at home with my partner and our baby so I guess they are my scene.
Way of the Eagle
Our scene is folk that are interested in change. Not just music, but breaking the norm, the boundaries and stereotype of Australian ’rock/pop’ music. Unpredictable, the question marks, the new jokers in town. Don’t Believe The Haze.
Slumberhaze
We can be dirty, we can be imperfect, we can be classy, it doesn’t matter. We drift between scenes and eventually may just create our own.
The Ugly Kings
Deep 70s disco, wonky synths, shady lyrics, fairy lights and cheap wine.