I was always in awe of Gibson J200 guitars. I first saw and heard the one that was used on The Shadows version of Apache. That guitar was borrowed from Cliff Richard. Bruce Welch from The Shadows played the great sounding rhythm guitar on Apache  (it was also used on other Shadows & Cliff Richard recordings). Cliff’s guitar has a sunburst finish.

Later on I saw it on record covers of American country & western artists and also in photos with Elvis. It’s such a great looking instrument. This is the big kahuna of Gibson acoustic guitars.

About Martin Cilia 49 Articles
Martin is an Australian guitarist and vintage guitar collector. Apart from his solo work he is a member of The Atlantics, Dave Warner’s From the Suburbs and is currently guitarist in Mental As Anything.
Contact: Website Facebook Twitter YouTube 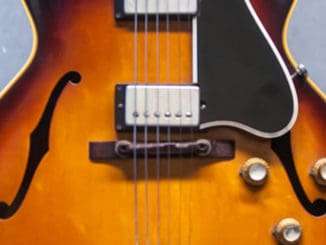 Flanelette pyjama pants.
Timberwolf
Wherever there is music is where I feel most at home
Toby Robinson

I love being on a little boat near home in South West Victoria with a fishing line in the water, the Sun coming up or going down. I also love walking the streets of Melbourne or Manhattan or many of the beautiful towns and villages of Ireland or anywhere. My partner and my family are central to it all. I also love being in the midst of a great music session, anywhere, anytime, being transported into the soul of the Universe.
Shane Howard
My scene is driving fast cars and shooting guns.
Ace Frehley
Act III, Scene VI of King Lear. A tense and gripping scene wherein the ageing king informs his three daughters that they have all been accepted as contestants on Family Feud.
Ben Pobjie, comedian
That’s a hard one, although I do love anything electronic with an indie-pop feel!
Franki

I’m in with the Out-Crowd
Dave Warner
Going to the river on sunny afternoons with the blow up dingys and resting your beers on lily pads.
The Frowning Clouds
Quirky cabaret bars that serve a mean G&T and boast a stellar cocktail list..which is why you’ll always find me returning to The Butterfly Club! I also love the buzz of a Fringe or Cabaret Festival, or a smart Opening Night. Any excuse for a dress up, really!
Amelia Ryan, Lady Liberty

When I’m not working in the studio or doing shows I’m at home with my partner and our baby so I guess they are my scene.
Way of the Eagle
Fuck the Fucking Scene question! xo
Fuck The Fitzroy Doom Scene

Well I’m still looking for my scene, and I think I might have found it. Between the pages of What’s My Scene Magazine.
Dave Faulkner, Hoodoo Gurus
Experimental electronica, musical metacreation, multiplicitous media, hacking.
Ollie Brown

Currently its the Yarra River Trail I’m walking along. Generally my scene would be Melbourne. Nothing feels or compares to home.
Simon McConnell, The Delta Riggs
Yass KFC
Simon, Loon Lake

Right now it’s a room with no lights on. An unmade bed. A laptop with 9% battery and a mosquito that just refuses to die.
Dave Larkin, Dallas Crane
I like to think that I belong to the head-strong Independent Music Scene – where we – musos and audience and everyone in between – all make gigs/tours, recordings, releases happen for ourselves and work our arses off to keep it going for the rest of our lives – all for the love of Music!
Florelie Escano
Scones, savory, sweet I don’t mind
The Wooden Sky