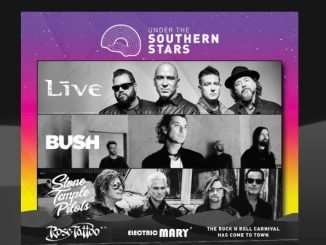 Q&A by Electric Mary – Lead Singer Rusty Brown Tell us about your new single/ album/ tour? We are smack bang in the middle of negotiations for a worldwide release with a live album, we […]

When I’m not working in the studio or doing shows I’m at home with my partner and our baby so I guess they are my scene.
Way of the Eagle
Fuck the Fucking Scene question! xo
Fuck The Fitzroy Doom Scene

Tunes, mates, and honesty. No dickhead policy!
Buddha In A Chocolate Box
Wherever there is music is where I feel most at home
Toby Robinson

I’m in with the Out-Crowd
Dave Warner
The dog park’s pretty good. I have a couple of miniature pinchers. And they’re the loves of my life. I take them for walks to the dog park; I’ve got a Harley Davidson I ride around. It’s not too exciting. It used to be sex, drugs and rock n roll; now I walk my dogs.
Stan Lee, The Dickies

I love being on a little boat near home in South West Victoria with a fishing line in the water, the Sun coming up or going down. I also love walking the streets of Melbourne or Manhattan or many of the beautiful towns and villages of Ireland or anywhere. My partner and my family are central to it all. I also love being in the midst of a great music session, anywhere, anytime, being transported into the soul of the Universe.
Shane Howard
I am a simple man. My scene is simple. I like playing metal and spending time with my family.
Waclaw ”Vogg” Kieltyka, Decapitated

My scene is driving fast cars and shooting guns.
Ace Frehley
I like to think that I belong to the head-strong Independent Music Scene – where we – musos and audience and everyone in between – all make gigs/tours, recordings, releases happen for ourselves and work our arses off to keep it going for the rest of our lives – all for the love of Music!
Florelie Escano
Melbourne. Nowhere else is as great as Melbourne.
Brat Farrar