I don’t recognize Marrickville these days … it’s moved on and I moved out half a lifetime ago. It’s been close to thirty years since I donned the uniform and delivered mail (by foot) around that sprawling leafy Sydney suburb for Australia Post.

For a time in my early twenties I left my social and musical life behind and became a virtual pork chop to all breeds of dog from Alsatian to Pomeranian. Honestly, fluffy pooches with ribbons in their hair took great delight in taking a bite out of my butt or at least attempting to. I really like dogs but back then I was just seen as a walking bone … or maybe ribs like those on the top of Fred Flintstone’s car.

My colleagues-in-mail were pretty old school.  The boss Billy was a laugh and there was one gal who worked there – poor Jacqui – a vegetarian from New Zealand. This lack of meat eating made no sense whatsoever to those blokes, who were more into racing, steak and beer. I’m not sure why one of the old guys wanted to show her a men’s magazine early one morning – best  not think about that.

According to rumours one of the fellas had won Lotto and simply came to work for something to do. Really … that’s the best you can think of? One afternoon I bumped into him eating fish and chips by himself on a lonely stretch of beach near Bronte. Weird – I guess money can’t buy friends. 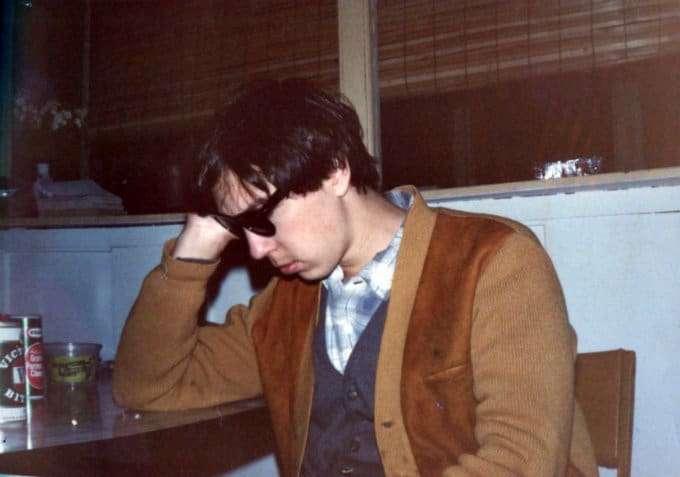 There was another young bloke there who played rugby and “sank piss”. He was a big unit from Casino, Queensland who took great joy in boasting to anyone who cared to listen his proudest moment in the big city, how he walked into a Vietnamese restaurant one Friday night after drinking a bladder full and proceeded to racially vilify the staff and urinate on the floor. A revolting human … and sad for the staff of said restaurant.

My social life became limited and gigs had become weekend-only affairs. I could barely stay awake past 10pm. Sorting mail into little pigeon holes, stuffing them in your satchel, walking for miles and stuffing them into other little slots was taking its toll. I’m pretty sure the highlight of my weekend had become watching “Hey, Hey It’s Saturday”. I’d be waking up early whilst my house mates were coming home from late night parties and band excursions. My body clock went awry and I felt like youthful fun and shenanigans were passing me by, so I simply quit, called it a day and moved onto a job with more socially acceptable working hours and more pleasant company.

Funnily, I’d probably appreciate the hours more these days, though a 5am rise mid-winter is still a challenge.

I’ve been back to Marrickville quite a bit in recent times, there seems to be a venue around every corner – The Newsagency, Lazy Bones, The Red Rattler, Camelot.  It looks like my Post Office has turned into a cafe … and all the pooches seem a whole lot friendlier.

Casino Lights / Spin The Wheel My father liked to gamble … just a little. I have memories as a lad of  waiting in the car outside the Gosnells TAB with my brother for what […]

My working life began around about the ripe old age of eight. My parents had acquired a property on the cusp of the Perth metropolitan area off the Brookton Highway up in the hills, in […]

Tegan Voltaire, The Voltaire Twins
My scene is at the moment Big Wongs General Tsos Chicken as I get sauce on the keys typing to you :-)
Brian Mackey
Hiking a 14K foot mountain in Colorado
Cole Washburn
Our scene is this big gorgeous wide world we live in all its majestic splendour!
Kim Salmon, The Darling Downs
Right now it’s a room with no lights on. An unmade bed. A laptop with 9% battery and a mosquito that just refuses to die.
Dave Larkin, Dallas Crane
Book clubs, philosophy and extreme black metal
Elsen Price
Quirky cabaret bars that serve a mean G&T and boast a stellar cocktail list..which is why you’ll always find me returning to The Butterfly Club! I also love the buzz of a Fringe or Cabaret Festival, or a smart Opening Night. Any excuse for a dress up, really!
Amelia Ryan, Lady Liberty
The beach. Tea with gin at your grandparents house. They have the best stories.
Betty & Oswald
Well I’m still looking for my scene, and I think I might have found it. Between the pages of What’s My Scene Magazine.
Dave Faulkner, Hoodoo Gurus
Staying home out of harms way.
Peter Milley, Cairo Club Orchestra
I will continue the continuum, singing my Songline.
Kutcha Edwards
“Malcolm Hill is a lifetime member of the Melbourne Music Mafia and part of the ratpack of post punk Melbourne artists who have been keepin’ it real across diverse art forms for thirty years.”
Malcolm Hill
Experimental electronica, musical metacreation, multiplicitous media, hacking.
Ollie Brown
When I’m not working in the studio or doing shows I’m at home with my partner and our baby so I guess they are my scene.
Way of the Eagle
I like to be out in the nature, to get away. Go to the woods. My dad lives in the woods. Maybe once or twice a year I don’t have phone reception there is no Wi-Fi
Fredrik Åkesson, Opeth
Currently its the Yarra River Trail I’m walking along. Generally my scene would be Melbourne. Nothing feels or compares to home.
Simon McConnell, The Delta Riggs
Anywhere there is good company, great conversation, and a glass of red.
Helen Perris
All the wandering. The bastards and the angels. The sound of the rain and the pains of the heart. The silence. All the houses and all the rooms. All the keys and phones.
Raised By Eagles
Our gigs have an air of danger and sex. Beautiful women are free to express themselves and are as dangerous as hell. Everybody can have a good time ’cos there’s a lot of love in the room and we just can’t help but stomp out that primeval swamp boogie ooze.
Chris Russell’s Chicken Walk
I don’t wish to belong to any scene that would have me as a member (with thanks to Groucho Marx).
Bob Spencer, Raw Brit
Local bands at sticky carpet venues. Vinyl. Social networking. Keeping healthy in order to play full throttle live sets. Loud rehearsals. Good people with creative ideas. PRIMITIVE ROCK.
Jon S Williams of City of Cool
Rock’n’Roll
About Heels on Decks
The TV show “Full House
World Wild
Wherever there is music is where I feel most at home
Toby Robinson
All of the above and more in my shed every Friday night
Hound
Any scene with Al Swearangen & Mr. Wu from the show Deadwood ;)
Mathas
My scene is finding any excuse to dance with my 2 year old daughter Ruby.
Matthew Hardy, Comedian
It’s Thonbury. It’s my dreaming. I’ve lived here 30 years and it’s evolved with me. The more I drink wine, the more wine bars appear in the neighbourhood. The more I eat, the more cafes appear in the neighbourhood. Fantastic.
Denise Scott, Comedian
Comedy, surreal show girls, burlesque and theatre
MC KREWD
Melbourne. Nowhere else is as great as Melbourne.
Brat Farrar
Obviously to create music. My family. I love driving my Ferraris.
Yngwie Malmsteen
All the kids who weren’t cool at school and still aren’t. Those people who didn’t manage to become awesome artists and uber hip performers. The raggy dolls who never found a way to make their raggy doll-ness work for them.
Jonathon Duffy
Hot, hot lovers
Luke Monks, Gay Paris