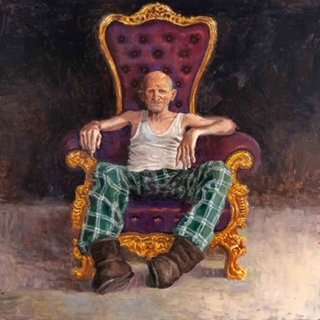 Tell us about your new single ‘Needle’?

Long story short, it’s written about our good mate and previous drummer BJ who was diagnosed with cancer and his battle of survival. It’s a heavy but uplifting song that takes you through all the motions !

It would have to be the new song ‘Needle’, it’s by far the most personal and real song we have written and for the song to turn out the way it has means the world to us!

I’d say a 1kg ribeye with the bone in, a side of wilted greens and herb encrusted fries with pepper gravy.

As to why, I think we started out as a steak and chips from the local pub but have transformed into a decadent succulent meal from a fine dining establishment where you go to spend a week’s pay on the meal of your life !

Every time we stay at a hotel in Canberra we ask for a printed out laminated photo of someone famous on our pillow to see if they read our requests, it all started with Patrick Swayze in his prime and they did absolutely deliver.

John Farnham and Jimmy Barnes singing ‘When Something is Wrong with my Baby’ … pinnacle of Australian music right there!

I love the lyrics in that song, the way it’s sung, classic song !

Debut album! Just trying to raise some funds on a tour coming up early next year and hopefully be in the studio in 4-6 months time !

Thursday afternoon at the pub with a few mates after work.

Sydney rockers Marvell have today announced their most powerful single to date – Needle, a true journey of a song that describes the hardships, trauma and impossible hope that accompanies a cancer battle, released today.  Accompanying the track is an equally affecting video, made in collaboration with Brae Fisher (Dear Seattle).  Needle precedes Marvell’s new EP, Comfort Is King which is set for release on December 9 – fans can pre-save the record now and Sydneysiders can check out the band’s dynamic live show when they play Avalon RSL on December 4.

Needle is one of those songs that sticks with you long after the first listen.  Bold, raw, defiant and brave, the track begins with a soft acoustic guitar and vocalist Max Marvell’s sole voice before interchanging vocals with his brother Tom in the second verse – symbolic in that cancer can be a lonely road, but a second voice joins in to support – then builds into a massive, full band climax, mimicking the often startling, always affecting journey that follows a cancer diagnosis.  For Marvell, the song is deeply personal, as Max explains, “We wrote Needle when our then-drummer BJ was battling testicular cancer.  We wanted to write about how we felt, imagining ourselves in his shoes and really trying to understand what he was going through, rather than just telling his story.  The track starts as something contemplative, going through the fear and the uncertainty then quickly evolving into a more powerful song, daring at the possibility of hope.  We wanted to blend the visceral, contradictory feelings of such a devastating situation with the sterile, procedural reality that we saw BJ going through.  All in all, this track aims to capture that feeling of staring down the barrel of something terrible, when all the odds are against you, and saying fuck it – I’m going to give all I’ve got to make it through.”

The video for Needle is a deeply rare experience – all the emotion of the song is beautifully, respectfully reflected in visual form through the story of a man trying to escape a bad situation.  Speaking on the conception of the clip, Max explains, “The video tells a symbolic story that relates to the lyrics and BJ’s battle with cancer, but also depicts the themes of struggle in a more general way.  We bounced around ideas and initially wanted to paint a very raw picture of cancer specifically, but decided that representing the themes in a more abstract way would allow the audience to dig a little deeper to find their own meaning.  We wanted people to empathise, rather than just be told a story.  We let Brae Fisher take the story and put his own spin on it, writing and directing a film that depicts a nameless man escaping from unknown captors.  We wanted to capture the desperation and panic of the escape as the man runs away from something that is unknown to the audience.”

Evocative of Australian rock legends Powderfinger, Paul Kelly, and modern influences such as Catfish and the Bottlemen and local heavy act Ceres, the EP, Comfort Is King, is demonstrative of a band in their element.  Secure in their sound, confident in their songwriting skill, the EP shines from start to finish – from the contemplative, emotional Needle, to the upbeat Ratalatat, to the sweet organ sounds of Honey and the stunning, gentle closer All Of It, this is true brilliance in the form of rock/pop songwriting.  Crunchy guitars pair perfectly with acoustics, pounding drums marry with the Marvell brothers’ harmonies – Comfort Is King has it all, as Max says, “Ultimately, we wanted to make a fun, energetic record, despite some of the other stuff that life had thrown at us and our mates, so that we could address all the painful parts that led up to this record while not letting it take us over completely.  We wanted to try and find the fun and the life amongst it all to keep us going and that’s what this record is about; acknowledging the shitty times but also remembering why we play and make music – because it’s a blast and brings us all together despite anything else.”

Needle is out today. Comfort Is King is out December 9 and available to presave here. 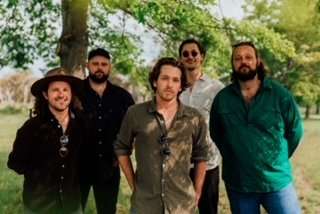 About Mary Boukouvalas 1477 Articles
Mary is a photographer and a writer, specialising in music. She runs Rocklust.com where she endeavours to capture the passion of music in her photos whether it's live music photography, promotional band photos or portraits. She has photographed The Rolling Stones, KISS, Iggy Pop, AC/DC, Patti Smith, Joe Strummer, PULP, The Cult, The Damned, The Cure, Ian Brown, Interpol, MUDHONEY, The MELVINS, The Living End, Foo Fighters, Smashing Pumpkins, Rage Against The Machine, The Stone Roses –just to name a few - in Australia, USA, Europe and the Middle East. Her work has been published in Beat magazine, Rolling Stone magazine, Triple J magazine, The Age Newspaper, The Herald Sun, The Australian, Neos Kosmos, blistering.com, theaureview.com, noise11.com, music-news.com. She has a permanent photographic exhibition at The Corner Hotel in Richmond, Victoria Australia.
Website Facebook Twitter YouTube

Tell us about your new single? The brand new single “Love Thirsty” is in a style of music like I’ve never written before. It sits in this new world of songwriting for me, where the […]

Tell us about your new single/ album/ tour? We’ve just unleashed our new single Sharkitect. A tale of one’s grief gazing at a mother and baby’s relationship on a Melbourne train. Recorded at Legion Studios […]

Less than a year since the release of their latest album, the explosive Forgetting The Future, British India are thrilled to announce they’ll be returning to stages around the country in May and June on […]

Tegan Voltaire, The Voltaire Twins
Our gigs have an air of danger and sex. Beautiful women are free to express themselves and are as dangerous as hell. Everybody can have a good time ’cos there’s a lot of love in the room and we just can’t help but stomp out that primeval swamp boogie ooze.
Chris Russell’s Chicken Walk
Book clubs, philosophy and extreme black metal
Elsen Price
That’s a hard one, although I do love anything electronic with an indie-pop feel!
Franki
Scones, savory, sweet I don’t mind
The Wooden Sky
The dog park’s pretty good. I have a couple of miniature pinchers. And they’re the loves of my life. I take them for walks to the dog park; I’ve got a Harley Davidson I ride around. It’s not too exciting. It used to be sex, drugs and rock n roll; now I walk my dogs.
Stan Lee, The Dickies
I like to think that I belong to the head-strong Independent Music Scene – where we – musos and audience and everyone in between – all make gigs/tours, recordings, releases happen for ourselves and work our arses off to keep it going for the rest of our lives – all for the love of Music!
Florelie Escano
Hot, hot lovers
Luke Monks, Gay Paris
All of the above and more in my shed every Friday night
Hound
All the wandering. The bastards and the angels. The sound of the rain and the pains of the heart. The silence. All the houses and all the rooms. All the keys and phones.
Raised By Eagles
I think my style is more just making cameos in everyone else’s scene.
Mojo Juju
“Malcolm Hill is a lifetime member of the Melbourne Music Mafia and part of the ratpack of post punk Melbourne artists who have been keepin’ it real across diverse art forms for thirty years.”
Malcolm Hill
Act III, Scene VI of King Lear. A tense and gripping scene wherein the ageing king informs his three daughters that they have all been accepted as contestants on Family Feud.
Ben Pobjie, comedian
What’s my scene? well…
And another thing I’ve been wondering lately
Oh, baby,
Tell me where have you been?
Now the stage is set
Where’s my Juliet, baby?
Is it maybe
My Midsummer Night’s Dream?
What’s my scene?
Clowns
Tunes, mates, and honesty. No dickhead policy!
Buddha In A Chocolate Box
My scene is finding any excuse to dance with my 2 year old daughter Ruby.
Matthew Hardy, Comedian
Well I’m still looking for my scene, and I think I might have found it. Between the pages of What’s My Scene Magazine.
Dave Faulkner, Hoodoo Gurus
I will continue the continuum, singing my Songline.
Kutcha Edwards
My scene is at the moment Big Wongs General Tsos Chicken as I get sauce on the keys typing to you :-)
Brian Mackey
My family, my friends, my home.
Cory Putman, Norma Jean
My scene is driving fast cars and shooting guns.
Ace Frehley
Wherever there is music is where I feel most at home
Toby Robinson
Yass KFC
Simon, Loon Lake
Our scene is this big gorgeous wide world we live in all its majestic splendour!
Kim Salmon, The Darling Downs
Our scene is in the city of Bath, a small city with a very big musical identity, we play the British festivals and I am also in the ’choirs scene’. We are also in other bands for fun, music all the way, roll on summer!
Su Hart, Baka Beyond