If you don’t know, why ask? Life is constantly changing, barely know myself what I’m doing right now, we are playing the Spotted Mallard this Saturday night with Giants of Brit Rock.

Any song with good lyrics and a memorable tune. There are thousands of thousands of good songs. A solid melody and driving riff are key elements. Which rules out most contemporary stuff.

Full on spice, with meat and potato base

Any song with good lyrics and a memorable tune. There are thousands of thousands of good songs. A solid melody and driving riff are key elements. Which rules out most contemporary stuff.

Have you been touring much? Any on the road anecdotes?

Playing heaps, touring Spain, Greece… Europe, I guess next year. Any road stories would require heavy censoring or take too long. It’s been a full life, leave it at that.

Probably a beer. I’m out of scotch

Steve Lucas, vocals, guitar – Steve was a founder member of the trail blazing punk band X in the late 1970’s. With producer Lobby Loyde they recorded the acclaimed album X-Aspirations in 5 hours and that album singlehandedly redefined the Australian underground music scene. Steve has been actively recording group and solo albums since that time and remains a dynamic performer with a magnificent voice. He also loves singing Steve Marriott (of the Small Faces) songs.

Featuring the music of The Hollies, The Kinks, Small Faces, The Who.

Can you imagine a ’60s style package show featuring sets by The Hollies, The Kinks, Small Faces, The Who? Would that not be something?

Well Melbourne’s ’60s specialists, The Substitutes, have put together a show that presents a dazzling array of period music from these bands. To help out they have enlisted the legendary Steve Lucas (ex X), Gil Matthews (ex Billy Thorpe) and Dan Robinson (ex Wild Cherries).

So what can you expect? Pop harmonies from The Hollies, quirky English rock from The Kinks, ball tearing passion and soul from the Small Faces and finally, the explosive music of The Who.

Peter Summers has been driving The Substitutes to explore the areas of ’60s music that are often ignored and has specially curated the music to be presented in this show. Expect some surprises! 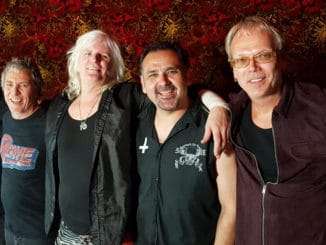