Tell us about your latest show?

I DJ’d with the legendary Cherie Currie at Cherry Bar last week. It was a buzz because my girfriends and I recently did a Runaways tribute band ‘Cherry Bomb’.

What genre of music is your favourite? Does it get the crowd dancing?

Rock n’ Roll. I sure hope it gets the crowd dancing otherwise I’d be out of a job! Seriously though, who can’t dance to T.Rex?

How would you describe your choice of music in food form?

Lady Gaga ripping open my shirt and grabbing my boob to AC/DC’s ‘Long Way to the Top’ was pretty memorable to say the least.

What is the weirdest music request you’ve received?

My husband requested the Jaws Soundtrack the other day. That’s pretty weird.

If you were stuck on a desert island and could only save three albums, which would they be?

As well as her residencies at Cherry Bar, catch DJ Mermaid at Glitter & Glam at The Spotted Mallard

DJ Mermaid is not only a fiery staple on Melbourne rock’n’roll scene, she is one of Melbourne’s and New Zealand’s premier rock DJ’s.

Her ongoing Cherry Bar residency is a testament to this. Starting in 2003 at Cherry Bar, ACDC lane, she has held an ongoing Wednesday and Saturday night DJ residency since 2011.

DJ Mermaid is synonymous with the world renowned rock ‘n’ roll venue. Frequented by international A-list rock stars, the following some of those she has DJ’d with:

In addition to this, she has held residencies at; The Retreat, The Prince of Wales, Yah Yahs, Cherry Bar and Great Britain Hotel as well as DJ slots at venues including; The Corner Hotel, The Northcote Social Club, The Tote, The Gem, Labour in Vain, Ding Dong Lounge, B.East, Mesa Verde, Dr Morse, The Pinnacle, Bellville and The Old Bar. DJ Mermaid has also DJ’d many corporate and private functions including media events such as MTV’s Upfront.
Being a musician herself, she has an understanding of music that goes beyond the playlist. She instinctively creates a sound specifically for the venue that resonates with the patrons. Never is there an empty dance floor, table top or a strand of hair unflicked once DJ Mermaid drops the needle.
This is reflected in her vast record collection, crossing genres with music from the likes of Grace Kelly to GOD, while including local and international up and comers. With an ability to recognise a good band when she hears it, she has many original records from bands such as Tame Impala or The Kills that were purchased when she saw them at venues, such as The Espy, and building them into her sets well before they were picked up by any radio programmer.

DJ Mermaid goes to gigs, plays gigs and keeps the gig going until 5am every week; rain, hail or soundwave week… 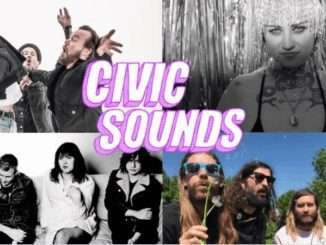