What’s your favourite work at this point in time?
Id probably have to say our new track Lucy which is track 5 on the EP. I have a very personal attachment to this track as its one of the first songs that i felt as a primary songwritter. I worked on the song with our lead singer/rhythm guitarist Lawson about 2 years ago and together we were able to come up with something that im veru proud of.

Tell us a quick, on the road or studio, anecdote.
When we recently played in Port Maquarie Liam our lead guitaris, Jacob our manager and i were all still up around 2am having a few drinks and enjoying the evening. Until we got offerred to attend an early morning jam session with a couple of old rockers. We decided to take them up on this offer and it was nothing short of incredible. Something ill never forget.

What, or who, inspires you?
My biggest drumming inspirations would have to be Dominic Howard of Muse and John Bonham of Led Zeppelin. Both of those guys really taught me everything i know about rock n roll drumming and continue to inspire a lot of my drums patterns today.

Which song do you wish you wrote?
I really wish i wrote ‘Bad’ by U2. I came to love U2 as a kid after my dad showed me their performance at Live Aid and ill never forget watching them play ‘Bad’ for the first time. Absolute masterpiece.

How would you describe your sound in food form and why?
I’d probably have to say a secilian tappas of spice and emotion followed by a side of spicy kung pao chicken (hold the salad). Port Royal aint messing around.

What’s next for you?
Well we are roughly half way through this EP tour so we sre really lookojg forward to more time on the road and also our massive homecoming show at The Triffid in Brisbane. We are already starting to make plans for more touring and some new releases.

What’s your scene?
The brisbane musis scene is our spiritual home. The scene in Brisbane is constsntly growing with new talented bands re inventing some incredible genres. The rock and roll scene in Brisbane in growing as well which we are very proud to be apart of.

Port Royal proudly wear their vintage rock n roll influences on their tie dyed, flowing sleeves. In an era where everything old is new again, the quartet channel rocks forefathers and put them on display for a new generation to fall in love with.
The swing of the Stones, the riffage of Zeppelin and the psychedelica of latter day Beatles combine for a retro journey like no other. Sing alongs, good vibes and a feeling of innocence. Port Royal are the ultimate escape from modernity, back to a time where it really was all about the songs.
Formed in 2015, they came out swinging with their first EP, The Express, in mid 2016 and hit the road playing with the likes of The Delta Riggs, Wolfmother and The Cherry Dolls and quickly built up a rep as a band to watch.
In 2017 they dropped the rocking Get Heavy. It’s Stooges like swagger saw it get voted in at #2 on 4ZZZ’s Hot 100 on New Years Day 2018 and the band toured the east coast again, gaining new fans at every show.
In April this year, Port Royal unleashed a belter in the form of Rock & Roll Is Dead. The track proves that rock is anything but dead. It’s loose, high octane retro goodness was the fuel for another east coast run that culminated in a sold out homecoming show!
Watch the Vampire themed music video for Rock & Roll Is Dead

With its Beatlesque swing and sing along chorus reminsicent of some of Brit Rocks finest, it’s retro vibe also feels refreshingly new.  And.. that Trumpet solo is killer!

The EP continues to get rave reviews and is turning up on retro playlists all over the place. Rock fans of all ages are fast becoming aware that there is this band out of Brisbane, delivering the tunes…

The boys have already put a stack of miles on the clock supporting Love, Passion, Satisfaction  taking their tunes down through NSW, selling out merch AND rooms along the way.
But the tour is far from over. If you haven’t experienced a rock n roll show in a while, get to one of these shows! 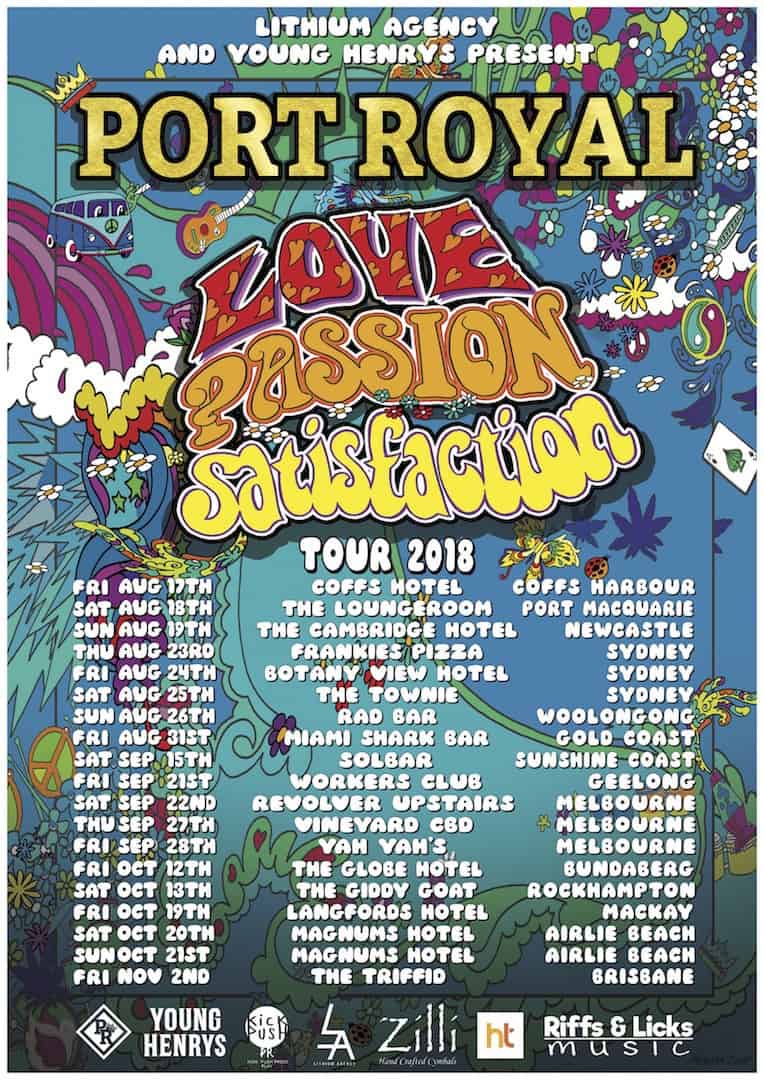 I don’t wish to belong to any scene that would have me as a member (with thanks to Groucho Marx).
Bob Spencer, Raw Brit
It’s beards.
Nathaniel Beard, The Beards
We can be dirty, we can be imperfect, we can be classy, it doesn’t matter. We drift between scenes and eventually may just create our own.
The Ugly Kings
I love being on a little boat near home in South West Victoria with a fishing line in the water, the Sun coming up or going down. I also love walking the streets of Melbourne or Manhattan or many of the beautiful towns and villages of Ireland or anywhere. My partner and my family are central to it all. I also love being in the midst of a great music session, anywhere, anytime, being transported into the soul of the Universe.
Shane Howard
My family, my friends, my home.
Cory Putman, Norma Jean
Leadfinger is a very strange band, hard to define, but we are free.
Stew, Leadfinger
I have no idea what my scene is; I have been listening to Dubstep and a bit of Drum N Bass. I found a lot of Hip Hop and RnB stuff is getting very interesting again it is pushing different sounds out. I’ve been really into cycling since the early ‘90s; racing mountain bikes and racing road bikes. So between cycling and music there is not much time left, a bit of sleep now and again.
Mike Edwards, Jesus Jones
I like to be out in the nature, to get away. Go to the woods. My dad lives in the woods. Maybe once or twice a year I don’t have phone reception there is no Wi-Fi
Fredrik Åkesson, Opeth
Our gigs have an air of danger and sex. Beautiful women are free to express themselves and are as dangerous as hell. Everybody can have a good time ’cos there’s a lot of love in the room and we just can’t help but stomp out that primeval swamp boogie ooze.
Chris Russell’s Chicken Walk
The beach. Tea with gin at your grandparents house. They have the best stories.
Betty & Oswald
That’s a hard one, although I do love anything electronic with an indie-pop feel!
Franki
My scene is at the moment Big Wongs General Tsos Chicken as I get sauce on the keys typing to you :-)
Brian Mackey
I just do my best to live a life full of the things I love. Rock’n’roll, photography, New York City – they are three things right there that I love a lot!
Paul Miles
Quirky cabaret bars that serve a mean G&T and boast a stellar cocktail list..which is why you’ll always find me returning to The Butterfly Club! I also love the buzz of a Fringe or Cabaret Festival, or a smart Opening Night. Any excuse for a dress up, really!
Amelia Ryan, Lady Liberty
My bedroom
Nantes
I like to think that I belong to the head-strong Independent Music Scene – where we – musos and audience and everyone in between – all make gigs/tours, recordings, releases happen for ourselves and work our arses off to keep it going for the rest of our lives – all for the love of Music!
Florelie Escano
Our scene is folk that are interested in change. Not just music, but breaking the norm, the boundaries and stereotype of Australian ’rock/pop’ music. Unpredictable, the question marks, the new jokers in town. Don’t Believe The Haze.
Slumberhaze
It’s a delirium, really, but I like to live like this.
Hugo Race
It’s Thonbury. It’s my dreaming. I’ve lived here 30 years and it’s evolved with me. The more I drink wine, the more wine bars appear in the neighbourhood. The more I eat, the more cafes appear in the neighbourhood. Fantastic.
Denise Scott, Comedian
My scene is driving fast cars and shooting guns.
Ace Frehley
All the wandering. The bastards and the angels. The sound of the rain and the pains of the heart. The silence. All the houses and all the rooms. All the keys and phones.
Raised By Eagles
My scene is finding any excuse to dance with my 2 year old daughter Ruby.
Matthew Hardy, Comedian
Book clubs, philosophy and extreme black metal
Elsen Price
My scene is Brunswick. I love it. It provides me with just about everything I need.
About Charlie Marshall
Rock’n’Roll
About Heels on Decks
Sitting in the sun, in a nice chair, with a good book.
James Reyne
Deep 70s disco, wonky synths, shady lyrics, fairy lights and cheap wine.