How do you prepare for a show?
By threatening my band. For every mistake is a loss of $10 from their pay.

How long have you been playing guitar?
I began at 5 years of age. That gives me 33 years of playing. You’d think i’d be better by now.

Why did you first start playing?
Delusions of grandeur

Describe your favourite guitar
I really wish i hadn’t sold my PRS to some dickhead banker who could barely play.

Tell us a quick, on the road or studio story!
We we’re meant to drive from Brisbane to Mackay for a gig to know. We pulled out and spent 2 days swimming in a town named 1776 where we came very close to being eaten by a shark.

What, or who, inspires you in daily life?
The thought that surely, it will get better, and secondly, the thought that i should be grateful for the things i have. These two thoughts are battling it out in my head right now. It’s a tie.

Which song do you wish you wrote?
Beethoven’s 5th

How would you describe your sound in food form and why?
The music performed at my Blindfold gig will sound like letting Brie cheese and Smoked Salmon melt in your mouth followed by a sip of Pinot Noir.

What’s next for you?
Album release and tour. And smiles from here till the end.

What’s your scene?
Initial confusion followed by appreciation, if open-mindedness is considered. 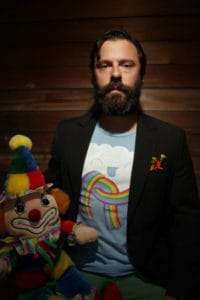 For the Sydney Guitar Festival, Brian will be arranging music for a unique performance where the audience is to be blindfolded.

After receiving rave reviews from his SOLD OUT SGF 2017 performance, Brian returns for his victory lap with ‘Get Blind with Brian! The Sequel.’

Brian Campeau is mostly known for his complex guitar playing accompanied by long sorrowful vocals. He is much less known for his charm and willingness to please his audience. That’s because some people don’t like his sense of humour, but that’s ok, right?

He’s originally from Canada, but he’s been in Australia since 2003, so that pretty much makes him true blue.

Though he tends not to like being compared to other artists, he does see some value to these comparisons. With this in mind, some would say Brian sounds like Nick Drake mixed with Radiohead. Others might say he sounds like Mary Schneider, but that would be misleading because he sounds nothing like that.

About the Sydney Guitar Festival

Leading the lineup is Australia’s most iconic guitarist Tommy Emmanuel who will be performing a very special show with his brother Phil Emmanuel. This family affair will showcase the jaw-dropping fingerstyle technique that catapulted Emmanuel to international stardom, an event not to be missed by any Australian music fan.

The festival is also thrilled to welcome American guitarist and composer Kaki King, who will be performing her groundbreaking audio-visual set ‘The Neck is the Bridge to the Body’. The jaw dropping work will be showcased alongside one of the most exciting acoustic singer-songwriters on the scene, Daniel Champagne.

Australian classical guitar maestros Grigoryan Brothers return to the festival in 2018, this time accompanied by Beijing Guitar Duo for one exclusive show. Meng Su and Yameng Wang gave their New York debut at Carnegie Hall in 2010 and have since stunned audiences all over the world with their artistry and technical ability.

And finally, introducing The inaugural Sydney Guitar Festival Gala! This unique event will feature an incredible curated line-up of artists from the 2018 festival. From classical to blues, acoustic to rock, the gala is the perfect chance to see some of Australia and the world’s best guitarists doing what they do best.

Venues housing the diverse lineup of events include Marrickville’s largest hub of arts and culture, The Factory Theatre, Northern Sydney’s performing arts gateway The Concourse and Sydney’s most iconic music venue The Enmore Theatre, with more spaces to be announced.

The Pioneers of Rock n Roll
The Factory – Saturday 18 August

Tegan Voltaire, The Voltaire Twins
Act III, Scene VI of King Lear. A tense and gripping scene wherein the ageing king informs his three daughters that they have all been accepted as contestants on Family Feud.
Ben Pobjie, comedian
I will continue the continuum, singing my Songline.
Kutcha Edwards
Alice likes the Google. Sime likes taxidermy. It’s a pretty happening scene.
Sweet Jean
Anyone who welcomes a hairy, gold wearing, hot air blowing idiot to a dinner table is my scene.
Henry Wagons
Our gigs have an air of danger and sex. Beautiful women are free to express themselves and are as dangerous as hell. Everybody can have a good time ’cos there’s a lot of love in the room and we just can’t help but stomp out that primeval swamp boogie ooze.
Chris Russell’s Chicken Walk
Well these days my scene tends to revolve around my computer and being nudged by my dog to take her out for a walk. And then having my wife shout at me for spending time on my computer. I’m loving it actually. I’m quite relishing that scene. I miss them both very much.
Peter Hook, Joy Division/New Order/The Light
I have no idea what my scene is; I have been listening to Dubstep and a bit of Drum N Bass. I found a lot of Hip Hop and RnB stuff is getting very interesting again it is pushing different sounds out. I’ve been really into cycling since the early ‘90s; racing mountain bikes and racing road bikes. So between cycling and music there is not much time left, a bit of sleep now and again.
Mike Edwards, Jesus Jones