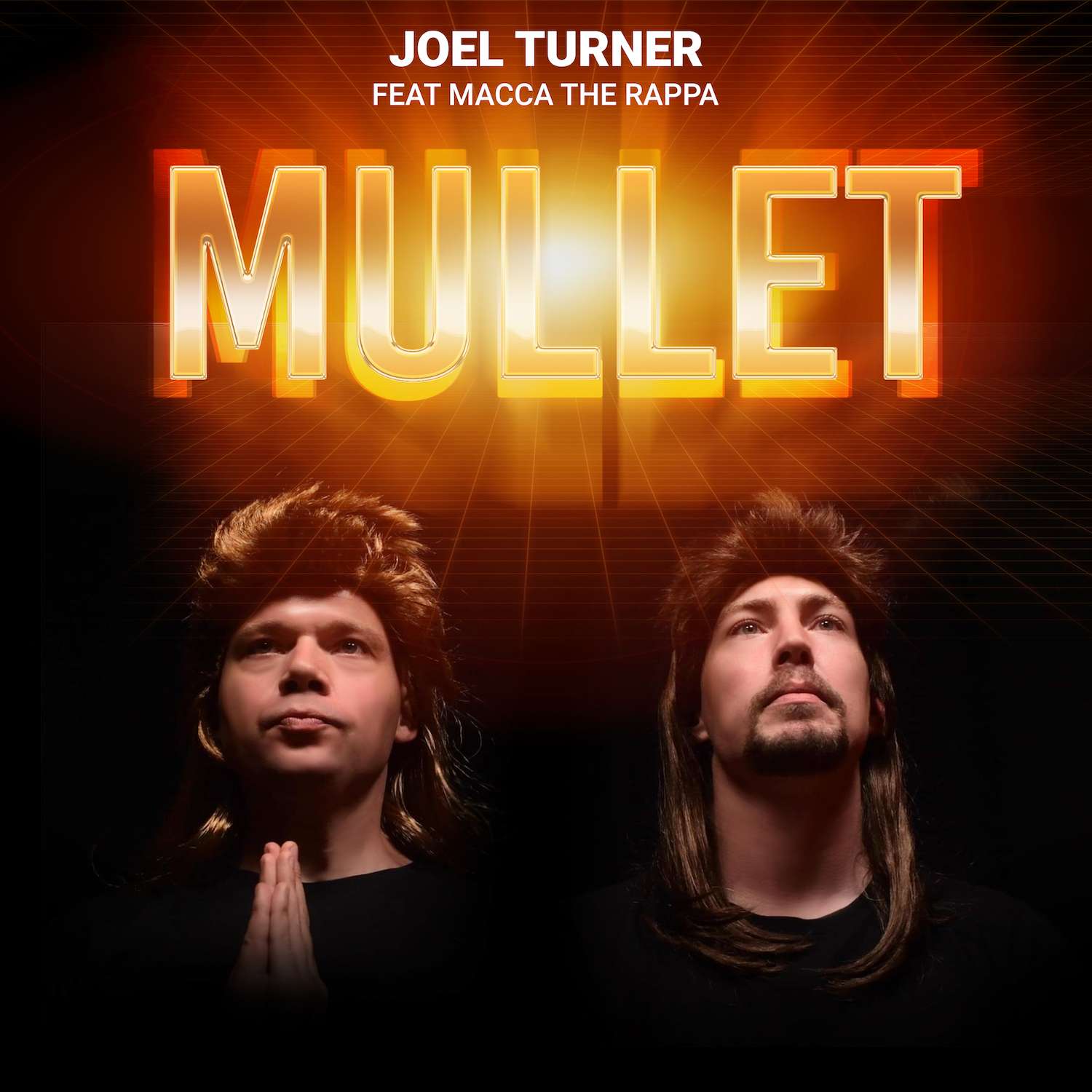 Tell us about your new single Mullet?

Mullet is a comedy rap track about Mullets. I wanted to write a mullet anthem because no haircut has copped more crap or controversy over the years than the mullet. I noticed that everyone from kids to adults, to celebrities and athletes were rocking mullets so it was the right time to bring out a track like this.

These Kids and Lady from my first album

Mixed Paella because my music a mixture of what I’m feeling at the time. Could have rock guitar or Latin style, blues, funk etc….

When I was performing a gig in front of a large crowd but they had 1 sound guy between 3 stages so we had no fold back. That was a challenging moment for me because the sound was hitting my ears half a second late and a semitone out of pitch but we still managed to pull off a good show.

I get inspired by learning new things that I can use in my tracks. There’s always room for growth

I’m not boxed in to one scene because my style is versatile. I have a hiphop/street cypher background as a beatboxer but also enjoy and can appreciate many forms of live music.

Hold onto your hair and your hats, Aussie singer-songwriter and beatbox extraordinaire Joel Turner is back with his first new material in well over a decade; and he’s celebrating the iconic mullet itself with a brand new track Mullet out now featuring Macca the Rappa.

Mullet fuses comedy, rap and an undeniable Aussie spirit with guest vocalist Macca the Rappa firing off mullet-friendly lyrics like, “I’m going back to Queensland / Yeah, XXXX is my brand” alongside some 90s hip hop elements and driving beatboxing from Joel himself. Recorded with MC Preech with mixing by Steve Scanlon, Mullet re-announces Joel and his skills that first turned heads as the surprise standout of Australian Idol’s inaugural season back in 2003 in fun and tongue-in-cheek fashion. Of the inspiration to pen an ode to the hairstyle dubbed “business up front, party down the back”, Joel shares, “We’ve had this idea for a while now, but it felt like the right time to bring the song out since mullets have made a comeback. We kept noticing that heaps of everyone from kids to adults to celebrities and even athletes were rockin’ mullets, so we thought: it’s time.”

The accompanying music video for Mullet found both Joel and Macca the Rappa working alongside Peter Stagg of Stagg Productions to bring the pair’s larger than life narrative to mullet-worthy fruition. Featuring young dynamos Sun-Son and Maxim stealing the show in co-starring roles, Mullet’s video largely showcases the two young stars miming along and rocking their own mullets, while Joel and Macca do what they do best: beatboxing, repping “Bring Back The Mullet” tees and rocking mullet wigs while paying momentary visual homage to Queen. As to who the ultimate brainchild was behind the hilarious clip? “Macca the Rappa wrote the overall storyboard, “ Joel reveals. “And I had some ideas along the way like the over-the-top eccentric barber”.

Having been immersed in the creative arts and songwriting since first playing guitar and drums as a child, Joel, brother Tim and cousin Chris Heiner began performing together under the moniker Modern Day Poets, with the group soon changing their name to Joel Turner and the Modern Day Poets to capitalise on Turner’s runaway success following his Australian Idol appearance in its debut season. And it was on the very Australian Idol stage that Joel first caught the eyes and ears of one man in particular: none other than the touchdown king himself, Mark Holden, and it’s a relationship that has only blossomed over nearly two decades, with Mark also a key driving factor behind the long-awaited release of Mullet. “Joel Turner was the surprise breakout of Australian Idol’s first season. The whole country fell in love with Joel’s extraordinary talent,” shares Mark. “A singing show launched a beatboxer! When the dust settled, I followed up and discovered not only an exceptional beatboxer but a writer, producer, singer and brilliant guitar player. Joel played me a stunning song called Change he wrote, produced, played guitar on, sang, and beatboxed. I then asked whatever happened to that song Mullet? Back in 2005 it was going to be the next single. ‘Nothing,’ was the reply. So, Dream Dealers signed those two songs and here we are. It’s great to be back in the music business after twelve years as a barrister. It feels really good working with Joel again. He’s got such a beautiful soul and is a singular talent”.

Signing to Mark’s label Dream Dealers, Joel and the Modern Day Poets’ double Platinum single These Kids swooped in at #1 on the ARIA singles charts upon release in 2004, with the group’s Gold-certified, self-titled debut album releasing that same year, while Joel also toured alongside some of the best beatboxers in the world. From entirely humble beginnings to primetime and now, as of 2022, returning to doing what he loves best, Joel is ready to share his passion and creative exploration with the world, as he concludes, “I got into beatboxing when I couldn’t afford a drum kit so I started making the noises with my mouth on the bus or at home or wherever I was. My older brother and cousin were already rapping from a young age so I started beatboxing on songs we wrote together. That’s how the Modern Day Poets were born. I have more music coming out after Mullet, and I’ll be playing guitar, bass and beatboxing just like people remember. And you might even hear Modern Day Poets on some upcoming tracks…”.

Fans of both Joel and literal mullets can catch the new track Mullet, as well as an array of his earlier works, on full display on Saturday August 20, with Joel appearing live at Mulletfest in Dubbo. From its first ever event back in 2018, Mulletfest has grown into an internationally acclaimed affair, celebrating the lifestyle of the mullet in all its glory, while also raising money for the Mark Hughes Foundation for research and care for those who have been diagnosed with brain cancer.

With an Australian Idol reboot slated to return to screens in the next 12 months, after a decade of being off-air, which also coincidentally marks nearly the exact amount of time between new releases for Joel, Mark Holden himself couldn’t speak higher of the beatboxing wunderkind that stole the show back on 2003 alongside the likes of Guy Sebastian, Shannon Noll, Paulini and countless other Aussie household names. Perfectly summed up by Mark: “Australian Idol 2022 should be so lucky to find a singer let alone a writer, producer, guitar player like Joel who also happens to be a world beatbox champion”.

Mullet feat. Macca the Rappa is out now!

Lucky Scene: WIN new releases from SHOCK for the kids or the kid in you.

LUCKY SCENE: For your chance to win one of the following DVD releases from Shock, simply: Subscribe to the What’s My Scene newsletter *If you’ve already subscribed, just let us know in your email. Email win@mandyh30.sg-host.com with the name of […]

Q&A with Dave Larkin ~ Dallas Crane Tell us about your new single/ album/ tour? Well our new single Get Off The Dope is a bit of a preview to the forthcoming album, and we’ve […]

When I’m not working in the studio or doing shows I’m at home with my partner and our baby so I guess they are my scene.
Way of the Eagle
Our scene is this big gorgeous wide world we live in all its majestic splendour!
Kim Salmon, The Darling Downs
Aside from music and everything creative, I love open-mind people, unexpected humour, seeing the world and nature, riding my bicycle, playing billiards. I’m also a fan of coffee, whiskey and most things vintage.
Jessica Stuart Few
My scene is Brunswick. I love it. It provides me with just about everything I need.
About Charlie Marshall
Well these days my scene tends to revolve around my computer and being nudged by my dog to take her out for a walk. And then having my wife shout at me for spending time on my computer. I’m loving it actually. I’m quite relishing that scene. I miss them both very much.
Peter Hook, Joy Division/New Order/The Light
Anywhere there is good company, great conversation, and a glass of red.
Helen Perris
“Malcolm Hill is a lifetime member of the Melbourne Music Mafia and part of the ratpack of post punk Melbourne artists who have been keepin’ it real across diverse art forms for thirty years.”
Malcolm Hill
World/folk. Acoustic and proud of it!
Ilana Cravitz, The London Klezmer Quartet
I am a simple man. My scene is simple. I like playing metal and spending time with my family.
Waclaw ”Vogg” Kieltyka, Decapitated
Book clubs, philosophy and extreme black metal
Elsen Price
Our gigs have an air of danger and sex. Beautiful women are free to express themselves and are as dangerous as hell. Everybody can have a good time ’cos there’s a lot of love in the room and we just can’t help but stomp out that primeval swamp boogie ooze.
Chris Russell’s Chicken Walk
The dog park’s pretty good. I have a couple of miniature pinchers. And they’re the loves of my life. I take them for walks to the dog park; I’ve got a Harley Davidson I ride around. It’s not too exciting. It used to be sex, drugs and rock n roll; now I walk my dogs.
Stan Lee, The Dickies
All of the above and more in my shed every Friday night
Hound
Cool small bars with good food, good wine, good company
The Backsliders
Melbourne. Nowhere else is as great as Melbourne.
Brat Farrar
I like to think that I belong to the head-strong Independent Music Scene – where we – musos and audience and everyone in between – all make gigs/tours, recordings, releases happen for ourselves and work our arses off to keep it going for the rest of our lives – all for the love of Music!
Florelie Escano
Deep 70s disco, wonky synths, shady lyrics, fairy lights and cheap wine.