Announced in Sydney on Saturday the cast include, Gareth Keegan (Jersey Boys, MTC’s Next to Normal, Hugh Jackman – Broadway to Oz concerts) as the central role of Galileo. Erin Clare (Heathers, The Phantom of the Opera) will be Scaramouche. Brian Mannix, formerly the lead singer of 1980s band Uncanny X-Men, will return to the musical stage as Buddy and Killer Queen, will be played by the extraordinary Casey Donovan (The Sapphires, Rent).

The worldwide smash-hit musical by Queen and Ben Elton, WE WILL ROCK YOU, begins a new national tour in Sydney from April 2016, the Melbourne season commences on the 30th August at the Regent Theatre.

WE WILL ROCK YOU reflects the scale and spectacle that marked Queen’s live performances and earned the band its pinnacle position in rock history. With Queen’s Brian May and Roger Taylor as music supervisors and “a band without parallel in the theatre” behind the cast, the audience can expectWE WILL ROCK YOU to rock as fiercely as the best of Queen’s concerts.

Since 2002 over 15 million theatregoers in 17 countries have been thrilled by this awe-inspiring production based on the songs of Queen with a book by Ben Elton (The Young Ones, Blackadder, Popcorn). Elton fashioned this hilarious futurist comedy around more than 24 of Queen’s biggest hit songs including We Are the Champions, Radio Ga Ga, I Want To Break Free, Somebody To Love, Killer Queen, Don’t Stop Me Now, Under Pressure, Bohemian Rhapsody, Another One Bites The Dust and of course, We Will Rock You. 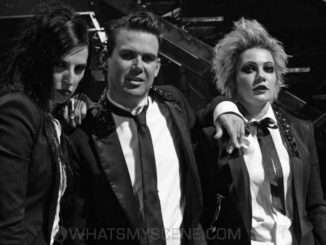