Stevie Nicks is best known for her work with Fleetwood Mac, however the influential ‘Queen of Rock and Roll’ has also had a chart-topping solo career. Her body of work has produced over 40 Top 50 hits and sales of over 140 million records, making her one of the best-selling music acts of all time. The thousands in the crowd were delighted when Chrissie Hyde of the Pretenders joined her on stage for a rendition of Stop Draggin’ My Heart Around.

About Paul Miles 140 Articles
Paul Miles is a rock photographer specializing in live music photography, who captures the true spirit of rock’n’roll in action by many of the world’s greatest performers. Over the years, he has shot a vast array of rock music photography: from gigs in world-famous clubs like the Apollo in Harlem and the Whisky a Go Go in Hollywood, to iconic arenas like New York City’s Madison Square Garden and Australia’s MCG, as well as in retail stores Barnes & Noble, Apple, and John Varvatos CBGBs.
Contact: Website Twitter 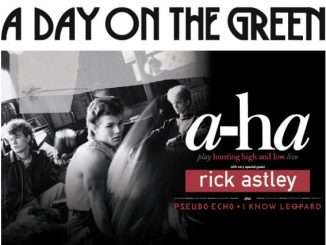 Scene News: a-ha’s First Australian Tour in 34 Years With Special Guest Rick Astley at A Day On The Green + Indoor Shows in February-March 2020

Review Scene: A Day on the Green with Stevie Nicks & The Pretenders, Rochford Winery, 18th November 2017