This lineup intrigued me from the outset. Blondie and Cyndi Lauper were billed as double headline acts for this tour and were alternating between last and second last slot each night. Both headliners from New York, Blondie rising to prominence in the 1970s new wave/punk scene and Cyndi Lauper finding her niche in the quirky pop genre that epitomised the 1980s. Both stylistically quite different in my mind and both with a traditionally contrasting fan base.

Alex Lahey, a young Melbourne singer songwriter opened the day with her original guitar driven rock pop. Lyrically, her songs were based around the life she leads – going on dates to the movies, going out on the weekend, studying, break ups and parties. She has the honest and down to earth flavour reminiscent of Courtney Barnett and it will be interesting to see and hear her musical journey unfold.

Next up was Montaigne aka Jessica Cerro. Hailing from Sydney and a Triple J favourite, she hit the stage with plenty of energy both vocally and physically in her movements. She was quirky and full of beans; the only time she stood still was when she played acoustic guitar and it was then that I got a truer sense of the songwriter as opposed to the performer. Backed with keyboards, bass and drums Montaigne certainly maintained a high level of theatrics in her performance and kind of reminded me of a cross between Kate Bush and David Byrne. This made sense in my mind given her explanation to the crowd that her music is largely based on the music of the ’70s and ’80s.

While Lahey appealed to the punk rock Blondie fans, Montaigne was firmly in “She’s so Unusual” camp of the Cyndi Lauper fans. Then came the Clouds, literally and figuratively, accompanied by a constant bucketing down of rain throughout their entire set. It’s been over 20 years since I saw them and I was eagerly awaiting a chance to hear them play some of the material from their new EP Zaffre. Songwriters Jodi Phyllis and Trish Young picked up right where they left off sound wise. The harmonies were spot on and glorious and their melodic style of pop was like the binding glue in this lineup, the bridge between the styles and fan bases of both headline acts. The EP’s lead track Mabel’s Bookshop sounded solid in the live format and slotted in perfectly along side old favourite Say It from their 1991 Penny Century album. They managed to get the first minute of Hieronymous out before announcing that they had to stop playing due to the lightning strikes that were closing in.

In an unexpected turn of events it was announced that the main stage was being shut down until the inclement weather had passed. Patrons were urged to take shelter in their cars until further notice and to stay away from the trees and speaker towers. It didn’t seem like this rain would ever stop but after an hour had passed, miraculously, Blondie hit the stage at their scheduled playing time and the rain eased up.

I had to remind myself that Debbie Harry is a woman nudging 72 years of age as she burst onto the stage singing One Way or Another. Her voice was strong and clear and ageless, much like Clem Burke’s drumming. Where I was standing, there were young guys slam dancing like it was CBGBs in 1977, whether immersing themselves in the New York punk ethos or just alcohol was indeterminate but the joy in the crowd was certainly evident as they rolled out all the hits. Call Me, Rapture, In the Flesh, Heart of Glass along with a great version of the Beastie Boys classic Fight For Your Right were crowd pleasers and the energy was amazing given that the majority of punters were soaked to the bone and covered in mud. There were a few songs slotted into the set from their yet to be released Pollinator which is predominantly a collaborative album with outside songwriters. Having had a preview listen of the entire album a few days ago, I can happily say that it gets back to the quintessential Blondie ‘band’ sound. For me, the standout of these new tracks in the live set was the Johnny Marr penned My Monster. They closed with a dreamy rendition of Dreaming which surprised me at first but then I was reminded that it has recently had a resurgence with a placement in the Train Spotting sequel.

Cyndi Lauper sure had her work cut out for her after such an inspired and rocking performance by Blondie. She bounced onstage with a suitcase and wearing a bowler type hat atop her pink hair and opened with Funnel of Love from last year’s Detour album. This certainly signalled a detour in musical style in comparison to Blondie. While confusing at first, it was a smart move to totally switch gears from the get go – this was her show and I reckon the bulk of the people out there were here to get in touch with their inner Cyndi and embrace the quirk of their inner ’80s. From country into the electro pop of She Bop complete with recorder solo, followed by I Drove All Night, Lauper really had the crowd now, complimenting them on enduring the weather, noting that it was “getting all Glastonbury out there” and that “Australians are a hardy bunch!”.

She continued on the country theme with a cover of Patsy Clyne’s Walking After Midnight and a song she wrote when she was in her rockabilly band The Blue Angels called Witness. I had never pegged her for being into rockabilly but hearing these songs, it all made sense. Highlights were Goonies R Good Enough and her cover of The Brains’ Money Changes Everything with that distinctive melodica line and probably my personal favourite song of hers. By this stage she was rolling around on the floor and getting really fired up. Seeing this, I suspect Montaigne might have stolen a few of these moves from Cyndi and adopted them as her own!

Lauper’s band was solid and tight and supported her every step of the way, despite a few issues with monitors. The solo dulcimer start to Time After Time set the run home up perfectly, building into the songs that she is best known for – Girls Just Want to Have Fun and True Colours. Both these songs came with a political and personal spin but were ultimately the songs that the majority of the crowd weathered the storm to hear. Looking around at the smiles on people’s faces as they were leaving, the inconsistency of the weather certainly didn’t hamper the enjoyment of a consistently great day of music.

About Maryanne Window 35 Articles
Maryanne is a writer and bass player. You can find her onstage with Monique Brumby. 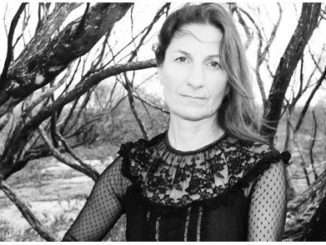