Rob Snarski and Mikelangelo first met in 1997, Mikel was lying in a coffin dressed as Elvis and Rob was gazing down at his seemingly lifeless body, singing to him – thus began their first collaboration. Fast forward 20 years and the two crooners are performing their first double headline shows together.

This was a rare opportunity to hear the honey voice of Snarski with the velvet baritone of Mikelangelo. Each sang a solo set of original material, and then joined each other to re-interpret classics such as Nancy Sinatra’s Bang Bang and Ricky Nelson’s Lonesome Town. They also reimagined their solo songs as a duo, including selections from Mikelangelo’s critically lauded album City Of Dreams and Snarski’s acclaimed, award-winning solo album Wounded Bird. 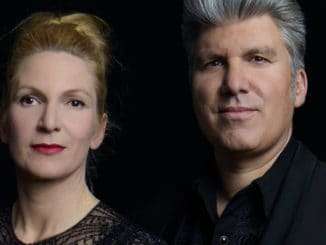 I love being on a little boat near home in South West Victoria with a fishing line in the water, the Sun coming up or going down. I also love walking the streets of Melbourne or Manhattan or many of the beautiful towns and villages of Ireland or anywhere. My partner and my family are central to it all. I also love being in the midst of a great music session, anywhere, anytime, being transported into the soul of the Universe.
Shane Howard
The car wash scene from Cool Hand Luke will do just fine thank you.
Old Gray Mule
I like to think that I belong to the head-strong Independent Music Scene – where we – musos and audience and everyone in between – all make gigs/tours, recordings, releases happen for ourselves and work our arses off to keep it going for the rest of our lives – all for the love of Music!
Florelie Escano
The TV show “Full House
World Wild

When I’m not working in the studio or doing shows I’m at home with my partner and our baby so I guess they are my scene.
Way of the Eagle
Staying home out of harms way.
Peter Milley, Cairo Club Orchestra

I’m in with the Out-Crowd
Dave Warner
My scene is a Punk-hardcore scene or an underground, minimal electronic scene, something grungy – where everyone is wearing black. That’s my vibe; don’t go out until 11 when all the other vampires come out and go home when the sun comes up at 7. Oh shit. Creatures of the night.
Greg Puciato, Killer Be Killed & Dillinger Escape Plan

Flanelette pyjama pants.
Timberwolf
Our scene is this big gorgeous wide world we live in all its majestic splendour!
Kim Salmon, The Darling Downs

My scene is driving fast cars and shooting guns.
Ace Frehley
Our scene is folk that are interested in change. Not just music, but breaking the norm, the boundaries and stereotype of Australian ’rock/pop’ music. Unpredictable, the question marks, the new jokers in town. Don’t Believe The Haze.
Slumberhaze

Right now it’s a room with no lights on. An unmade bed. A laptop with 9% battery and a mosquito that just refuses to die.
Dave Larkin, Dallas Crane
We can be dirty, we can be imperfect, we can be classy, it doesn’t matter. We drift between scenes and eventually may just create our own.
The Ugly Kings

Leadfinger is a very strange band, hard to define, but we are free.
Stew, Leadfinger
Currently its the Yarra River Trail I’m walking along. Generally my scene would be Melbourne. Nothing feels or compares to home.
Simon McConnell, The Delta Riggs
I will continue the continuum, singing my Songline.
Kutcha Edwards